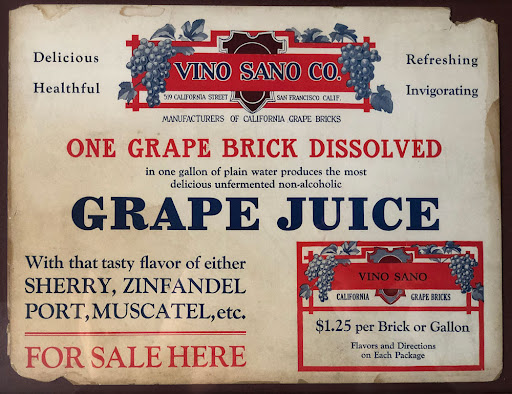 A two-paragraph front-page story headlined "Mabel's" in The Chariton Leader of Oct. 6, 1931, caught my attention the other day and sent me off on a quest for more information. Ninety years later, some explanation is required. Here's the text of the article:

Mabel Willebrandt's highly disputed vine bricks made their first appearance in Chariton this week at the Ritz drug store. The bricks have found a brisk trade in Chariton and according to reports many people are following the well defined rules to prevent the grapes from fermenting and then, of course, becoming contrary to the law.

The carefully worded rules on the vine brick box read in a negative manner as they tell how to prevent the bricks from fermenting. The bricks have won Mabel Willebrandt unusual fame among newspapers of the world, her connection with the vine brick company following shortly after her resignation as Assistant Attorney General of the United States.

Mabel Willebrandt (1889-1963, left), was a pioneering woman attorney from California who served as U.S. Assistant Attorney General from 1920-1929, tasked primarily with enforcing the Volstead Act, the enforcement mechanism for Prohibition, constitutionally mandated in the United States from 1920-1933.

And enforce she did, with considerable zeal.

But during Willebrandt's tenure, California's young wine industry had come up with an innovative way to save itself --- Dehydrated grape juice packaged as small bricks that could be commercially marketed and then rehydrated at home (or elsewhere).

All of these products, and there were various brand names, contained a packaging disclaimer that read something like the following, "After dissolving the brick in a gallon of water, do not place the liquid in a jug away in the cupboard for twenty days, because then it would turn into wine."
Willebrandt, so long as she remained in office, ruled consistently that that the bricks --- even when reconstituted and sold commercially as unfermented grape juice --- were not in violation of the Volstead Act. So they became known by some as "Mabel's bricks."
Prohibitionists found this extremely frustrating even though the attorney general's ruling was technically correct.
Two other factors came tangentially into play as well. It was never illegal during Prohibition to consume alcoholic beverages --- just to manufacture, transport and sell them. Then, as now, it remained legal to manufacture at home up to 200 gallons of wine annually for personal consumption --- so long as it never left the home where it was produced or was sold.
+++
When Willebrandt stepped down as assistant attorney general in 1929, she went to work for (among other clients) Fruit Industries Ltd., a front for the California Vinyardist Association and manufacturer and marketer of Vine-Glo, one of the concentrates.
Willebrandt's new job embarrassed the government and moved grape products directly into the line of fire.
During October of 1931, the same month Chariton's Ritz started carrying the bricks, a federal judge ruled in United States v Brunett that grape concentrate could not legally be used to make fruit juice. The court decision was affirmed by the director of the Bureau of Prohibition, who announced grape concentrate would no longer be exempt under section 29 of the Volstead Act that allowed the sale of non-alcoholic grape products.
It's interesting to note that Vine-Glo had been developed by Joseph Gallo, father of post-Prohibition vintners Ernest and Julio Gallo.
Whatever the case, "Willebrandt's bricks" didn't remain on the shelves at the Ritz for very long. But Prohibition's days were numbered  and the concentrates had saved the U.S. wine industry, allowed to develop freely once the 18th Amendment was officially repealed (by the 21st) on Dec. 5, 1933.
Posted by Frank D. Myers at 7:32 AM

Wouldn't it be nice to be able to store these concentrated, dehydrated grape juice bricks? Emergency food storage! Perhaps we can freeze dry grape juice!.

Wouldn't it be nice to be able to store these concentrated, dehydrated grape juice bricks? Emergency food storage! Perhaps we can freeze dry grape juice!.