Fred and Adellah Spiker and their farm 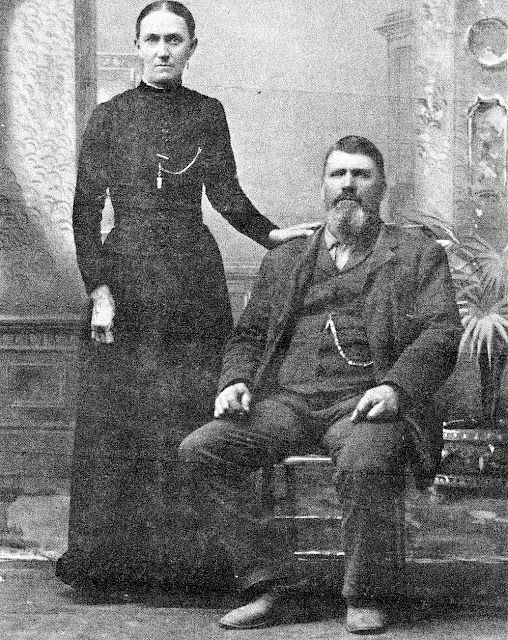 Joseph Frederick "Fred" and Adellah Spiker (above in an image found at ancestry.com) were not exactly typical Lucas County farmers --- they owned more acres than most and operated on a larger scale than a majority of their neighbors just northeast of where the village of Williamson eventually would be located.

During August of 1882, the editor of the Chariton Democrat-Leader called at the Spiker farm and published a profile of their operation in his edition of the 24th.

Fred (1837-1915) was an Ohio native who grew up in Illinois where he married Adellah Brightwell (1839-1908) during 1857. They farmed in Illinois until 1875 when they relocated to Iowa, perhaps attracted to Lucas County because some of Adellah's siblings already had settled here. There were eight children --- seven sons and a daughter.

The Spikers were neighbors of my family in that neighborhood and all were early and enduring members of Central Christian Church, established where Williamson now is during the 1890s. During 1903, Fred and Adellah retired and moved into Chariton, where both died.

Here's the text of the Democrat-Leader report --- a snapshot of sorts of a prosperous Lucas County farming operation some 140 years ago:

We had the pleasure this week of visiting another of the extensive farmers and stock men of Lucas county, Mr. Fred Spiker of English township. Fred came to this county about seven years ago from Hancock county, Illinois. His first purchase was a half section of land, but he has added to it until at present his broad acres number about twelve hundred.

On this ranch  he now has 170 head of cattle, 200 head of hogs, 40 head of horses and mules, and 500 head of sheep. He also keeps 25 milch cows, the surplus product of which he disposes of to the Chariton Creamery.

The farm and everything about it wears and air of thrift and enterprise which at once attracts attention. During the past year he has built a fine residence and a large and commodious barn. His residence is a model of neatness and comfort combined. Fred was his own architect, but we opine he received valuable suggestions from his excellent lady who presides over it. His barn is about 50x60 foot, and at present he has stored in it between 75 and 80 tons of hay, all of which he succeeded in saving in first-class order. Near his home place he has about 50 tons saved in what he called (if we remember rightly) a "barrack." It is simply a roof which is made to slide up on five poles. He raises the roof just as he increases the quantity of hay, and when all the space between the poles is filled, he allows the roof to slide down on it.

He has given close attention to fruit, and now has the satisfaction of seeing eight orchards all in good thrifty condition and all bearing. He was one of those who seemed to know that Iowa was a good fruit country, and now he has his expectations realized.

Everything about his farm looks well except his corn, and he has one field of that which is not surpassed by any we have seen in the country. He says he feels confident that he will get 50 bushels from all told. He is, however, getting his farm down to grass as rapidly as possible, and then it will be a perfect beauty. It is almost enough to make one wish he were a farmer when driving over such a ranch as Fred has.