The Waynick sisters and "saccharine diabetes" 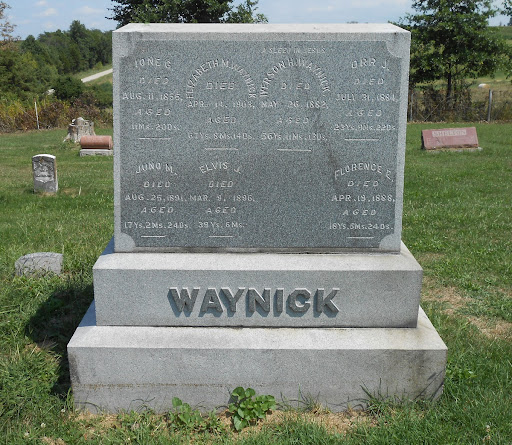 This mighty chunk of granite in the Waynick Cemetery, southwest of Chariton, marks collectively the graves of Iverson H. and Elizabeth (Mitchell) Waynick, seven of their 10 children and a grandchild. Each has a substantial headstone inscribed with his or her given name, too, so it's a most efficient (and expensive) way of organizing the deceased.

Daughter Sue (Waynick) Valentine is commemorated on the south end of the big monument; and daughter Lulu (Waynick) Crozier and her infant are commemorated on its east face where "Crozier" is carved into the base. The empty spot next to Elvis's inscription most likely was intended for her husband, Wiley M. Householder, but he remarried after Elvis died and is buried instead in the Chariton Cemetery.

Lulu was the first wife of prominent Chariton merchant James T. Crozier, also buried with his second family in the Chariton Cemetery, so it's likely that he along with some combination of surviving Waynick siblings footed the bill for all of this.

At least three of the Waynick siblings --- Lulu, Florence and Juno --- died of diabetes, generally fatal before insulin was first used in 1922 to treat it and a disease that sometimes runs in families, but rarely to this extent.

I happened upon Juno's obituary while exploring what had happened in Lucas County 120 years ago, during August of 1891, and was mildly surprised by the detailed description of her death but interested in the fact a little medical history of the family also was included. Here's the obituary from The Chariton Herald of Aug. 27, 1891:

"Miss Juno returned from a visit to her sister at Kansas City last Thursday, somewhat impaired in health, sang in the Methodist church choir on Sunday, took to her bed on Monday and at bedtime Tuesday night was a corpse. Thus three of the this family have died within a few short years with this same dread malady.

"Juno was an interesting young lady with a large circle of friends to whom her sudden demise is a painful shock. Her aged mother, bowed down with her load of grief, and sorrowing brothers and sisters have the deep sympathy of the entire community. The funeral services will be held this afternoon at 3 o'clock at the M.E. Church, conducted by Rev. Austin, and the remains interred in the Waynick cemetery southwest of Chariton."

As a footnote, it would appear that Iverson and Elizabeth were somewhat adventuresome when naming their children. Juno was the female counterpart of the mythological Jupiter, so that makes sense. Elvis, however, was (and is) an almost exclusively male given name, popularized by a musician widely known in some circles years ago.