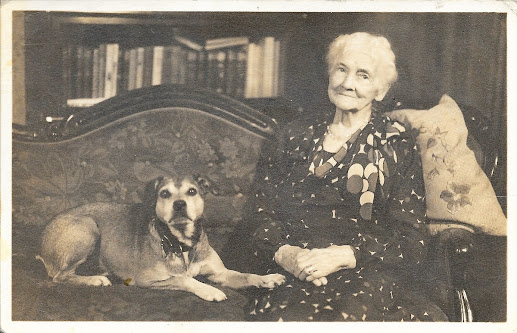 This is among my favorites of the various photographs that have been added to the Lucas County Historical Society collection recently --- an image dated Oct. 28. 1934, and inscribed, "Grandmother and Buddy, Ninety and Nine."

This is Mira, who had celebrated her 90th birthday the previous July, and Buddy, the pet of her grandson, Albert Brisbine Gookin Sr. (1909-1979), father of A.B. Gookin Jr. Buddy was nine years old at the time. The photograph was found in the McFarland family Bible, also now in the historical society collection.

The McFarlands were married during August of 1865 in Ohio --- five days after Capt. McFarland was discharged honorably after four years of service during the Civil War with the 6th Ohio Volunteer Cavalry. The following February, they moved west to a farm in Cedar Township, Lucas County, where they lived until moving into Chariton where James operated several mercantile establishments.

When he died at age 84 during January of 1925 he was the last surviving charter member of Daniel Iseminger Post 18, Grand Army of the Republic.

Their daughter, Maude Mary McFarland, married Albert Burton Gookin (a distant cousin of mine) and her parents lived with them in their old age in the Gookin family home at 408 North Main St. in Chariton, just east of the Sacred Heart rectory, where this photograph most likely was taken.

I am happy you liked the photo. A.B. Gookin III

I remember her as a small kid. She was a good friend to my Great Aunt, Leona Smith, who lived 3 houses further north on the same street. My 2 sisters and I often stopped at "Aunties" home after a movie and Cobbs ice cream to wait on our mother to pick us up and take us back home to Williamson. Sometimes, Mrs. Gookin was there visiting or Auntie would take us up to her house for a short visit.