Decoration Day "everywhere but in Chariton" 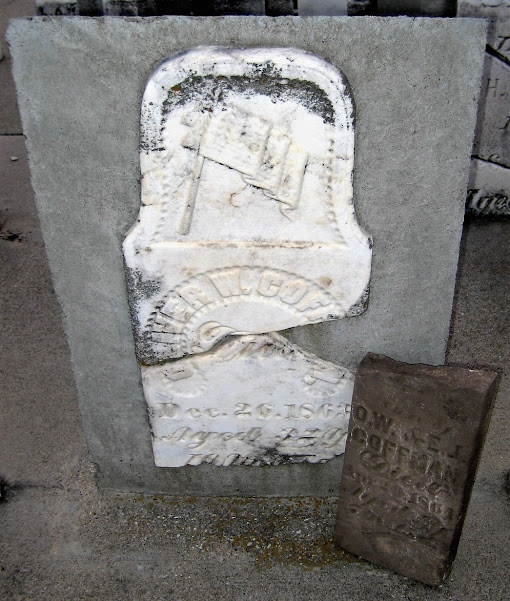 The practice of observing Decoration Day (now known as Memorial Day) seems to have caught on rather late in Chariton, seat of a county that had lost more than 150 of its young men during the late Civil War --- and W.H. Maple, editor and publisher of The Chariton Patriot, was incensed.

"Have we no soldiers buried in our cemetery? If so, would it not be well to honor their memories by scattering a few flowers on their graves the 30th inst.? Every other town almost observes 'Decoration Day' with some appropriate ceremony and by adorning the graves of Union soldiers with a few flowers, and why not Chariton?" he asked in his edition of May 19, 1875.

Decoration Day had been widely observed in the North since 1868, when Gen. John A. Logan, commander-in-chief of the Grand Army of the Republic, called for a national observance to recognize the sacrifice of the Union dead. Most states obliged, setting May 30 as the date --- primarily, it would seem, because the best selection of fresh flowers with which to decorate graves would be available on that date.

By 1875, Chariton was served by two cemeteries --- the Chariton Cemetery, then 11 years old, and Old Douglass, with origins dating back to the first Euro-American settlement of the county. And there certainly would have been graves to decorate in both.

And some veterans had died, too, during the 10 years after the war had ended, including brother physicians Dr. Joseph Jay, died July 28, 1866, and Dr. Henry Jay, died Dec. 28, 1868, who had ruined their own health while caring for young men serving in Iowa units during the war. They are buried in the Chariton Cemetery.

Mr. Maple's lament in that long-ago Patriot edition was quite long and continues as follows:

It may do the fallen and dead ones no good, but yet we believe, in as much as gratitude is all we can pay them, that they should be remembered by some such token of regard as the above.

It is but a few years since many who are now mouldering beneath the heavy clods that bear them down in their narrow chambers, were baring their breasts to the enemy and braving the storm of battle for our common good. And is it possible that they are so soon forgotten?

We do not know how many of the boys in blue are lying in our little city of the dead, south of town, but there are, doubtless, some noble, brave-hearted souls there who are calling upon us from their home beyond the river not to forget their daring and patriotism that prompted them into the deadly breach and caused them to be taken prematurely from us.

It is hard to estimate how much of present enjoyment and prosperity we owe to the defenders of our flag and our union, but doubtless much, and this debt we should pay by a kindly remembrance of their service. It seems but yesterday when armed thousands were striking at the country's life, and when the flowing blood and the ghastly upturned faces of fallen heroes reminded us that war, terrible and unrelenting, was upon us, and that it was necessary that some breasts should be bared for the conflict, that our altars and our fires should be protected from the invader, and our government be saved from the traitors' hands that assailed it.

But how little do we now think of the patriotism, the trials and the fortitude of the Union soldiers, and the sufferings of those who died on the battlefield or in the hospital away from home in friends? It may not be the most pleasant reminiscence in which we could indulge, but we believe that it is a profitable one and one we owe ourselves and those whose memory we would honor, and we, therefore, make the suggestion that arrangements be made to strew some fragrant blossoms on the graves of our soldier dead on the coming Decoration Day.

Who knows what pleasure it may give the departed ones, or what incense it may be before the God of battles, who is also a God of gratitude, who delighteth in giving "honor to whom honor is due."

If Mr. Maple were expecting a response to his editorial from the community, he was disappointed. His report in the June 2 edition of the Patriot was brief --- "Last Sunday was Decoration Day everywhere but in Chariton."

A few years later, during the fall of 1879, Daniel Iseminger Post No. 18, Grand Army of the Republic, was organized in Chariton --- and after that Decoration Day programs, some of them quite elaborate, became a regular part of life in Lucas County.