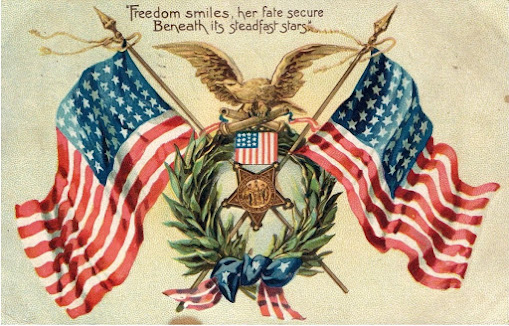 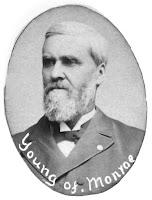 Nine years later, during May of 1884, Lucas County was well on its way to establishing a tradition of remembrance that would endure throughout the remainder of the 19th and much of the 20th centuries as hundreds gathered to honor the fallen annually.

The featured orator that Memorial Day was Josiah T. Young (1831-1907), Civil War veteran, lawyer, sometimes newspaper editor and politician, who was serving as Albia's mayor at the time. During the 1870s, he had served Iowa as secretary of state and during the 1890s, would serve the area as state representative.

Memorial day in this city was celebrated by the largest assemblage of citizens, young and old, that ever came together in Chariton to honor the nation's dead. It was a beautiful day, and throughout the program was carried out without delay or tiresome waiting.

The G.A.R. turned out in their new uniforms, and the old fellows quickened their step as the drum corps struck up the old familiar tunes. The Gayoso Encampment, K. of P., and Odd Fellows turned out. The fire department made a fine display.

After strewing the graves with flowers, the people returned to the courthouse square and were addressed by the Hon. Josiah T. Young, of Albia, the orator of the day. Mr. Young's address was replete with the memories of the past, as well as the great lessons the war taught this people. We can't repeat the story too often.

The moral government of the universe takes note of the conduct of nations as of individuals, and no nation in the history of the world has been able to trample under foot the great principles of justice and moral law with impunity.

We, as a people, had acquiesced and defended the most cruel system of human slavery in all history. A revolution was sure to come. The most advanced minds perceived the danger and warned the nation of the coming storm. But we were too busy making money and would not listen, but derided those whose prophetic vision pierced the future as fanatics, and the people stoned and cursed them.

When the guns at Sumpter awoke the people of the north, they found the black demon of slavery at the throat of the nation. Liberty was to be strangled because the nation could not endure half slave and half free. In the great struggle which followed, freedom conquered and a new nation was born, under whose protecting power the humblest citizen finds security.

These men whom we honor died that liberty might not perish from off the earth. The war was a mighty conflict between two distinct systems of civilizations and ideas of government, and we know that the right prevailed. These are the great facts of history not to be forgotten.

Miss Alice Rea recited a poem, "The Nation's Dead," and was warmly applauded. Altogether the day and the heroic memories were most faithfully commemorated in Chariton.

The citizens of our neighboring town of Lucas observed Memorial day with very appropriate ceremonies. All the Sabbath schools and churches, as well as a number of orders, turned out, and the day was spent in singing, speech making and social talk and enjoyment.

Short and impressive addresses were delivered by John R. Evans, Adam Fletcher, George Reeside Esq., and J. Y Stier, editor of the Lucas Ledger. A fine brass band and drum corps furnished the instrumental music, while the air was vocal with the singing of hundreds of Sabbath school children, conducted by Mr. Richards, of Lucas, and Mr. Wm. Jones, of Cleveland.

The people of Lucas and Cleveland do wisely to bring the children together on decoration day and teach them the never-to-be-forgotten story which the day commemorates, and the lessons of national history it teaches, in having them join in singing of the deeds and patriot services of the dead heroes. In thus keeping alive in the hearts of the young the memory of what it cost to preserve the nation, our neighbors set an example that might be profitably followed by larger communities.