The rise and decline of Russell's Keystone Mill 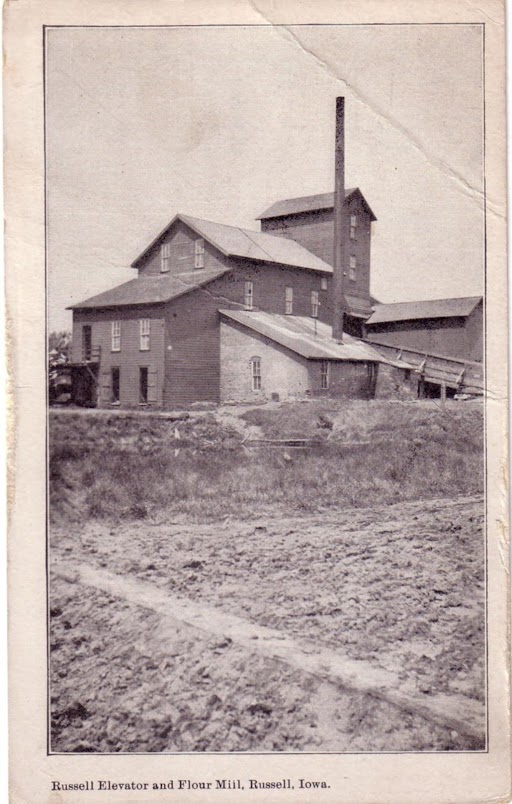 Long ago, when I was a kid and giants roamed the land --- before Russell's first water tower --- this building's successor, constructed during 1915 by the Eikenberry Grain & Lumber Co., dominated the skyline. Although long abandoned, it had endured more than a century when it was destroyed by fire during August of 2019.

The first part of this older structure had been built about 1870, three years after Russell was founded along the new tracks of the Burlington & Missouri River Railroad, at a time when the agricultural economy was substantially different. Wheat was a major cash crop in Iowa then and flour was not shipped to grocery stores by rail --- it was milled locally.

That all changed after 1870, when Turkey red wheat was introduced to the plains of Kansas by Russian Mennonite immigrants and Iowa's flouring mills for the most part became redundant in the years that followed, shifting instead to the handling of other grains.

Eikenberry & Stewart acquired the mill about 1890 and built the elevator additions, then 25 years later, during 1915, decided to replace it with an entirely new structure, as reported in The Chariton Leader of April 22:

W.A. Eikenberry has commenced the erection of a new mill and elevator at Russell, similar to the one the firm has at Chariton, which is to be supplied with all modern appliances and machinery. The old mill and elevator there is to be torn down, having served their days of usefulness.

The main building was erected a little more than 45 years ago and was known as the Keystone Mills and for a time was conducted by G.C. Boggs and Frank Morgan, later Mr. Morgan retiring from the firm.

In the early days this mill did a big business, but when the system of agriculture changed and wheat culture declined the business at the mill fell off, and passed into other hands. Some 25 years ago, the firm of Eikenberry & Stewart came in to possession of the property and erected the elevator additions.

The original mill was built by Mr. Frye, a Pennsylvania gentleman of means and given to his son and son-in-law, Mr. Boggs, who afterwards represented Lucas county in the legislature and never has a better or more congenial man ever resided in Lucas county. The activities of the new country was attractive and Russell was selected as the site for this milling industry. 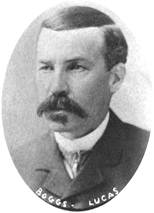 The builder of that first mill was West Frye, a prominent and prosperous Washington County, Pennsylvania, famer. It was built as an investment and was to be managed by his son, Robert B. Frye, and son-in-law, George Craghead Boggs. The name was a nod to Pennsylvania, known then and now as the "Keystone State."

The Robert B. Fryes didn't stick around long, moving first to Kansas, then to Colorado, back to Pennsylvania and finally to Colorado again.

G.C. Boggs (left) remained in the grain business, with partners, in Russell until 1884, when he was elected to serve in the Iowa House of Representatives, where he completed two terms. After that, he settled in Des Moines and shifted his business interests to real estate before eventually departing for Texas. He died during 1927 in San Antonio at the age of 80 and his wife, Martha Etta (Frye) Boggs, during 1931.

The only reminders in Russell of the Boggs are the graves of two of their infant children in the Russell Cemetery, Mattie Mildred, born and died during 1873, and Harley, 1881.

I remember playing in the room where the cobs were stored. We must have gotten really dirty but it was fun.

Also fishing in the mill pond and ice skating on the pond with an old tire burning to warm by.