A "dismal death bell on a stormy day" 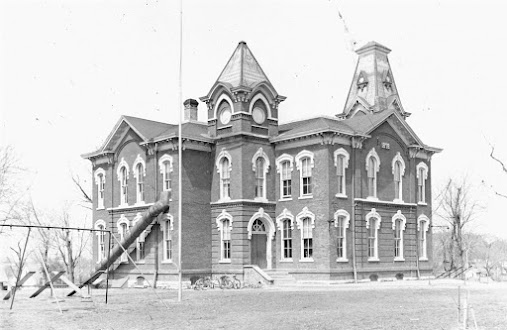 I came across a clipping yesterday, from The Leader of Jan. 18, 1879, noting that this magnificent Italianate structure --- the second of three incarnations of Chariton's Columbus School --- had just opened to students, homeless since its predecessor burned, most likely because of a faulty flue, during October of 1877.

That building, a massive and astonishingly ugly slab of brick constructed during 1868 on a hilltop southwest of the square that previously had served as the city cemetery, had been the Chariton's pride and joy. It's demise finally convinced city fathers (mothers, of course, hadn't been consulted) that Chariton needed a volunteer fire department, duly organized on Dec. 5, 1877.

The bell tower of the 1868 building had survived and as the shell was taken down, the bell was removed --- intact but badly damaged by the intense heat of the blaze. Arranged within a temporary cage, it still was in use when the new building opened as that Leader report makes clear:

"The new school house on the site of the old burnt one was thrown open on Monday for the schools. The old bell that went through the fire still swings to and fro, but it's music's not the same, dear Tom, t'was a year or two ago. The peculiar way in which it is rung, coupled with its hideous sound, reminds us of a dismal death bell on a stormy day."

Before long, however, a new bell --- dated 1878 and cast by L.M. Rumsey & Co. in St. Louis, arrived and was hoisted into the tower of the new building.

That bell, in as good a shape as it was nearly 150 years ago, now sits on a plinth in front of the third edition of Columbus School. It was retired during 1964 when the new Columbus opened and the old Columbus was torn down, but the clapper has been removed for security reasons and is stored inside. So the bell is silent. 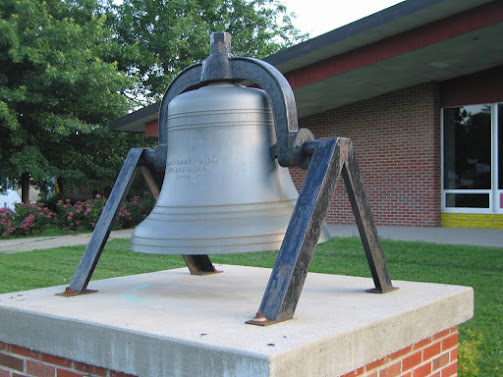 The name "Columbus," by the way, didn't come along until 1892. The building (and its predecessor) had previously been known simply as the "South School."

But overcome by nationwide excitement centered on the 400th anniversary of Christopher Columbus's arrival in the Americas, those city fathers (again) decided to name the building in the explorer's honor. And thus it has been ever since.