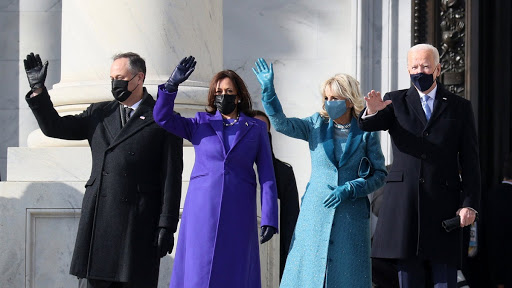 One more morning away from Lucas County-specific history --- but wow, what an historic day it was in Washington, D.C., and across the United States yesterday!

President Biden's magnificent inaugural address, the symbolism (and practical reality) of Kamala Harris as vice-president, the solidarity demonstrated by four former presidents (including Jimmy Carter, now too physically infirm to engage in such public pageants).

Then there was Lady Gaga's National Anthem and that magnificent poem by Amanda Gorman.

For fashionistas, how about Michelle Obama's outfit and Bernie Sanders' mittens?

The programming produced by the inaugural committee and broadcast well into the night, Parade Across America then an evening of entertainment, set a standard that I hope future inaugurals strive to live up to, allowing anyone who cared to tune in an opportunity to be fully engaged.

It seems a shame to even mention the most recent incumbent, now living in Florida, but it did feel as he flew away as if an abusive significant other had just been neutralized --- at least for a time --- and that there was a chance that the sort of hysteria these creatures create could, with time and effort, be neutralized, too.

But it's important to remember the lessons of the last few years --- just how dangerous a demagogue can be when he (or potentially she) engages and channels ignorance, religious fanaticism, racism, nativism and  the ungovernable thirst for power.

Iowa, at the moment, continues to be governed and represented in Washington, D.C., by Trumpian disciples, so I'm sure we'll be reminded. But at least for a few days it should be possible to take a few deep breaths and relax a little.

Yes to all you posted! Breathe!