From Indianola to a new life in South Dakota 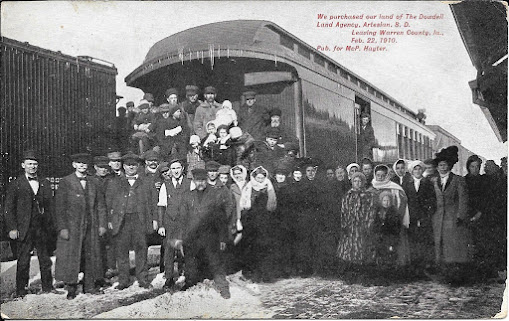 Museum intern Karoline has returned to her PhD program at the University of Illinois, Chicago, but we still had Trae on hand to entertain us last week --- and set him to work organizing the tail end of the Lucas County Historical Society's photo postcard collection.

These cards do not depict scenes from Lucas County, but there are a couple of hundred from elsewhere in Iowa, including this one, and more from other states.

This card. although set in Indianola, was mailed from Artesian, South Dakota, to A.C. Durham, who lived in Lucas County but had a Lacona address, and is dated May 17, 1910. The author didn't sign his name, but the card was a gift from the late Jimmie Durham.

Artesian is situated in southeastern South Dakota and was at the center of a region where many former Warren Countyans settled during the first decade of the 20th century in large part because of a business relationship between Robert E. Dowdell (1857-1931), newspaper publisher and Artesian-based entrepreneur, and W.H. Swank, an Indianola-based land agent.

Beginning in 1907, Dowdell paid several visits to Indianola to encourage farmers and investors in search of more land to join him in South Dakota and Swank marketed the region aggressively the rest of the time.

The text printed on the face of the card reads, "We purchased our land of The Dowdell Land Agency, Artesian, S.D. Leaving Indianola, Ia., Feb. 22, 1910."

I searched Indianola newspapers for references to a mass exodus during February, 1910, and came up empty --- but did find several scattered references to families who were pulling up stakes in Iowa and heading northwest.

A fairly common transport option for established farmers at the time was to commission a rail car (or a portion of one), load household goods, essential equipment and livestock aboard and let an iron horse do the pulling. 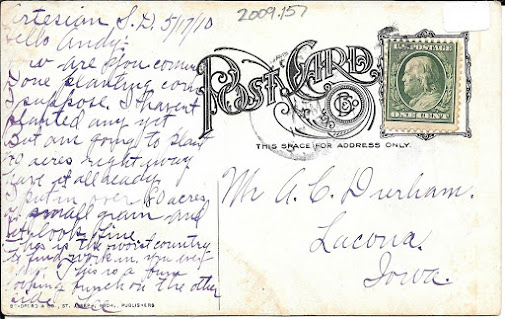