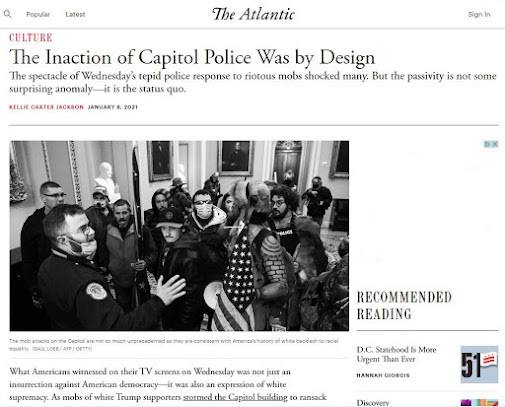 The major surprise in Washington, D.C., last week was not the mob mentality that prevailed for a time --- that probably was inevitable. Such is life when a manipulative demagogue like President Trump, enabled by clever provocateurs and craven opportunists, sets out to light the match under a powder keg of true believers united by resentment and convinced that Magic Jesus is on their side.
The surprise was how easily the mob penetrated the U.S. Capitol.
Kellie Carter Jackson suggests in an Atlantic article entitled "The Inaction of Capitol Police Was by Design" that it simply never occurred to security agencies that a white mob would (or could) turn deadly.
A social media friend asked last evening for "original sin" nominations --- ideas about sins of the founders of these United States with consequences that continue to be visited upon their descendants. There's little doubt that white supremacy expressed initially through genocide of indigenous peoples followed up by institutionalized slavery heads the list.
Posted by Frank D. Myers at 7:25 AM