A deadly start to year 1901 in Lucas County mines 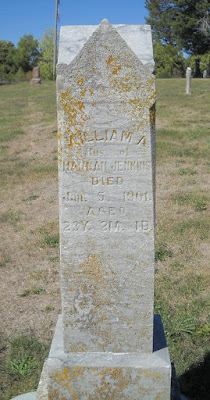 January 1901 in Lucas County brought with it a reminder of just how deadly the coal mining industry could be.

Two young men --- William A. Jenkins, 23, and Thomas Bennett, 31 --- who were working as shot-firers at the Cleveland (aka Whitebreast) No. 4 mine southwest of Lucas were killed when a faulty charge set off a dust explosion that killed them.

Shot-firers had one of the most dangerous jobs in a dangerous industry. They generally worked after other miners had left for the day, setting and detonating the charges that would blast from the seam sufficient coal to be harvested the next day.

Cleveland No. 4, opened in 1899 and closed during 1908, was the last of the big Whitebreast Coal Co. mines in the Lucas area. The earlier Whitebreast mines, Nos. 1-3, had been located east of Lucas and its coal town neighbor, Cleveland. By 1899, "east" Cleveland had for the most part been abandoned and the mining camp known as "New Cleveland" was built at the site of No. 4. 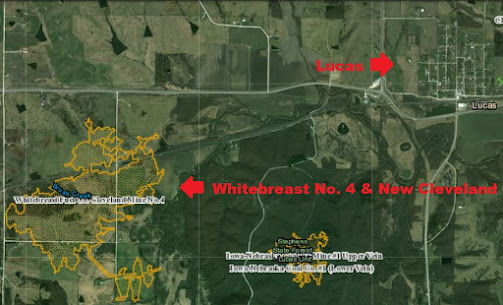 Here's an account of the accident, published in The Chariton Patriot of Jan. 10, 1901.

A fatal mine explosion occurred in the shaft of the Whitebreast Coal Company at Cleveland No. 4, last Saturday afternoon about 4 o'clock. The men had quit work and there was no one in the mine except the shot firers, six in all. The shots were placed, but it seems that one of the miners had drilled the hole a little too deep and a "windy" shot caused the explosion, and a dust explosion followed. Two men were killed, the two who went together to fire the shots, as is the way of doing. The force of the explosion was felt by the citizens and they immediately made investigation.

A party of men went down as soon as possible after the explosion and found that the men killed were William A. Jenkins and Thomas Bennett. The extent of damage to the mine was some doors blown off, fans for the air shaft broken, tools destroyed and the air shaft damaged.

The death of these men is indeed sad, as Jenkins was a young man and had been married only about one year. He leaves a wife and infant daughter only a few weeks old at Keb, Iowa, and his wife was still confined to her bed and unable to attend the funeral. He was buried Tuesday afternoon about 4 o'clock at East Cleveland, under the auspices of the Red Men lodge. Bennett leaves a wife and small daughter in Alabama. His wife was also sick and unable to come. His remains were taken to Eddyville on No. 10 Monday for burial.

No one else in the mine at the time of the explosion was hurt.

Thomas Bennett's remains were buried at Eddyville's Highland Cemetery; Jenkins' remains, in what now is known as Fry Hill Cemetery, founded to serve the original mining town of Cleveland.

Hannah Jenkins, who was living with the couple's son, Arthur, at the mining town of Keb in Wapello County when her husband was killed, moved at some point to Lucas County with her second husband, Orville Cowan. She had two additional children, Otto and Gladys, and died during 1968 at the age of 94. The Cowans are buried in the Chariton Cemetery.