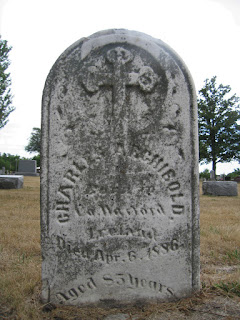 Thomas Kelly and his lady wife, Margaret, have shared a unique footnote to Lucas County history since 1886 as the only married couple convicted of murder. Or more accurately, Tom was convicted of first-degree murder; Margaret, of manslaughter.

Tom was 64 at the time and his wife, some 10 years younger. Their victim was an eccentric and miserly neighbor, Charles Archibold, 85. All three were natives to Ireland. That's Archibold's tombstone in the Chariton Cemetery at left.

I wrote first about the details of this sensational murder back in 2012 --- you can read the report here.

But to make a longer story short. The Kellys --- he a railroad section hand and she a washerwoman --- were entertaining their neighbor, Archibold, at the kitchen table in their home near the depot in northwest Chariton on April 6, 1886.

One or the other whacked the old gentleman over the head with a soldering iron. Margaret claimed later that she was reading poetry to Charles at the time and that it was her spouse who struck unexpectedly. Thomas declared that it was Margaret who delivered the fatal blow.

This charming couple then dumped the body through a trap door into their cellar, but retrieved it after nightfall, hauled it out and dragged the remains to his back door --- leaving a clear trail --- and left it there. Each accused the other of completing this task single-handedly.

At some point, one or the other Kelly (or both), found a tin can in Archibold's home containing $1,230 in cash, took it home and concealed it in their own coal shed.

Since each was declaring the other a cold-blooded killer and herself/himself an innocent bystander, separate trials were ordered. A Lucas County jury found Tom guilty of first-degree murder on Nov. 25, 1886, and he was sentenced immediately to life in prison and dispatched to Fort Madison, where he entered the state penitentiary on Nov. 26.

Margaret, who had better lawyers, was convicted of manslaughter during January of 1887, sentenced to a five-year term and arrived at the Fort Madison penitentiary on Jan. 21 or that year.

There is no further record of Margaret in available penitentiary records, so her trail goes cold here.

But Tom remained a prisoner for the next 14 years. Penitentiary records consistently describe his habits as "intemperate" and his mental culture as "poor." On April 20, 1891, he was among a number of prisoners transferred from Fort Madison to the new state penitentiary at Anamosa, established in 1873.

But during the late 1890s, as Thomas aged, a move began to obtain a pardon for him --- something that would require action by the Iowa Legislature. I know nothing about his children, but apparently there were some and they may have been involved.

Legal notice of his intent to seek a pardon first was published in Chariton newspapers during December of 1897 citing the reasons as follows:

"First, that since November, 1886, he has been confined in the state penitentiary, and if released his children will take care of him during the remainder of his life.

"Second, that he was a soldier in the Union army, a member of Co. A, 13th Maryland Volunteers.

"Third, that he is now an old man, about 76 years of age, infirm, and cannot live many years at best, that he will, if released, be unable to do violence to anybody, and it is believed he will have no disposition so to do.

"Fourth, that the law has been vindicated, and society needs no further protection from this feeble old man."

The 1897 application failed as did others in subsequent years, but during February of 1900, the Legislature acted in in Tom's favor. Unfortunately, there was a procedural error and he failed to gain his freedom. This little article, published in The Herald of Feb. 22, 1900, provides the details:

HE DIED A CONVICT

"Des Moines, Feb. 17 --- 'Number 2069 died at 7 o'clock this morning,' was the brief telegram that came to Mayor Warren S. Dungan yesterday from Warden Hunter, of the Anamosa penitentiary.

"Number 2069 was Thomas Kelly of Chariton, who was sentenced to the penitentiary for the murder of Charles Archibold, an old miser; and whose pardon would have been granted by the legislature today. The death of Kelly ends the history of one of the foulest murders ever committed in Iowa. Although Kelly paid the penalty of the crime, his wife, Margaret Kelly, who escaped punishment, was always supposed to have been more guilty than her husband.

"An interesting phase of the affair is that Kelly would have been a free man if he had lived a few days longer. An effort was made to obtain his pardon at the last session of the legislature, but it was unsuccessful. The matter came up again Thursday, and both house and senate passed a resolution for his pardon. After the action was taken, however, it was found that they had passed a concurrent resolution, whereas a joint one was necessary to free him. The matter was then laid over to next week when it would have been attended to had Kelly lived."

I got to wondering where old Tom had been buried, so went looking first via Find a Grave in the Anamosa penitentiary cemetery, not established until 1914 but including the remains of convicts who died earlier that had been moved from elsewhere. No sign of Tom.

Then I located online an Anamosa penitentiary necrology report that gave his date of death at "age 79" as "Feb. 6, 1900" and gave his place of burial as "Catholic Cemetery." I had forgotten the fact that prison records identify both Tom and Margaret as Catholic.

Iowa by 1900 was providing tombstones for prison inmates who died in custody, so I checked out online listings for Anamosa's Holy Cross Cemetery and found Tom listed as "T. Kelley" (or Kelly), who died Feb. 16, 1900 (the accurate date) at the age of 78.

It's not exactly clear that he has a tombstone, since all of the Holy Cross stones have not been photographed.

But at least now we know where Tom rests, far from his native Ireland, far from the state where he volunteered to serve the Union cause and far from Lucas County, which he left under less than favorable conditions back about this time of year during 1886.