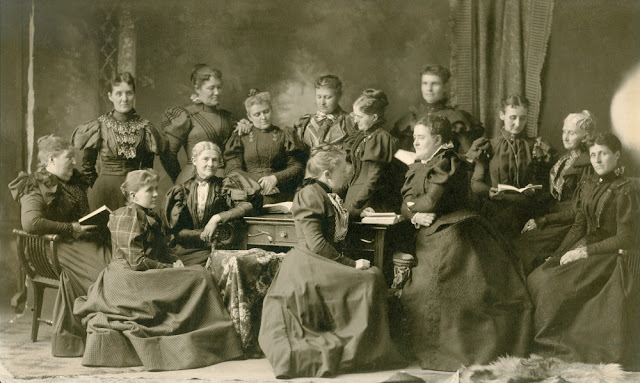 One common misunderstanding about our forbears is that, in the absence of social media and instant communications, they led rather boring lives. Nothing could be farther from the truth; the major difference being that a century or more ago folks were forced to entertain each other face to face.

These august ladies were the Zetamathians, members of Chariton's first federated women's club, photographed during April of 1898.

During the week after Thanksgiving 1897 these women, their spouses and other groups of other Lucas County ladies and gentlemen engaged in a flurry of entertaining, reported upon in The Chariton Herald of Dec. 2, that would have worn today's less sturdy socialites out.

For the Zetamatheans, it had been an annual dinner that marked the sixth anniversary of the organization. Here's the report:

"The most elaborate social event of the week was the annual dinner enjoyed by the Zetamathean History club at the home of Mrs. Anna Dent, on Braden avenue, last Friday evening at 6 o'clock. The fifteen ladies who constitute the membership of the club invited their husbands to participate in the feast of delicacies, and the company, thus augmented, numbered thirty; a very pleasant party indeed. The richly laden table was decorated with smilax and pinks in profusion and a printed menu tied in lavender ribbon, the class color, was given as a souvenir. After supper, the company repaired to the nicely furnished parlors, where they entertained themselves by matching "sliced poetry," and exercising their ingenuity in "guessing contests." This thriving society completed the sixth year of their organization in October, and in that time they have accomplished much in the way of historical research. Today their knowledge of history, ancient, modern and Biblical, is such as can be gained only by years of constant and careful study."

Elsewhere among the social news of the day was a report on a reception held the next day, Saturday, at the grand new turited home on South Main of Mr. and Mrs. Webb Hultz, located on a site that now is a vacant lot. Here's that report:

"That admirable hostess, Mrs. Webb Hultz, entertained a party of friends at her handsomely appointed home on South Main Street last Saturday afternoon. This is the second of a series of 'at homes' that she will give this winter, and those present were glad to be numbered among her friends as her ingenuity in providing entertainment is unexcelled. Blackboard drawings formed the entertainment for this particular afternoon, and because of her skill with the chalk, Miss Tool was awarded the first prize and Mrs. Mallory's drawing, being adjudged poorest, won for her the booby prize. Dinner was served in three courses, and in its completeness culminated the evening's enjoyment."

That Saturday night, the Bates House hotel was the site of a banquet arranged by charter members of the Chariton Volunteer Fire Department, which had been organized 20 years earlier.

"The gallant fire laddies, who met a score of years ago and pledged themselves to turn out at all times of the day or night, in all kinds of weather, to fight the flames from other people's homes and property, had a reunion and banquet at the Bates House last Saturday night," The Herald reported. "Of the seventy-five men who originally constituted the charter membership, only eleven were present. The vicissitudes of time had taken many beyond the borders of Chariton; others had been claimed by death, and the honorable remnant that looked from one to the other across the banquet board, were led to call up from the scenes of the past many pictures that took them back to days gone by.

"One lady accompanied each gentleman and Eli Manning was appointed toastmaster. Supper was brought in, in three courses; and the menu consisted of everything the larder afforded. Oysters, served in three styles, sufficed to appease their hunger to some extent, but when the remaining courses, consisting of meats, fruits and pastries were brought on, they declared themselves fully satisfied. Each member responded to a toast, as proposed by toastmaster Manning. The company were swayed by a variety of emotions, as anecdote succeeded anecdote and each climax was capped and recapped by the succession of gifted story tellers. An organization was effected for the purpose of making this annual banquet a permanent thing. Eli Manning was chosen president and Geo. Ensley secretary.

"The masquerade box supper at the Myers school house Saturday night was a success both financially and socially. The proceeds netted about $10 which will go toward repairing the church. Both sexes were represented and to some of the young men's surprise, who expected to get a fair damsel for partner at supper when unmasked, found her to be one of the coarser sex, so perfectly disguised were they that brothers were thrown together."

Yikes. A bit of drag seems to have been involved here. I wonder if my grandfather Myers and his Gookin and Parsons cousins were involved.

Want to mention, listening to my Grandparents stories and reading all the old correspondence Grandma saved and I inherited, their social life was quite active. And they wrote lots of personal letters to family and friends. It was actually quite necessary before telephones and kept all abreast of illnesses, deaths, births, movement and changes in circumstances.
I just have to mention, to all ladies of year 2017, the above photo of the group of Chariton club ladies, they most all were more than likely wearing a tightly cinched girdle. There is great blessing upon some modern changes!