In time for Christmas 1927: Hooray for the Model A 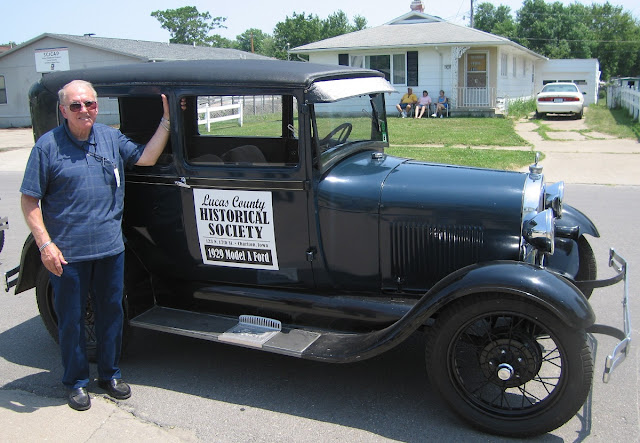 There was considerable excitement in Lucas County (and elsewhere) as Christmas 1927 approached --- Henry Ford finally was ready to introduce the Model A, successor to the venerable Model T. The Model T had premiered in 1908 as America's first widely affordable automobile and had remained in production for nearly 20 years.

The Chariton Herald-Patriot mirrored the anticipation with a front-page story in its edition of Dec. 1 that was introduced by a four-deck headline: "New Ford Ready for the Public - Tomorrow is Day Set for Telling the Public of New Motor Car - Hold Public Reception - The NaLean Motor Co. after Long Wait for Latest Product of Dearborn Plant Now Prepared to Give Details."

In case you've forgotten what a Model A looks like, the photo here is of Jerry Pierschbacher standing next to the Lucas County Historical Society's 1929 model, in line for a recent 4th of July parade. The 1928 model was introduced on Dec. 2, 1927, priced at $500 for your basic Tudor sedan, available in black, gray or green. Not much had changed by 1929.

"Chariton will get its first full description of the new line of Ford automobiles tomorrow," The Herald-Patriot announced in its edition of Thursday, Dec. 1. "A public reception to be held by local dealers is part of the national introduction of the new Ford models .... The doors of the show rooms are to be opened promptly at 8 a.m. and attendants will be on hand throughout the remainder of the day to explain the new and interesting features of the car which is expected to make a new chapter in automotive history."

Mind you, none of the new Model A's actually were going to be present for the open house --- dealers were counting on the just the details (and most likely free food) to attract a crowd. 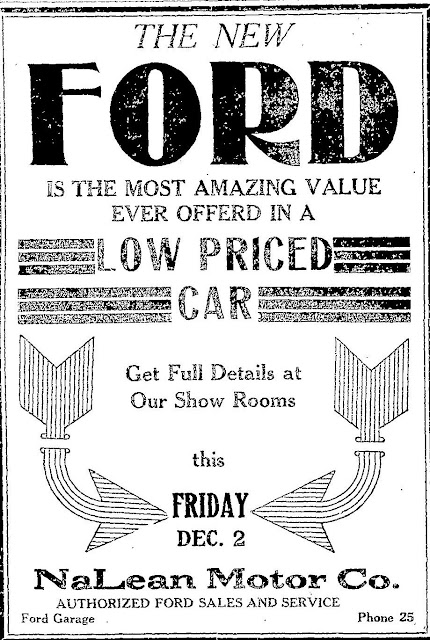 The NaLean Motor Co., Chariton's Ford dealership, had been opened by Lawrence A. NaLean during May of 1927 after he purchased Egan Reese's Reese Motor Co., distributor of Fords since 1917. It was the sixth dealership owned by NaLean, who also had operations in Fort Madison, Albia, Corning, Villisca and Bedford. Although the NaLeans lived in Chariton for a time, they eventually settled in Corning where he was living when overtaken by death in 1939.

Ford dealers were quick to point out during these receptions that introduction of the Model A "will not make the Motel T line obsolete. The manufacture of new parts for Model T replacements will continue to be an important factor of the Ford plants as long as any of the Model T cars are still in operation, the local dealers were advised," The Herald-Patriot reported. "Because of this policy, present owners of Model T Ford cars will be able to keep their cars in perfect order as long as those cars remain in commission."

The first live and in person Model A arrived in Chariton a few days later, on Wednesday, Dec. 7, and the Herald-Patriot was able to report in its edition of Dec. 8 that "Wednesday was a busy day at the NaLean Motor Co., when hundreds of visitors called to satisfy their curiosity as to the details of the new Ford car on exhibition there. The model exhibited was the Tudor sedan and most of those who saw the car expressed surprise at the completeness and nice appearance of the latest product of the Ford Motor Co.

"Perry Barger and Merrit Nolan drove to Centerville Tuesday night to bring the car to Chariton. Barger drove the car here in 45 minutes, he stated. The speedometer on the new Ford registering the distance as 43.3 miles.

"From here the car was taken to Albia last night, where the Monroe county folks will be given a chance to see the new Ford today.

"The local dealer reports the sale of several cars on the day shown here, although deliveries will probably not be made before the first of the year."

The 1929 model at the museum works just fine, by the way --- coddled by board members Pierschbacher and Nash Cox. It no longer goes out at night, however; and spends most of its days in the Swanson Gallery musing about the glories of days gone by.
Posted by Frank D. Myers at 6:28 AM