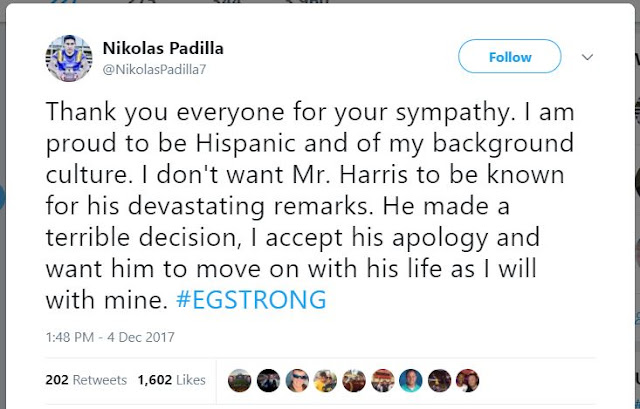 Two back-to-back posts presented themselves on Facebook when I opened it before dawn this morning.

The first, shared by my friend, Tom, among the most professional of Iowa journalists, was this image of a gracious "Tweet" posted by Nikolas Padilla, one of the Eagle Grove High School basketball players dissed on air recently by two Forest City radio station employees during a live game internet video feed because their surnames sounded "foreign."

The second share was this article about that public shaming incident published in The Daily Mail, a British newspaper, posted on "You Might Be From Rock Rapids If ....," a page I subscribe to because of an historic family connection with Lyon County. Orin Harris, 76, one of the public shamers, once lived and worked there. 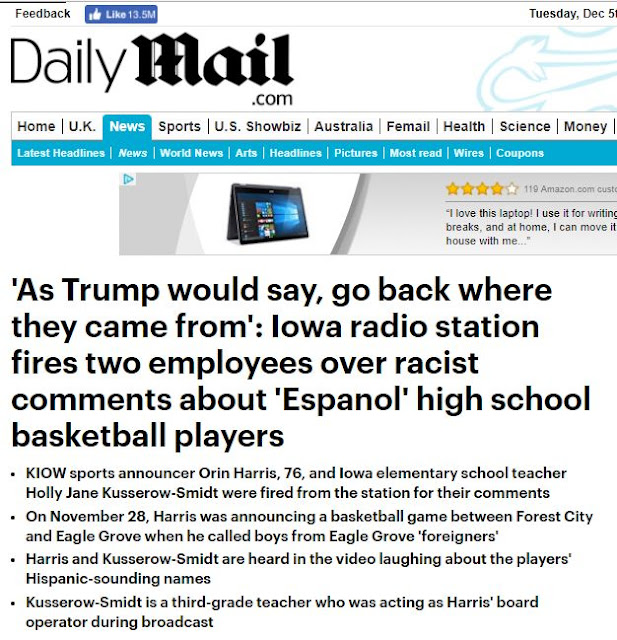 There's a lot to be horrified about here. First, of course, was the fact that two adult media types, one an experienced journalist (Harris) and the other a veteran educator, Holly Jane Kusserow-Smith, would think it OK to make snarky comments about high school athletes because their surnames sounded Hispanic.

Another was how fast and how wide the story spread. When I first saw the video clip on which it was based early yesterday, only a few thousand others had viewed it. When I checked this morning, 308,000 people had --- and the incident had been reported upon worldwide.

In the aftermath, Harris and Kusserow-Smith have been fired from their radio jobs; Kusserow-Smith has been placed on administrative leave from her third-grade teaching job in the Forest City school system; and multiple apologies have been issued, including those by Harris.

The whole business hasn't done much for Iowa's image either and we've already been struggling with comments over the weekend from our senior U.S. senator, Republican Chuck Grassley, who while discussing proposed GOP changes to inheritance tax took leave of his senses and announced, "I think not having the estate tax recognizes the people that are investing... as opposed to those that are just spending every darn penny they have, whether it’s on booze or women or movies.”

But that's kind of a minor point and the fact that the incident has come to light actually is a positive thing. Iowans sometimes start to believe the old "Iowa Nice" cliche, overlooking the fact that for many of us --- when interacting with folks who look different, have "foreign" surnames or in some other way fail to meet white cultural norms --- "nice" is conditional.

For those of us not interested in making fools of ourselves, the incident is a good reminder of established media rules, too often ignored --- if engaged in broadcast journalism and in the presence of a microphone, always assume that it's turned on and govern your mouth accordingly; if engaged in some other form of journalism and in the presence of a keyboard, always assume that whatever you type eventually will be published --- no matter how unlikely that seems.

And finally, we can be darned proud that Nikolas Padilla and his teammates, no matter what their surnames may be, are Iowans.

Here's a link to a Des Moines Register story that contains original video as well as a transcript of what was said.

I graduated from Chariton High School in 1976. I could not find the type of job I wanted in Iowa, so after substitute teaching for a few weeks at CHS, I accepted a job in Upstate New York. I have always had a great love of Iowa and my hometown. However, as someone who has not lived in the state since 1980, I can tell you that the state's politics have gotten stranger and stranger. It started a few years back when Steve King was widely quoted. Then we heard about Joni Earnst's bread wrappers over her shoes (mine went inside he boot as I believe I would have landed on my bottom had the slick wrapper been worn outside), and now Grassley is finally showing his true feelings for the good people of Iowa.

It is a good thing that these sportscasters were fired. Time to get to work and fire some politicians.