The end of the line for Williamson's No. 3 Mine 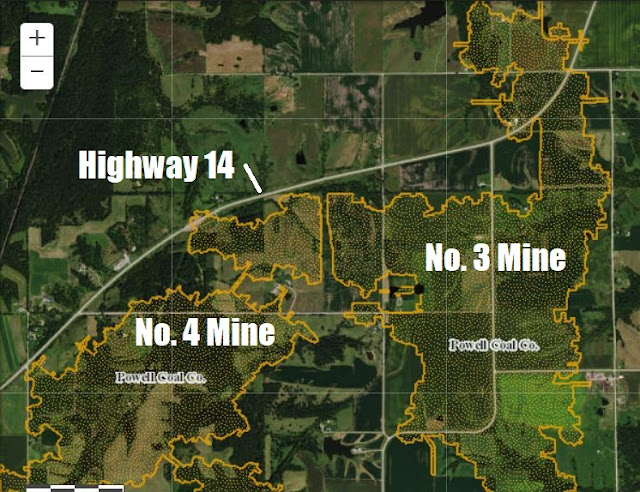 Danny Masters remembered yesterday, after I wrote about the fatal injuries sustained by James Gardiner Sr. during December of 1937 in Williamson's No. 3 coal mine, that his uncle, Ralph "Dude" Chamberlain, 41, also had been fatally injured in that mine --- but two and a half years later, on July 29, 1940. Here's the news story about his death, published in The Herald-Patriot of June 30:

"One man was dead today and another critically injured following an accident at the Rock Island Improvement Co. mine No. 3 yesterday morning about 9:30.

"The dead man is Ralph (Dude) Chamberlain, 41, who died at the Yocom hospital yesterday afternoon about 4 p.m. C.E. Robinson, 55, is now in the Miners' Hospital at Albia where he was reported 'getting along as well as could be expected.' He suffered a broken jaw.

"The two men had been working together setting up a machine down in the mine when a blind slip fell on them. The slate, it was said, knocked Robinson out of the way after breaking his jaw. Chamberlain did not have a chance to escape and suffered severe head injuries.

"After the two men had been brought from the mine, a doctor examined Chamberlain and it was believed at the time that he was dead. He was brought into town, however, where he managed to live until the afternoon.

"Funeral services for Chamberlain will be held tomorrow afternoon at 2:30 at the Methodist church in Chariton. The Rev. Paul Hicks will conduct the services. Burial will be in the Chariton cemetery.

"Chamberlain is survived by his wife and several brothers and sisters. Both Chamberlain and Robinson were Chariton residents."


Two years after Chamberlain's death, the No. 3 mine was sold to the Powell Coal Co. and that for practical purposes marked the end of large-scale coal mining in Lucas County, although smaller-scale mining continued until 1978, when the Big Ben mine closed.

The map, taken from a map-based resource maintained by the Iowa Department of Natural Resources, shows the location of the No. 3 mine just south of Highway 14 northeast of Williamson in Pleasant Township, adjacent to what generally was called the No. 4 mine, which ceased production earlier.

To give you an idea of Mine No. 3's scale, its shaft was 300 feet deep and the mined area covered approximately 790 underground acres. Look today, and you'll not find a trace of it.

Here's the text of the story announcing No. 3's sale from The Herald-Patriot of Sept. 8, 1942. It contains a concise explanation of why Lucas County's coal industry died and why the once-vibrant and diverse town of Williamson has had such a tough time of it as the years have passed.

The headlines read: "Closed by Rock Island: No. 3 Will be Operated by Powell; Last Big Mine Once Employed 400, Produced 2,000 Tons Daily."

"Rock Island Mine No. 3 at Williamson will be closed down as far as railroad production is concerned and will be operated in the future only on a commercial basis by the Powell Coal Co. of Chariton, it was announced today.

"The mine has been working 200 men recently. When in full production it employed 400 men and produced 2,000 tons daily, all for railroad consumption. Powell in purchasing the mine stated: 'It depends on the coal business how many men will be employed and how fast we take out remaining coal. there should be enough coal to last seven or eight years.'

"It is a certainty however that not nearly as many miners will be needed for commercial production. This will mean further depletion of the population of Williamson. Countless families have left the once thriving community in recent years, many to other fields such as the Union Pacific mines at Rock Springs, Wyo., and now more will be forced to leave.

"The mine is the last large mine in the county and probably will be the last big railroad mine of its type ever operated here. Railroads today can buy strip mined coal cheaper than they can produce it themselves and following the war, diesel powered locomotives will undoubtedly be used more and more.

"Opened in the boom years of 1928-29, the mine was known as the finest in Iowa and one of the best in the United States. Expensive equipment was installed, which included cementing of not only the shaft but entries as far as a quarter to a half-mile back. There were electric lights and the mine was at one time one of the few in the country that brought its mules up each night. Barns were built to house them, a double track was put down at Williamson on the main line in addition to the track to the mine. This double track was taken up recently and moved, the material being needed by the road.

"The train for miners was secured for Chariton after a bitter fight with Melcher at the time the mine opened, and as a result many Chariton citizens have always worked at No. 3.

"Jim Hope, mine superintendent for the Rock Island railroad, former superintendent at No. 3 and now in Oklahoma, was in Chariton today settling up affairs for the company and preparing to turn the mine over to the Powell Coal Co., owned by Bert Powell of Chariton."


Bert Powell continued to operate the No. 3 mine on an ever-diminishing scale until 1954, when it closed "for the season" during February, but never reopened.

Two years later, during 1956, the Big Ben Coal Co. began production in the old Tipperary field a mile or two to the east. This was a smaller operation, employing 30 or more miners when operating at full capacity.

When that mine ceased operations during August of 1978, only six miners remained.

My mother Deborah Glassford was married to Rick Henshaw when he died at the Big Ben coal mine, thats some of the reason i was named Ben, and ironically im a very tall person being 6ft6in so my nicname has always been Big Ben.

Thanks for posting this map of Iowa Department of Natural Resources site 59003. Your discussion explains why the Iowa DNR calls this site the Powell Coal Company. Many beautiful plant fossils, now in the paleobotany collection of Harvard University, came from this mine.