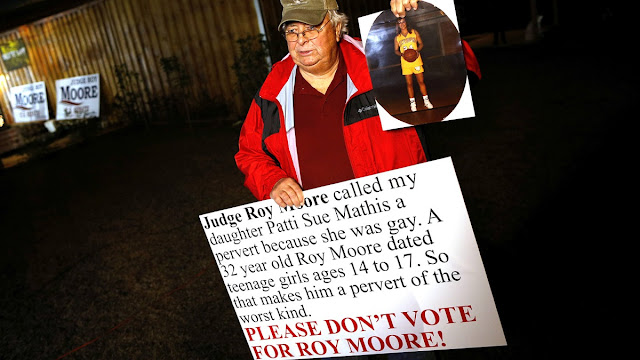 I was all ready to point out, had that election down there in Alabama turned out differently on Tuesday, that Iowans would be standing on a very slippery slope of self-righteousness indeed should we decide to condemn our neighbors to the south.

After all, we return the execrable Steve King regularly to the U.S. House of Representatives; King and Judge Roy Moore are cut from the same raggedy and dirty piece of cloth, stained with racism, xenophobia, homophobia and a bunch of other stuff it's best some days not even to think about.

Fortunately for all of us, Alabama --- led by black voters and women --- defeated Moore (narrowly) and sent Democrat Doug Jones to the U.S. Senate as a replacement for Jeff Sessions, now attorney general in the Trump regime.

The other thought that entered my pretty little head involved the minor role (there aren't that many of us, you know) gay kids --- living and dead --- played in the election.

Senator-elect Jones, for example, has a gay son --- Carson, now a graduate student in the zoo, aquarium and shelter management program at Colorado State University. While Carson didn't play a role in the election proper and generally was left alone by the media, you've got to wonder if his presence in the Jones family played a role in his dad's decision to stand up for what's right and honorable, including justice for everyone.

The role played by Patti Sue Mathis, albeit from the grave, was more obvious. That was her dad, Nathan, now 74, standing in lonely protest outside a Moore rally on election eve not far from his hometown, Wicksburg, Alabama.

Caught on video that went viral, the old farmer's witness against Moore was powerful stuff. And that witness was motivated in part by penance --- Patti Sue's revelation to her parents back in the 1990s that she was gay was not received kindly and some years later, at age 23, she killed herself, although by that time the family had reconciled. Still ....

There's more to that old farmer, by the way, than meets the eye in that video clip. He's a prosperous peanut producer who also operates Mathis Farm Services and the Wicksburg Peanut Co., served four years on the Houston County Commission and 12 years as a Democrat in the Alabama House of Representatives, and recently was named to the Alabama Senior Citizens Hall of Fame for volunteer efforts in his community.

If I were a believer in any conventional sense, I suppose I'd be tempted to argue that the good lord (however you define him or her) sometimes plants gay kids in families in the hope they may lead their straight kinfolk into the light.

That, however, would create a manipulative and unkind creator who is content to purposely cause gay kids to suffer, so I'll have none of it. Although all parents would be advised keep in mind that one or more of their children, grandchildren, etc., might be gay --- and govern their mouths, attitudes and actions accordingly.

Meanwhile, it's interesting to note such occurrences in that great carnival of coincidence we call life.