Death and injury in Williamson's No. 3 Mine 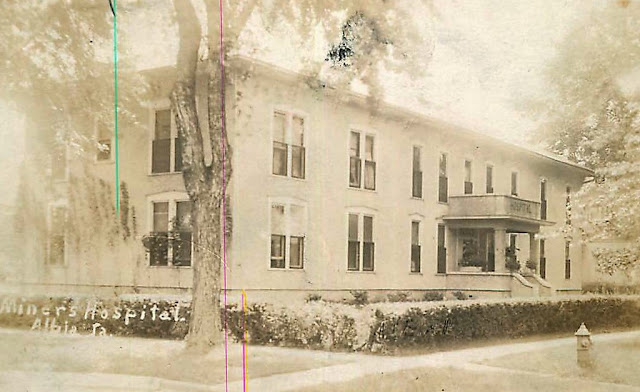 This somewhat battered image, which sold recently on eBay, depicts Miners' Hospital in Albia. Although located in Monroe County, it played a role in Lucas County history, too, because this was where most of our coal miners and their families received advanced medical treatment at minimal cost between its establishment in 1913 and demise during World War II.

It comes to mind because this is where James Gardiner --- one of the last Lucas County miners fatally injured in what had been one of the county's most hazardous professions since the 1880s --- died as a result of those injuries on Dec. 15, 1937, as Christmas approached 80 years ago.

James, born during 1885 in Larkhall, a mining town just southeast of Glasgow, came to the Iowa mining camp of Hocking (in Monroe County) from Scotland during 1911, the year after his marriage to Jane Waddell. During 1920, the Gardiners brought their family to Williamson and during the years that followed became respected members of a community that, at the time, was a very diverse place. They were joined by other family members --- the Scots delegation, including Daniel Gardiner, the Scots lad who married my mother's first-cousin and lifelong friend, Illa (Dachenbach) Gardiner.

James, now 52, and his son, James Jr., were working together late in the day at Mine No. 3 --- northeast of Williamson in Pleasant Township and the last of Lucas County's big mines --- on Dec. 14, 1937, when the accident occurred.

It was reported upon in The Herald-Patriot of Dec. 16 under a banner headline that read, "Jas. Gardner, Williamson Miner, Killed: Buried Under Ton of Slate at No. 3 Mine." The newspaper misspelled his name, omitting the "i" --- but then so did whoever filled out his death certificate the next day.

Here's a bit of the Herald-Patriot report: "James Gardner, 52, veteran Williamson coal miner, was fatally injured Tuesday at the Rock Island Improvement Co. No. 3 mine. He died early Wednesday at Miners' hospital in Albia.

"Pinned to a mine car by a fall of slate, Mr. Gardner suffered severe internal injuries. The accident occurred as he and his son, James Gardner Jr., were winding up work for the day. The elder Gardner was bending over the side of the car when, without warning, about a ton of slate crashed down from the roof.

"His son had removed most of the slate from Mr. Gardner when other workers arrived at the scene, it was reported."

Although taken immediately to the Miners' Hospital, there was little physicians there could do. The weight of the slate had ruptured internal organs, including his liver, and he died early the next morning.

It seems a little odd, today, that he was not taken to Yocom Hospital in Chariton, which was nearer. But it's useful to understand that most coal miners in the South of Iowa at the time were beneficiaries of what actually was a fairly extensive health insurance program.

Miners' Hospital had been established in Albia during 1913 by Dr. Thomas E. Gutch and others. Although privately owned, it was closely affiliated with the United Mine Workers.

Each miner paid a small monthly fee --- initially 25 cents for single miners and 50 cents for family coverage, but that amount increased --- that entitled him to state-of-the-art (at the time) hospital and advanced medical treatment at the Albia facility.

Routine medical issues usually were handled by company physicians --- generally arranged for jointly by mine owners and the union --- or by private practitioners.

But anything serious, ranging from complicated childbirth issues through rattlesnake bites (and yes, Lucas County still had plenty of rattlers back in the early days of the 20th century) to broken bones generally (but not always) required a trip to Albia.

James's remains were brought to Downs Funeral Home in Chariton later on Wednesday and funeral services were held on Friday at the Williamson Community Church. The mine closed for the day so that all of his co-workers and their families could attend.

He was survived by his wife, Jane, and four sons --- James, Alex, Clifford and Albert --- as well as many other relatives and friends. Burial followed in the Chariton Cemetery --- and here, his name is spelled correctly.

James was eulogized as "a man who was highly esteemed among his fellow workmen, and a man who was consistent in his Christian profession, and as many state, he lived what he preached. Mr. Gardiner was born anew on Jan. 16, 1910, in the Christian faith, and for almost 28 years lived to please and to praise the precious Saviour who died to save him."

There are some indications that James was the lay leader of a small non-conformist congregation in Williamson and that he may have preached now and then at the Williamson church, but too little remains of his written record to confirm that.

The slate fall that killed James was not the only accident reported at No. 3 mine that Tuesday, 80 years ago. The reports do not suggest that the two accidents were related, but they may well have been.

Elsewhere on Page 1 of the Herald-Patriot it was reported under the headline "Evans' Ankle Broken in Freakish Mishap" that "Arlington Evans, Chariton miner, was injured in an unusual accident at No 3 mine near Williamson late Tuesday afternoon.

"Evans was in a portion of the mine where a 'squeeze' (a movement of coal in which the top lowers and the bottom raises) was in progress. A chunk of coal popped out from the rib, striking Evans on the leg and breaking his ankle."

In this case, Evans was treated at Yocom Hospital, then taken home to recover.