The first week in December, now past, marked among other things the 140th anniversary of the Chariton Volunteer Fire Department, organized formally on Dec. 5, 1877. As I've written a number of times before, the department was organized in the aftermath of a huge blaze earlier in the fall that destroyed the big brick "South School," built during 1867 on the current site of Columbus School.

Because the city had neither trained firefighters nor firefighting equipment, there was little to do other than evacuate as many contents and possible, then stand back and watch it burn.

In the aftermath, the City Council resolved to purchase both fire engine and hook-and-ladder wagon as well as related equipment. The fire department, consisting of an engine company and a hook-and-ladder company, was organized to operate the equipment.

Council members had boarded a train for Chicago later that fall to examine the equipment used by that big city's fire department and visit with representatives of western agents for various manufacturers. Fortunately for the Lucas Countyans, their visit coincided with a fire in the downtown Field, Leiter & Co. Department Store building that allowed a first-hand view of various brands of equipment in action.

As a result, the councilmen placed an order for an 1875-model Silsby rotary steam engine (Serial No. 578) priced at $3,500 --- a huge amount of money back in the day. Some, back in Chariton, were outraged at the expenditure even though most agreed that something needed to be done.

The hook-and-ladder apparatus also arrived, as The Patriot of Dec. 12 reported: "The hook and ladder truck, with four portable Babcock extinguishers and twenty-four leather buckets, arrived on Tuesday and was taken to the engine room. The company to run this apparatus will now put itself in training."

The Patriot also noted that, "The gentlemen composing the new fire company are taking an active interest in trying to make it a success by drilling and fully acquainting themselves with the duties expected of them. The engine is a beautiful and efficient (and some say expensive) piece of machinery; now let all by acts and words sustain the department and it will eventually become a pride to our young and growing city. The most bitter opponent of the purchase, now that the bargain is closed, will not seek to injure or destroy the efficiency of the department simply to gratify 'I told you so.' The engine is here, the city will have to pay for it, and now let us make it useful."

The new engine was tested on Monday and Tuesday, Dec. 5 and 6. Patriot editor George W. Ragsdale was there.

"The machine is known as the 'crane neck' style," he reported on Dec. 12. "which enables it to be turned in its own length, is nickel plated, weighs about 4,500 pounds, is 8 feet and 10 inches high, 12 feet long without tongue, 5 feet 4 inches wide, wheels of iron with bronze hubs, has a capacity of 425 gallons of water per minute, and throws from one to three streams. The motion is what is known as the rotary, which is continuous and unvarying, and much superior to the rapid and suddenly reversing reciprocating motion. The motion is made by two wheels which by revolving in opposite directions, expel the air and create a vacuum into which the water rushes, and in turn is expelled with great force. We cannot enter into any elaborate description of the engine more than to say that it is a marvel of strength, ingenuity and beauty.

"The first day of the trial the engine was stationed at Palmer's pond," Ragsdale reported (the pond was located northwest of the square), "and in six minutes and forty-five seconds after the fire was started a fifty-foot stream was playing through 100 feet of hose, and fifteen seconds later the stream had extended to over 100 feet in length. Three streams through 100 feet of hose each were thrown at one time at the pond. Hose was then laid to the square and two streams thrown over the courthouse, the highest structure in the city, which demonstrated the wonderful power of the engine by forcing the water 1,500 feet through the hose up a hill some 40 or 50 feet and then into the air more than 100 feet, and at that great height, too, against an adverse wind.

"On Thursday," The Patriot report continues, "the engine was stationed at one of the cisterns on the square, and gave another exhibition of its power. The tests on both days were satisfactory, the machine doing all and even more than Mr. McDowall had promised.

"There were present during the various trials gentlemen from neighboring towns who were well pleased with the work of the Silsby. Since our engine has arrived, the agent informs us that six orders have been received by the company from western towns for engines, which shows the popularity of the Silsby. Mr. McDowall showed us a list of hundreds of towns, many of them smaller than Chariton, where efficient fire departments are maintained, and certainly what other towns can do, Chariton can. The enterprise is now in the hands of live men, and we believe they will make it a success, and that Chariton will in this and other improvements continue to take an advanced position."

Sadly, Old Betsy the First had a rather short life. The firehouse caught fire and burned early on Sunday morning, Sept. 9, 1883, taking the Silsby Steamer and all the rest of the department's equipment --- every bucket, every inch of hose, every hook and every ladder --- with it.

But before two weeks had passed, city councilmen had commissioned new hook-and-ladder equipment and were back in Chicago to negotiate the purchase of a replacement engine. 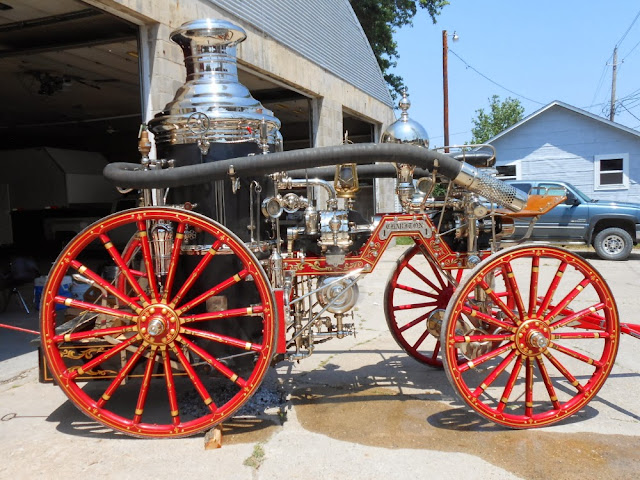