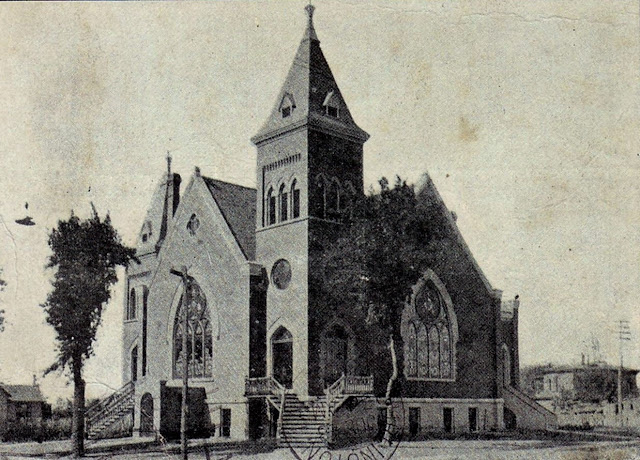 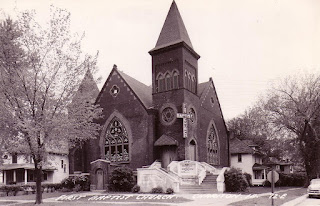 This is the last installment, for the time being, of Chariton First Baptist Church history --- this time, details about the congregation's second building, taken from a report of its dedication published on Aug. 17, 1894, in The Chariton Democrat.

This building was home to the congregation into the 1960s, but was replaced in three stages during that decade. The education wing of the current building was dedicated during March of 1962 after it was built on the site of a large frame house immediately south of the old church that was demolished to make way for it. Once that wing was complete, demolition of the old building commenced. The foyer link then was constructed and, finally, during November of 1969, the new church itself was dedicated.

The old brick church is especially interesting, to me at least, because it was designed by Oran Alonzo Hougland (1859-1912). Hougland, who began his career in Chariton as a carpenter, was the first of two professional architects to practice here (the second was William Lee Perkins) and went on to design many church buildings across the south of Iowa before his premature death of a heart attack during 1912 at the age of 53.

The photograph at the top was taken soon after the new First Baptist was completed during 1894 and the inset image, about 1960. By the latter year, massive masonry steps had replaced the flimsy-looking original steps and the entrance in the southeast turret of the building had been closed.

The August, 1894, dedicatory events lasted all day and some other churches in the city cancelled services so that their pastors and people could attend. I've lifted the following details about the building out of a much longer report:

The handsome new First Baptist church building at the corner of A Avenue and East First Street (now Linden Avenue and South Grand Street) was formally dedicated to the worship of God last Sunday. Work was commenced on this building a year ago last spring and on the 17th of June, 1893, the corner stone was laid. On Sunday evening, Dec. 31, 1893, the first services were held in the new church basement and lasted until midnight when the chimes of the bell were heard tolling the old year out and ringing in the new. At that time the basement only was completed, the work on the main part of the building not being finished until last week. The church and grounds were originally intended to cost $8,000, but the plans grew and expanded until $16,023.12 was used in the erection and finishing and furnishing of the property.

The plan of the building is an admirable one. There is a large galleried auditorium which will seat about 400. The seats are of oak and are arranged in semi-circle form, facing the west. Underneath the gallery is a class room which may be thrown into the auditorium by sliding partitions. Back of the pulpit is an alcove and this constitutes the baptistry. A beautiful painting representing John the Baptist and Jesus coming up from the river Jordan furnishes the background. On each side of the baptistry are dressing rooms, while upstairs is the pastor's study. The basement will be used as a Sunday school room. Two hot air furnaces will heat the building.

The windows are of stained glass. The large one on the north side of the church was presented by the Baptist Young People's Union, the one on the east side by the Maple family and the one on the south side by the Ladies' Aid Society. G.B. Routt and son had charge of the stone and brick work, O.A. Hougland, the carpenter work, and Louis Syberdrop of Creston did the frescoeing which is a marvel of beauty.

I love these pictures and comments ... First Baptist Church was my experience ... Sunday School, youth activities AND wedding (1948). We visited many times during the next years. I am continually grateful to the Pastors and people for teaching, encouragement and friendships through my life time (88 years)! ~ Pauline (Sellers) Askren