Good sermons --- when he happened to be sober 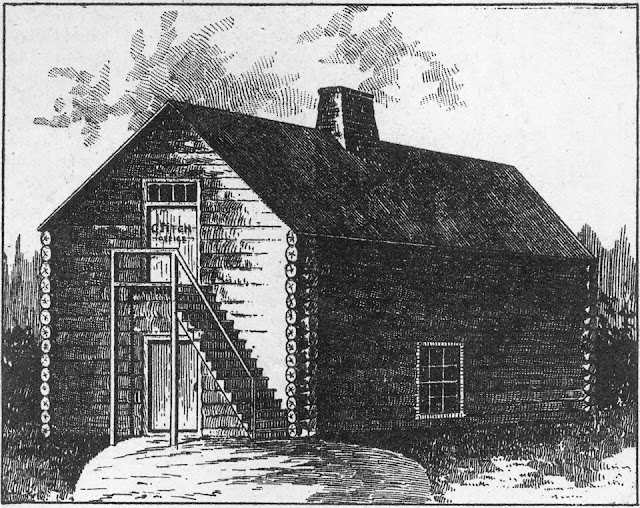 Fires and other disasters have deprived Lucas County of a local newspaper record prior to 1867, when The Chariton Democrat appeared. But sometimes it's possible to find related stories in other state weeklies or dailies, plucked from exchange issues that circulated between 1857, when The Patriot was established, and the advent of The Democrat.

I found his little essay about the county under "state correspondence" in The Davenport Democrat of Feb. 28, 1866, for example. The anonymous author identified himself as "Falcon" and some of the content is derivative --- similar material was published in the statewide Iowa State Gazetteer of 1865. But it's still interesting and proves, if nothing else, that the old log courthouse (above) still was standing just south of the alley on the east side of the square through the Civil War.

I suppose it was intended to be a promotional piece for a sparsely-settled county in the market for more residents, but in some cases "Falcon" was none too complimentary:

Ed. Democrat: Chariton, county seat of Lucas county, has about thirteen hundred inhabitants, has the appearance of an old town, as most of the buildings seem rather ricketty, and not a few are badly in need of repairs. It was first settled in 1848, I believe, and has always been a point of some importance. The old log court house, built in 1850, still stands, and many fond recollections (to the old settlers) cling around it. Here the Rev. Mr. Barker held forth every Sabbath, and conducted many revivals --- here, daily went to school the youth of the village; here were held all the balls and parties, and here too exhibited all the slight of hand performances, magic lantern and other small travelling shows that honored Chariton with a visit. It served also as town hall, and many lawyers here put up their "shingle" --- (Metaphorically, for shingles were scarce in those days).

Many stories are told of Mr. Barker, the preacher --- he was said to be nearly as eccentric as old Peter Cartwright, but more liberal in his views, as he thought dancing no sin, and if the youth and maidens of the village chose to "trip the light fantastic" after meetin' --- which was often the case --- he not only permitted, but encouraged them in it, and many were the dances after, and large was the crowd, that went to Mr. Barker's meetings. He would frequently make appointments in the country, and one was invariably the signal for a gathering of all the racing stock and betting men within a radius of fifty miles.

Chariton now boasts of a good sized brick court house, erected at a cost of $20,000, and a jail. It has two drug stores, six grocery stores, one stove and tin shop, three bakeries, one boarding house, and but one hotel. The Chariton Patriot, the only newspaper, presents a very neat typographical appearance on the inside, and a very poor one on the outer; the secret being that one side is printed in Chicago ---- thereby saving the proprietors at least $300 a year, and giving their readers a better and more infinite variety of news that would otherwise be possible. I commend this plan to the county press generally.

The contract has been awarded, and work has actually commenced on the Burlington & Missouri River Railroad between Ottumwa and this place, and by next December the people expect to hear that sound so dear to Iowa town folks --- the locomotive whistle. Here is a good opening for business men of every description. More stores are needed, another hotel would pay immensely, and every trade would thrive. Surrounded by a rich and well settled country, Chariton is destined to an enviable future. There is not a vacant store or building of any description in the town and it is expected that  a great many new ones will go up in the spring. Those desirous of a good location should make haste, and secure an advantageous site.

I've not been able to track down further information about Preacher Barker --- he seems to have moved on fairly soon.

But here are a couple of other published references to the reverend gentleman, the first from the aforementioned 1865 gazetteer: "Barker was preacher for the new colony and it is said that he got off some very good sermons, when he  happened to be sober, which was seldom the case."

And from the 1875 Andreas Atlas of Iowa: "James Barker officiated as preacher for the new settlement, and it is said he could preach a very good sermon when he happened to be sober."

And finally, from Dan Baker's 1881 Lucas County history: "The latter gentleman (Barker) dispensed the gospel ... while there; but tradition says he did not remain very long, and therefore quite likely sought a more ample field for this theological efforts."