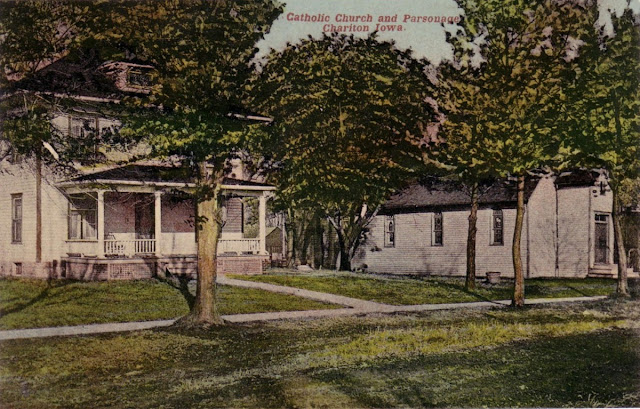 I've been spending a little time during this pre-Christmas season back in the 1870s with Dan Baker, then-editor and publisher of The Chariton Leader. Primarily because he most likely was the most entertaining, although not necessarily the most accomplished, gentleman ever to publish a newspaper here.

Although Dan had the ability to infuriate a substantial percentage of his subscribers at one time or another --- and relished doing it --- he generally had a disarming twinkle in his eye --- and somehow everyone managed to remain friends.

A religious skeptic who finally, in California, settled into the Unitarian fold, Dan looked around Chariton as Christmas 1878 approached and found some things to please him, other things not so much.

The parish of St. Mary's (established in 1869 as a mission of St. Patrick's, Georgetown; now Sacred Heart) had just acquired its first resident priest, the Rev. B.J. Henry. The church, a modest frame structure, was located northwest of the square on Brookdale Avenue, in the neighborhood of what now is the C.B.&Q. Freight House. But there was no rectory, not was there a cemetery.

The postcard view here shows the original church at new location near the intersection Auburn Avenue and North 7th Street where it was moved on skids during 1881. This photo was taken not long before the current Sacred Heart was built in 1914. The rectory itself was new, a replacement for the 1880s version built next to the relocated church.

Anyhow, developing a cemetery, improving the church building and building a rectory required cash. So fund-raising was the principal reason for a festival held on Thursday evening, Dec. 19, 1878, in the second-floor assembly room of the 1858 Lucas County Courthouse. Here is Dan's report, headlined "The Festival."

"The Catholic Festival, in the Court House on Thursday night, was an exceedingly pleasant affair, besides being a splendid financial success. The oysters were good, and all other refreshments of the best. The crowd was large, good natured and happy.

"The most interesting feature of the evening was the balloting for the most popular ladies and gentlemen in the city. A fine, silk hat was the prize for the most popular married man in town, and upon this issue a handsome sum of money was realized. Messrs. John Welch and Bill Reed were the popular candidates, and after considerable animated voting, at 10 cents a vote, John won the prize, and in truth John is as much entitled to it as anyone we know. He certainly has the pleasure of knowing that he owns the costliest silk hat ever sold in the city, as over 50 dollars were paid for it.

"We must not omit to mention the fact that ye editor of The Leader received a vote for being the most popular married man, and much regret that we were not there so that we could have received one more.

"Father Henry, in behalf of his church, returns to the public his warmest thanks for their kind patronage of the festival; also his thanks to the Cornet Band for the fine music they furnished during the evening. The receipts of the evening were over $225."

Christmastide 1877, a year earlier, had been a muddy mess. But when Dan looked outside as the holiday neared during 1878, he found the scene more pleasing:

"The keen air of the past week and the deep snow have convinced everyone that we can have a little winter in this country when we all do our level best for it. There is more snow on the ground now than fell here all last winter. While the steady unchangeable cold, sharp but not severe weather, indicates a beautiful winter season. Sleighing is the best ever we saw in Iowa."

Other aspects of the season, Dan found less pleasing.

There had apparently been some damage to at least one rural school in Lucas County during the course of a religious revival meeting. Remember that by 1878 there still weren't that many rural church buildings scattered around the county; many congregations, actual or aspirational, were using school buildings for their meetings. Dan administered a scolding:

"As steady cold weather with its usual accompaniment, hard times, becomes a fixed fact, the religious revival business in the country starts up with great ardor and enthusiasm," Dan reported "The consequence is that some of the school directors fear that more harm than good results in the violent spiritual ebullitions manifested in some of the school houses, as the broken benches and seats, defaced blackboards, and crumbling plastering bear testimony. Revivalists should remember that tearing around over a school house in a frenzy of excitement, and smashing up seats and furniture like an escaped locomotive, is stronger evidence that a man is possessed of a devel than of a holy spirit."

Meanwhile, in Chariton, Dan had kind words for two congregations; extraordinarily harsh words for another:

"The Episcopal and Methodist churches of Chariton are preparing to have Christmas trees at their respective churches on Christmas Eve. Now why don't our pious Presbyterian friends occasionally get up something in the way of a pleasant surprise for their little fellows and permit them at least once in the year to feel a ray of sunshine through the icy coating of puritanic austerity that envelopes the little rats raised under their frigid teachings. Come, you solemn professors who go through life like dismal funeral processions, inspire a little life into your organization and make the little fellows happy for once in their lives."