The search for a troublesome (and troubled) priest 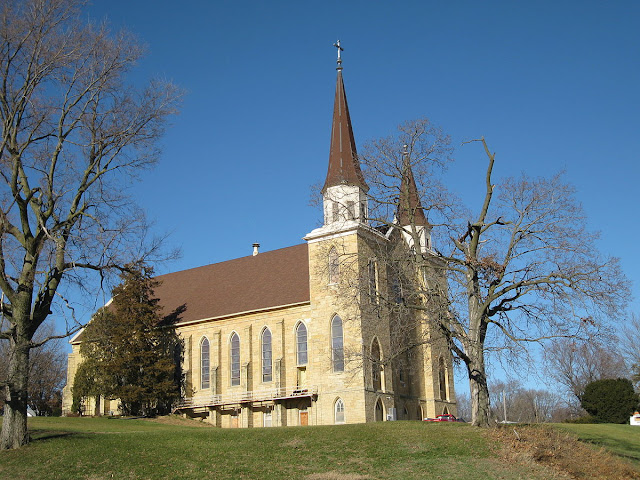 The Rev. Bernard J. Henry, Chariton's first resident Catholic priest, did not intentionally set out to trouble me when he more or less vanished during 1886 in St. Louis. I made the trouble myself after deciding I had to track the poor guy down and see what became of him before I could write about his successor, the Rev. Edmond Hayes, whose life is much more interesting and whose record is clearer.

The photo here of St. Irenaeus Church, Clinton, really has nothing specific to do with Lucas County --- other than the fact Father Henry apparently ended up serving this parish for a time after leaving Lucas County so one of his last known sightings was recorded here. St. Irenaeus, completed during 1871 in what then was the village of Lyons, was decommissioned during 2008, sold during 2010 to the Clinton County Historical Society and now functions as the St. Irenaeus Cultural Center.

Father Henry, recently ordained and given his first assignment by the Diocese of Dubuque, arrived in Lucas County during late August of 1878, as reported in The Chariton Leader of Aug. 31: "Father Henry, the Catholic priest, is stationed at this city and will hold Mass in his church every Sunday morning."

Prior to Father Henry's arrival, Chariton's parish (organized as a mission in 1869 as St. Mary's --- now Sacred Heart --- and served by priests headquartered at St. Patrick's, Georgetown) was part of a mission district that included a substantial chunk of southwest Iowa. By 1878, the responsibility for ministering to the faithful in the region had been reassigned to priests at St. Joseph's Church, Bauer, just north of Newbern and over the north Lucas line in Marion County.

In addition to serving the parishioners of St. Joseph and nearby Rosemount, those busy priests traveled a circuit that included Chariton, the South Irish and North Irish settlements in Decatur County, Mt. Ayr (Ringgold County), the Bohemian Settlement near Bedford (Taylor County), Osceola and Woodburn. Mass had been celebrated in Chariton, at best, twice monthly.

I wasn't able to find anything at all about the Rev. Mr. Henry's background, other than the fact that he had been born about 1847 in Ireland and was a resident of Dubuque when he enrolled at the Franciscan seminary of St. Bonaventure, Allegany, New York. He completed his studies there and was ordained when about 31 by Bishop Stephen V. Ryan, Diocese of Buffalo, during the early summer of 1878. He was assigned to Chariton immediately upon returning to Dubuque.

His arrival meant that Mass now was celebrated weekly at St. Mary's in Chariton, but he also was expected to help out with pastoral duties elsewhere in the district served by St. Joseph priests.

Father Henry apparently did little to attract the attention of Chariton newspaper editors, but The Leader of December 14, 1878, did contain a report that, "The friends of Rev. Father Henry, the pastor of the Catholic church of this city, will regret to hear that he is quite ill with Typhoid fever."

He apparently had recovered sufficiently, however, to be present at the courthouse the following Thursday evening when St. Mary's parish held a public supper and festival there that was declared to have been a considerable success in newspaper editions of Dec. 21.

Some months later, however --- less than a year after his arrival --- Father Henry left Chariton under less than favorable conditions.

The Patriot, in its edition of July 31, 1879, reported that "Father B.J. Henry, Catholic priest of this city, recently became insane from a protracted spell of sickness. A few weeks since, some burglars or tramps attempted to rob him in his room which, it is supposed, accelerated the attack. On Thursday he was taken by his brother to the Catholic hospital at Davenport."

There's no indication that Henry ever returned to Lucas County and a month later, the Rev. Edmond Hayes was sent from Dubuque to fill the vacancy his departure had created.

By the time the 1880 federal census was taken, Father Henry apparently had recovered sufficiently to be assigned as associate at St. Irenaeus. At least he was living when the census-taker called adjacent to the pastor of that parish, the Rev. William Dunn, in the part of the current city of Clinton still known as Lyons.

The last reference to the Rev. Mr. Henry that I was able to find was published in The St. Louis Post-Dispatch of April 21, 1886, under the headline, "A Demented Priest." I have no proof that the subject of the story was our Bernard J. Henry, but it certainly seems to have been. Here's the report:

"After disposing of the case of Capt. Clubb, the jury in the Probate Court last evening heard the evidence in the case of Rev. Bernard Henry, a Catholic priest, formerly of Iowa, and for some time past a patient at the Alexian Hospital in this city. He was examined and afforded ample proof of his unsound mental condition, declaring that he was the successor of Pope Pius IX, a nephew of Queen Victoria and possessed of thousands of gold and silver dollars. After hearing medical testimony, the jury found that the reverend gentleman was insane, and Lorenz Padberg was appointed guardian."

After that, the trail grows cold. Lorenz Padberg was a prosperous St. Louis merchant active in the Catholic community who frequently ended up as a court-appointed trustee or guardian in cases heard by his brother, a judge. So there's no family significance here. And, so far as I could find, no further trace of Chariton's first resident priest.