Slogging through the mud at Christmas, 1877 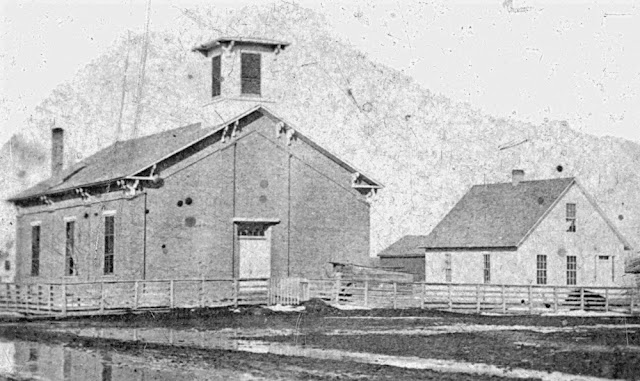 Look at the street as it appeared during the winter of 1869 in front of the Methodist Church and parsonage, then as now located at the intersection of North Main and Roland, and you'll get some idea of the situation as it still existed a few years later, at Christmas 1877.

Dan Baker, editor and publisher of The Chariton Leader, seems to have had a less than satisfactory Christmas back in 1877. Here's how he described it in The Leader of Saturday, Dec. 29:

"Christmas in this city was one of the gloomiest days we ever saw in Iowa. The weather was foggy and misty, and the roads almost bottomless with mud. A few disgusted and disconsolate looking men were seen perambulating the streets, seeking comfort from each other in discussing the weather, while occasionally a troop of neglected boys marched sadly, like a funeral procession, from one business place to another endeavoring to remind the proprietors that Christmas had come. No one seemed inclined to doubt it but the most of them appeared to regret the fact. Upon the whole all felt rejoiced when the day had passed and gone, for it brought us one day nearer spring and better weather."

Dan hated Iowa weather --- and that year's issues had not been snow and cold but rather moderate temperatures, rain, and mud. In fact, he disliked Iowa's weather extremes so much he moved himself and his family to southern California a few years later and stayed there.

Here's how he summed the situation up elsewhere on the page: "We have nothing to say about the weather; we tried to do it justice last week but failed, and this week the English language is simply inadequate to describe the horrible mud, rain, mist, fog, and cheerless gloom that enshrouds creation. We therefore waive the question. We pass."

His lament of the previous week, published on Dec. 22, read as follows:

"The weather. Oh! The weather. Oregon, we apologize to you. We've seen thousands of winters in Iowa, have been here so many years that we've long since forgotten the period in the world's history when we came, but the hills were all holes in the ground, and the rivers were all sparkling little brooklets, the lakes were all little frog ponds, and the present standing highland forests were nothing but dwarfed swamp brush. We've lived 60 years in the mountains, in one winter, and ages on the deserts, and seen every variety of weather, but we never, no never, saw such weather in December as this year. (Dan was 35 at the time and had called Chariton home since 1853.)

"Warm to suffocation, foggy to hide observation, rainy to our detestation, and muddy as creation, yes that's it; persons of a more violent temperament would have differently expressed it. We can endure everything but the mud and that gets us; there is the sticking point. Buggies roll through the streets with nothing but the tops visible, while the teamsters stand on the sidewalk and crack their whips at imaginary phantoms which are supposed to resemble horses making a subterranean journey through town.

"An occasional hat lying in the middle of the road tells the story of many a sad and mysterious disappearance. The loved and lost one gently reposes beneath it, a victim of mistaken confidence in his ability to wade through.

"A quiet gloom has settled upon the face of everyone that indicates a stern determination to weather it through. Still, we apologize to Oregon and declare it from our firm conviction that she has the finest winter climate on earth."

According to The Leader's informal weather observer, the temperature in Chariton the previous Thursday had reached 70 degrees, resulting in "grave danger of fruit buds swelling. Hot weather, bad time for fresh oysters and fruit buds ...."

Still, Christmas was celebrated --- although mud apparently complicated the festivities.

"The Swedes celebrated Christmas on Tuesday evening with a Christmas tree at their church in this city," Dan reported on Dec. 29.

"The Methodist Church had a Christmas tree on Monday evening (Christmas Eve), and everything passed off pleasantly except a slight disturbance at the close of the ceremonies by a young drunken vagabond named Strahan. A fine of ten dollars imposed by the mayor next morning paid for his share of the fun."

And "The boys and girls indulged in a little dance at Mallory's Hall on Christmas night" --- despite the mud.