Tipperary: A town that died with its boots on 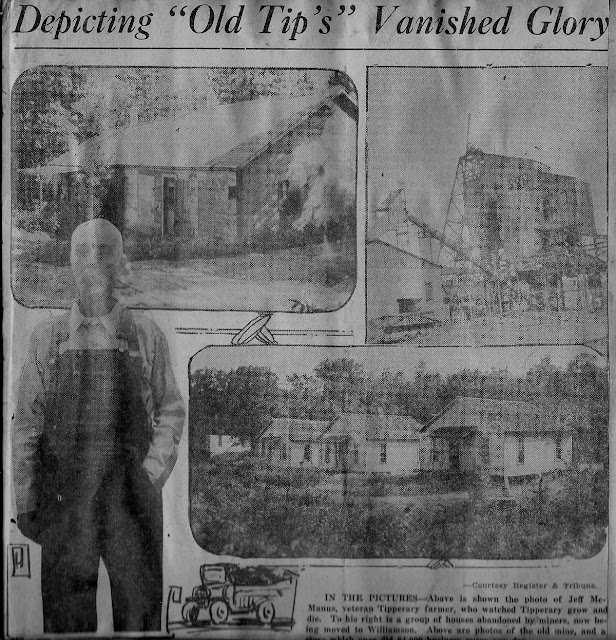 This evocative memoir of Lucas County's legendary Tipperary --- the mining town that sprang up deep in the hills of Pleasant Township in 1914 and flourished until the spring of 1927 --- was written some time during late 1927 or early 1928 by a reporter from The Knoxville Journal. Whoever he was, he certainly outclassed Chariton newspapermen of the day by recognizing a good story when he saw one. Nothing similar was produced in Lucas County's capital city.

The original printed version may survive in bound volumes of The Journal or on microfilm, but the copy I've transcribed this morning was clipped and pasted into a scrapbook not long after publication. The scrapbook has not survived, but Helen (Baxter) Smith pulled the Tipperary page out during 1967 and donated it to the Lucas County Historical Society where it remains.

The illustration is not the best, but I've used it because it contains not only a photo of Jeff McMannis, who tells a little of Tipperary's story here, but also rare snapshots of a few of the old Tipperary buildings. I've placed a photograph of the Tipperary mine tipple, taken about 1917, also from the historical society collection, at the end of the post.

The Tipperary mine (Central Iowa Fuel Co. No. 2) opened during the spring of 1914 and developed into Lucas County's largest and richest. The Olmitz mine (Central Iowa Fuel Co. No. 3), located to the southwest, was smaller and less productive. But many of the miners who lived in Tipperary's sister village, Olmitz, worked in the Tipperary mine and both lively little towns flourished during the same time period.

Jeff McMannis becomes reminiscent and tells the Knoxville Journal something of the history of Tipperary: Its rise, decline and fall; and now it is farther away than ever before because it has been relegated to history and will soon be dropped into oblivion with the other lost municipalities of Lucas county. During the past decade there have been many comings and goings to Tipperary, and certainly it was a quaint place, located as it was between the scenic hills of Pleasant township, and has been noted for many things. By morning light it looked like a castled city upon the River Rhine, but when the full light of day fell upon it, much of its romance went up with the sunshine. Day after day, year in and year out, there was a regular hoist of black diamonds and much of wealth was left in the pit, never to be lifted to the surface, owing to the long shutdown, caused by the wage disagreement --- and that is loss. The habitations are to be torn down and moved elsewhere, and the equipment is to be utilized at some other center of industry. Tip has gone the trip of all other ill-fated towns.

That, briefly constitutes the obituary and history of Tipperary --- "Old Tip," as it was familiarly known --- one of the best mining camps ever established in Iowa, as told by Jeff McMannis, 75 year old farmer, "who was there when they came and is still there when they're going."

Nestled in a valley, in the northeast corner of Lucas county, and made almost inaccessible by surrounding hills, "Old Tip" lived and died with its boots on. Partly because of the wildness of the country, and partly because of the rougher element's playfulness, Tipperary acquired a reputation that rivaled western gold mining camps of fifty years ago.

With his house on the highest hill, Jeff McMannis could sit on his front porch and survey Tipperary in the valley below. He watched it grow from a wilderness to a hustling mining town. He saw the tall tipple reared into the air over the mine; the shacks and houses spring up as if by magic. He saw stores, pool halls, gambling dens open as the result of the unparalleled prosperity which Tipperary enjoyed.

And now he is watching nature slowly obliterate the works of man. He sees weeds and underbrush slowly blotting out the vestiges of what was once a rip-roarin' good town. For "Old Tip," live as she once was, is a dead one now.

The recent decision of the coal company to move many of the houses from Tipperary to a new mine at Williamson, and the removal of two boilers from the mine, practically spells the doom of the town. A little more than a hundred people still remain there, partly because it is a cheap place to live, and partly because they are hoping against their better judgement that the mine will re-open.

"Tipperary wasn't nearly so bad as the stories which were told about it," he continued. "Of course the rougher element did give it a bad name, but I'll say that  I never knew what "Hunk" or "wop" meant until they started the mine here. And I found them to be mighty fine, industrious folks. There were a few exceptions like there are in any town, but any time those folks want to come back to Tipperary, they'll find me heading the welcoming committee."

Here the daughter, Lyda, who taught school in the community for ten years, interposed with a story of the miners' generosity. "At one time," she said, "we had a school benefit and we took in more than $100. I used to teach at Olmitz, a camp south of here, and every night I walked up the tracks home. I passed hundreds of miners every evening, and never once did they cause me the slightest embarrassment."

Lady Luck was the miners' biggest weakness, according to Mr. McMannis. "They liked to gamble too well," said the old man with righteous indignation. "It used to make me boil to see the gamblers get their money. But they lived well, too, always having the best of everything for their tables, the best clothes and many of them had fine cars. My daughter used to clerk in a store down there that did $1,000 business every pay day."

If you ask others who still remain, they'll tell you that Tipperary was pretty wild. There were numerous cutting and shooting scrapes, and one shooting resulted fatally. The big trouble was the freedom of liquor use, they say. But one thing they do pride themselves with was that Tipperary never had a robbery.

Miners will tell you that when the mine was bringing out 1,000 tons of coal every day, Tipperary was the best paying mine, both for the owners and miners, that was ever sunk in the state.

"I can remember," said McMannus, "when pay Saturday came and the men wanted to go to town, they would pay good sums to get their big cars over that big hill north of town if the roads happened to be muddy." (Farmers would haul vehicles up the hill with teams of horses.)

A dust explosion in February, 1927, really spelled the doom of Tipperary, many believe. When the wage disagreement came in April, 1927, the mine closed and has never been reopened and underground workings are flooded, miners believe, and they also say it would be an impossibility to start work using the present shaft.

But they are secure in the belief that some time a new and greater Tipperary will rise from the ruins of the old, for as Jeff McMannis said, "There's millions of tons of coal under this ground and some day someone is going to need it."

So far, a new and greater Tipperary has not arisen from the ashes of the old --- and it seems unlikely that it will. The coal still is there, but very deep and of a quality that is out of favor. With permission, you can still drive up the little valley where Tipperary once was, but few traces remain.

In addition to the 1927 dust explosion and the wage dispute that closed most large mines in southern Iowa later that year, the fact that coal bed around the Tipperary shaft had been mined out also was operating against it. Had the Tipperary field been reopened, a new shaft would have been required and the Central Iowa Fuel Co. had just opened Mine No. 4 northeast of Williamson and preferred to focus its interests there. So Williamson sprang to life as Tipperary and Olmitz died.

Jeff McMannis, formally Alonzo Jefferson McMannis, died on Nov. 28, 1928, his 76th birthday, exactly 89 years ago today. He's buried with his family in Zion Cemetery, just up a long-closed and abandoned road that once connected it to Tipperary with a glorious view to the southwest toward the site of old Olmitz.

My father's family lived in Olmitz and my grandfather Kinshaw worked in the mines. The house I lived in in Williamsson until I was five had been moved from Olmiitz. I remember my dad talking about Tipperary.