Hannah Arendt and the "banality of evil" 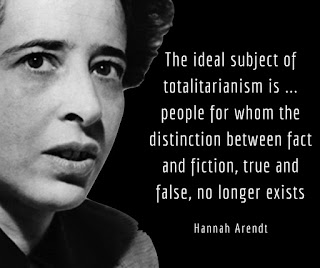 The New York Times stirred up a little controversy over the weekend by publishing a report headlined "A Voice of Hate in America's Heartland." It focused attention on a nondescript young couple from New Carlisle, Ohio --- Tony and Maria Hovater --- distinguished only because of his active role in American white nationalism. The piece caught my eye, in part, because a friend of mine --- among those least likely to sympathize in any way with Hovater or his causes --- recently moved to Chariton from New Carlisle. And also because some of my forbears lived there for a time before heading west into Iowa during the 1850s.

Much of the criticism of The Times piece involved allegations that it focused too much attention on the banality of the young Ohio couple --- your typical friendly neo-Nazis next door --- and too little on the evils of the causes they espouse.

All of which has caused me to scurry around the cyber-universe this morning, reading up on Hannah Arendt (1906-1975), who coined the phrase "banality of evil" as part of the title of her 1963 book, "Eichmann in Jerusalem: A Report on the Banality of Evil."

Arendt, who had barely escaped Nazi Germany with her life, was commissioned by The New Yorker magazine in 1962 to cover the trial in Jerusalem of Adolph Eichmann, a principal architect of the Holocaust. Her reports appeared in The New Yorker, then were augmented for publication as a book.

The quote used here for illustrative purposes is from another of her works, "The Origins of Totalitarianism."

One of the better discussions of Arendt's ideas (shared by many other thinkers) appears in a post from earlier this year by Maria Popova on her blog, "Brain Pickings." I'd recommend it to you. It's entitled, "The Banality of Evil: Hannah Arendt on the Normalization of Human Wickedness and Our Only Effective Antidote to It."