Keeping Otterbein Church on its feet ... 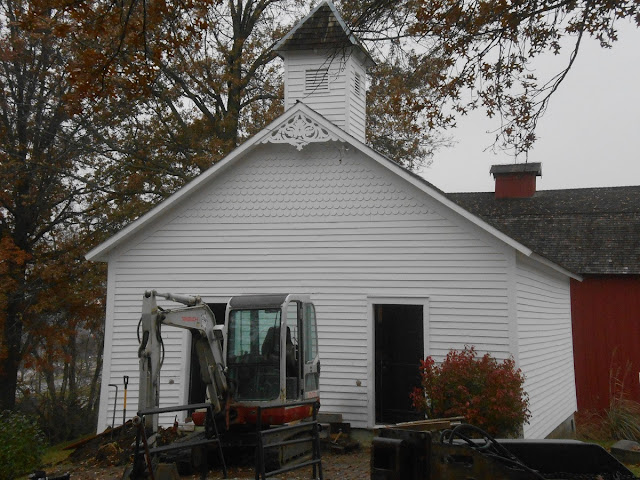 The natural inclination of any old building is to fall apart and when that starts to happen, the best defense is a strong offense. Which is why G.M. Builders & Son were digging, replacing timber, crawling around under, pushing, jacking up, bolting and in general doing what was needed Friday to keep Otterbein Church on its feet.

Otterbein is one of seven buildings on the Lucas County Historical Society museum campus and we'd been noticing for a couple of years that the center section of the facade, between the two doors, was starting to bow outward, it was becoming increasingly difficult to open and close the doors and a distinct crack was opening between wall and floor.

Temporary fixes kept the building operational during the open season, but once fall began to turn toward winter and tours were infrequent, it seemed like a good idea to see what was going on --- and fix it.

Otterbein was donated by its congregation, moved to the museum campus, restored and  partially rebuilt by the Lucas County Bicentennial Commission during 1975-76. This incarnation of Otterbein actually was built in the 1940s with materials in large part salvaged from the original 1889 church building, which had fallen into disrepair. Church contents in large part were moved from the original building.

While under restoration, it was decided to make the facade look more like that of the original building. So a foyer was removed, a second front door added to the south, fish-scale shingles and fretwork added to the gable and a cupola with bell placed on the roof.

Alterations to the framing made when the front was rebuilt seem to have been responsible for the fact the center section of the front was no longer secured to the rest of the building as it should have been and was beginning to move out and downward.

The sag now has been corrected, the wall pushed back into place and everything bolted together. That's Andy at work here; Willie was under the building. 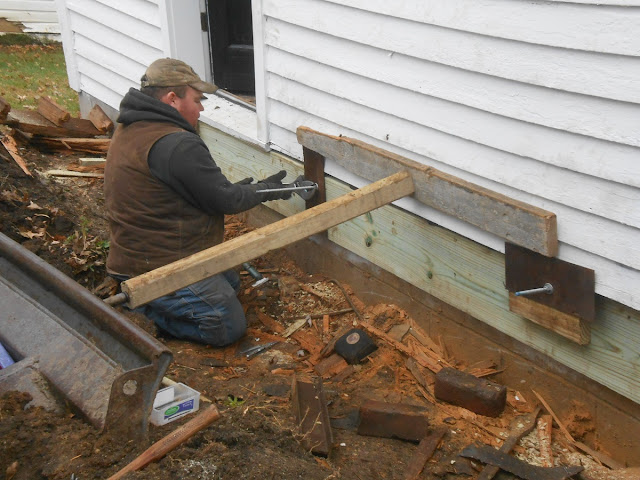 The wooden ramps leading to the two doors, starting to deteriorate after 40 years, have been removed.

In the spring G.M. & Son will be back to install new concrete ramps. We also plan to have the brick platform in front of the church and the brick sidewalk that leads down to Puckerbrush School from it replaced with concrete at that time. This part of the project will be funded in part by a gift from the Coons Foundation. Last year, part of that gift was used to pave the parking area adjacent to the Lewis Building in order to improve handicap accessibility.

These brick areas, constructed from vintage pavers, were atmospheric --- but hazardous to our guests who have difficulty walking. We'll reuse the pavers elsewhere on campus, but not in high traffic areas.