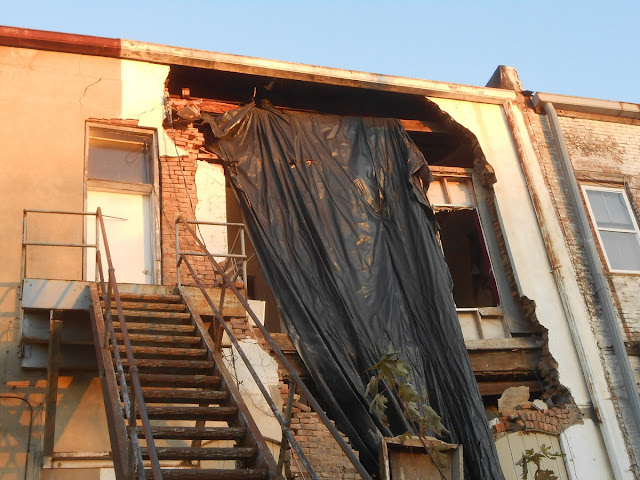 Chariton received some very good news on Wednesday involving a derelict building on the west side of the square --- a $75,000 Main Street Iowa Challenge grant that, with local matches, will fund rehabilitation.

The rear wall of the building --- south half of a double-front structure built in 1883 as the Exchange Block --- collapsed a couple of years ago. Although the balance of the building is sound, the alley side has been hanging open while ownership and financial responsibility cases made their way very slowly through district court.

The grant, which goes to Chariton Area Chamber/Main Street, will be matched by the city of Chariton and financial commitments made by the owners of the buildings that flank the wounded structure. Total investment in the rescue phase of the project is estimated at $155,000. Without the grant, most likely the city would have ended up bearing the entire cost of either repairing the building or demolishing it and shoring up the structures on either side. The previous owner lacked funds to do either.


The project will involve rebuilding the rear wall of the building, providing access to its second level via a rear stairway and balcony that will serve both halves of the Exchange Block (divided on that level by a wide central hall) and necessary repairs to the roof and other elements of the building. The long-term goal of rehabilitation is to create a "white box" commercial space on the first floor and return the second floor to use as upper level housing.

It is believed that failure to deal with roof-drainage issues allowed water to penetrate the brick rear wall of the building, dissolve mortar and result in the collapse.

The grant was one of 14 awards by the Iowa Economic Development Authority (IEDA) totaling $933,300 announced at the Greater Des Moines Botanical Garden on Wednesday. All will help fund comparable projects --- façade upgrades and restoration, upper floor rehabilitation, building stabilization and repairs and remodeled spaces for expanding downtown businesses.

“The Main Street Iowa Challenge grants have proven to be catalysts for the revitalization of Iowa’s historic main streets,” said IEDA Director Debi Durham. “These projects demonstrate the ongoing financial commitment the people of our state – both our elected officials and private citizens – have made to the revitalization of our historic downtown districts. Rehabilitated downtown buildings create opportunities for new business and new residences in the core of our communities.”

The grants are administered through IEDA’s Iowa Downtown Resource Center and Main Street Iowa programs. The estimated total project cost of the 14 bricks and mortar projects is over $2.7 million. Chariton was eligible for the grant only because it is a Main Street Iowa community.

The Challenge Grant program is funded through an appropriation from the Iowa Legislature. Since the first appropriation in 2002 through 2016, approximately $6.8 million in state and federal funds have leveraged over $45 million of private reinvestment. Over the life of the program, 138 projects in 49 Main Street Iowa commercial districts across the state have received funding.

A majority of the grants announced Wednesday were for $75,000. The other recipients were Des Moines, Ames, Burlington, Grundy Center, Jefferson, LeMars, Manning, Marion, Mount Vernon, Oskaloosa, Ottumwa, Washington and Woodbine.

Thanks, Frank, for keeping us informed. It is good to see progress on this location. The damage looks like it would eventually affect the surrounding buildings as well.