Dobson & the resurrection of Casavant Opus 3105 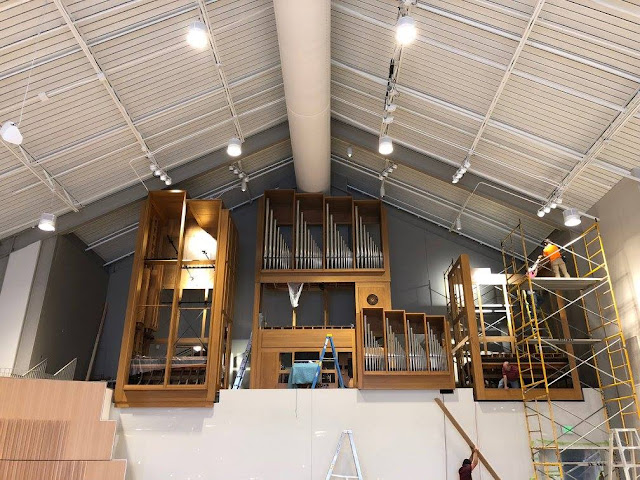 I'm a big fan of Dobson Pipe Organ Builders of Lake City, an Iowa treasure that too many folks are unaware of. And I've been following with special interest lately Dobson's part in the resurrection of Opus 3105, the mighty Casavant Freres pipe organ that once presided over Clapp Recital Hall on the old University of Iowa arts campus, down along (and fatally close to) the Iowa River.

Dobson builds some of the most acclaimed pipe organs in the United States, but also rescues, revives, repairs, reconditions and in some cases relocates older instruments by other builders for a variety of clients across the country.

Opus 3105 --- a 56-stop tracker instrument with 3,758 pipes --- was built in Quebec during 1971 by Casavant Freres and installed in the gallery of the new Clapp Recital Hall during 1972. More than 30 years later, in 2008, flood waters devastated the University of Iowa arts campus, including Clapp, and the decision was made to relocate its components for the most part on higher ground and demolish the damaged and flood-prone buildings.

The pipe organ, because of its gallery location, was not damaged by flood waters. But the question arose of what exactly to do with it.

Along came Iowa City's St. Andrew Presbyterian Church, planning a new church and in the market for a suitable musical instrument. The congregation decided to give the magnificent organ a new home and incorporated it into the design of a new sanctuary where its location is similar to the gallery setting it formerly enjoyed at Clapp. 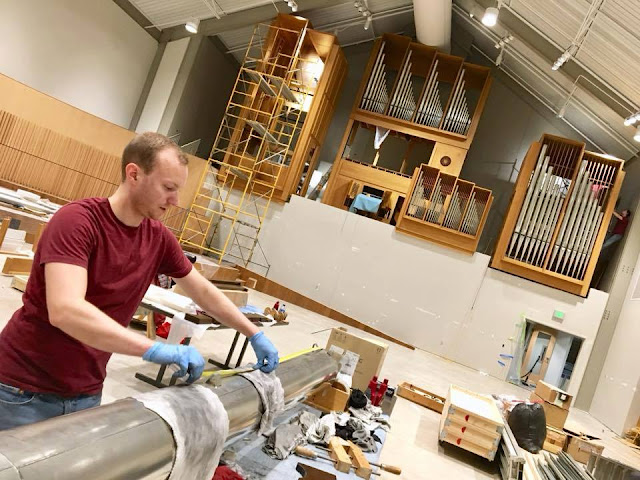 Dobson was employed to disassemble the instrument (aided by volunteers from St. Andrew Church and elsewhere), handle minor reconditioning and for several weeks now company workers have been re-installing it in the new St. Andrew.

The St. Andrew congregation is scheduled to occupy its new quarters in early December and the Casavant should be ready by then. I've borrowed a couple of photos here from the Dobson Facebook page to show how the instrument looked as it was being reassembled. The video below, produced by St. Andrew Church in 2014, tells more of the instrument's history.

Casavant and I go back a long way in Iowa, sort of. I was a sophomore at the University of Iowa when the the state's first Casavant, Opus 2830, a smaller 22-stop instrument with some 1,630 pipes, was installed at Gloria Dei Lutheran Church. I am in no sense a theological purist, so divided my Sunday morning time, at the time, between that wonderful new instrument and the more traditional pipes at First Methodist (First Methodist had --- and still has --- better stained glass, another consideration).

I arrived back in Iowa City after a tour of Vietnam in time to watch the new music campus arise along the Iowa River, but finished my graduate degree before the Clapp Casavant sounded for the first time.

Now, some 50 years later and firmly in the Episcopalian fold, I'm delighted to report that the Cathedral Church of St. Paul in Des Moines is home to one of the Midwest's finest Casavants, a joy to experience.