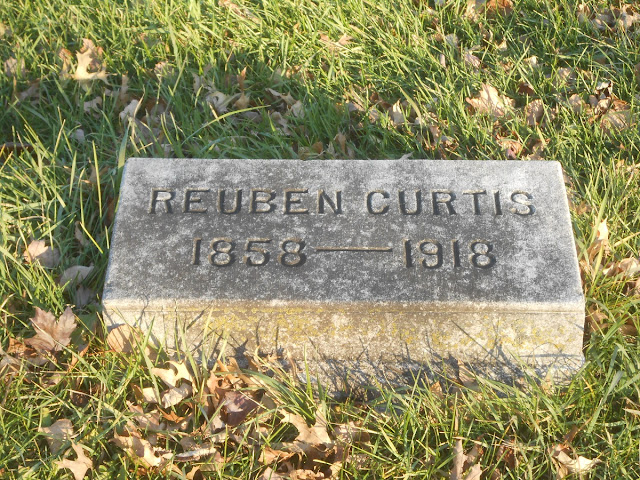 Some days, when I'm short of anything to write about, I go out to the cemetery, walk around for a while and wait for someone to yell at me --- with a story to tell. Not literally, of course. But there are a lot of good stories out there just waiting.

Saturday's was too beautiful an afternoon to work, so I picked out five likely candidates on a late afternoon stroll, photographed their tombstones, then came home to find out a little more about the folks behind them. Two were worthy people, but not especially interesting; one may merit further investigation; a fourth marked the grave of a young man who died many years ago now and far from home of AIDS and that made me sad. The fifth, Reuben Curtis, was ready to talk.

I don't know that much about Reuben's background, but do know that one of the dates on his tombstone --- apparently erected some years after his death --- is wrong. The birth year, 1858, probably is correct (or close to it), but he actually died on July 18, 1914, rather than during 1918.

Reuben was born in Ohio and first appears in Lucas County census records during 1895 when, as a black man who identified himself as age 36 and a widower, he was working as a farm hand for Thomas Hughes near Chariton. Thomas, at age 61, was some years his senior and also a widower. Reuben, who gave his birth date as January 1857, still was in the employ of Hughes when the 1900 census was taken.

Soon after 1900, however, Reuben went to work as a delivery drayman for the G.J. Stewart Lumber & Grain Co. and continued in that job until his death.

It may be that Reuben came to Lucas County in the first place to work in the mines at old Cleveland, since he married a miner's daughter during 1902, but those mines were failing by the 1890s and many miners, both black and white, had to find work elsewhere.

On Sept. 2, 1902, Reuben was married to Elizabeth Peak (or Peake) in Chariton by the Rev. Press Erwin, pastor of the African Methodist Episcopal Church, and they settled down to make a home on West Linden Avenue, where many black families lived.

Elizabeth, born in Wales, was among the many children of Henry and Jane Jones who had for sure settled in Cleveland to work in the nearby mines prior to 1890. At age 17, she had married J.M. Peak on Oct. 26, 1890, at Chariton; it's not clear what became of her first husband; there may or may not have been at least one child by that marriage.

If this racially mixed marriage caused consternation among Elizabeth's family, it does not seem to have hindered congenial relations. There are many reports in Chariton newspapers during the first years of the 20th century of visits back and forth between Elizabeth and her relations in Osceola, Mystic, Des Moines and elsewhere.

Reuben and Elizabeth became the parents of a daughter, Anna, born about 1895, and there is no reason to believe that theirs was not a happy marriage.

But on July 18, 1914 --- a Saturday --- Reuben came home after a full day of work at the lumber yard, worked for a time in his garden along Linden Avenue, then died of a heart attack. Funeral services were held the next day and he was buried in the most westerly section of the Chariton Cemetery, just south of where the remains of Chariton's most prominent citizen, Smith H. Mallory, had been interred a few years earlier, during 1903.

Chariton's black community may not have had an especially easy time of it back in the "good old days," but segregation has never been practiced in our city of the dead.

Reuben was an active member and officer of the Chariton lodge and traveled frequently as an ambassador to participate in lodge activities in Lucas, Albia, Osceola and elsewhere.

Although membership in Chariton's Odd Fellows lodges was segregated, the two organizations seem to have enjoyed congenial relations and shared use of the I.O.O.F. meeting rooms, where during late December of 1901, a fund-raising "possum supper" was held. Here's the report about that event from The Chariton Herald of Jan. 2, 1902, under the headline, "Possum Supper."

The Grand United Order of Odd Fellows entertained their friends at a genuinely southern possum supper with all the finishings, such as roast pork, chicken, stewed oysters, rolls, celery, pickles, ice cream, cake and coffee. This feast was given in the I.O.O.F. hall Saturday evening, and about $20 was realized. Messrs. Jones, Johnson, Kirk and Good, a quartette of Nashville students who were in the city with Ruscoe & Holland's "Uncle Tom's Cabin," were present and gave the audience a few vocal selections which were highly entertaining. Mr. Johnson further added to the interest of the evening by a brief and spicy address. This gentleman is a G.U.O.O.F., his home being Indianapolis. The welcome address was given by Reuben Curtis, and others who gave brief talks were Messrs. Mosely, of Cleveland No. 4, and Ousley, of Lucas. The supper was prepared and served by members of the order, and all who were fortunate in getting a taste of "possum" pronounced it "good."

The use of quote marks around "possum" raises the question of whether or not that critter actually was on the menu, or if the title of the event was a promotional gimmick. Whatever the case may have been, I'd have opted for the roast pork, thank you very much.

Following Reuben's death during 1914, Elizabeth continued to live in Chariton where she married as her third husband Hiram Tull and continued to live on Linden Avenue until her death on June 12, 1947, at the age of 73. She was buried near her parents and Reuben in the Chariton Cemetery and Hiram, some 10 years her junior, joined her there during 1958.

Elizabeth's survivors during 1947 included a daughter, Marie Gandee, of Los Angeles. This apparently was a daughter by her first marriage, who may have been raised in part at least by relatives in Appanoose County.

Karen Cowles Kester, who did a little additional sleuthing, discovered that Anna, identified as "mulatto" in the 1910 census and who apparently identified as black in later life, married Horace C. Crawford. They lived at Galesburg, Illinois, where Anna died on May 31, 1938, at the age of 34. She is buried there in East Linwood Cemetery.