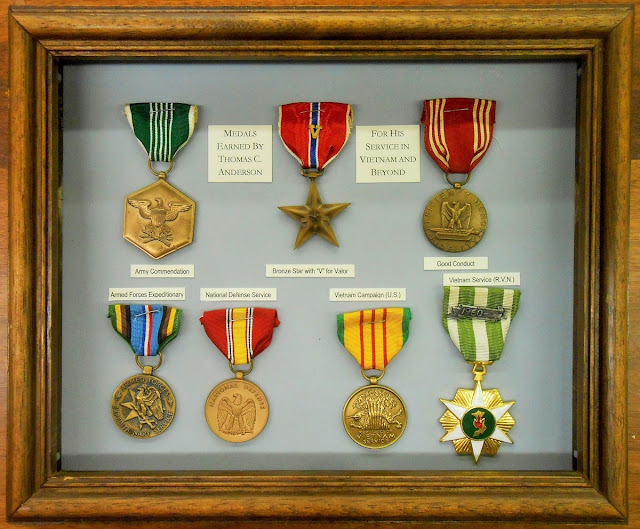 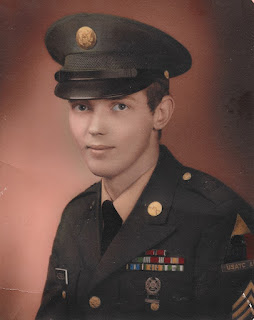 I've been cataloging for the last couple of weeks items that came to the historical society during the summer now past from the family of Tom Anderson, who died during March at the age of 68.

Tom was a long-time friend of the society who over the years had donated items from his collection of carpentry tools, his U.S. Army Class A greens with ribbons, patches and badges attached and more.

He had asked that, after his death, the society be given the pick of his tool collection and we chose 25 items, mostly carpentry planes now on display in the Bill Marner Blacksmith Shop. The shadow box in which he had displayed the medals that matched the ribbons on his uniform as well as a formal Army portrait came along a little later.

I decided to label the medals --- and looking at them this morning see that I've messed up. The medal in the lower right corner is the Vietnam Campaign Medal issued by the Republic of Vietnam; the ribbon next to it, the U.S. Vietnam Service Medal. I'll get that corrected next week.

Tom came to mind last evening while I was watching Episode 5 of the Burns-Novick film, The Vietnam War --- a tough one to sit through because it covers the period July-December 1967 and, graphically, the deadly fighting engaged in by U.S. Marines and U.S. Army units south of the DMZ and in the Central Highlands.

Tom wasn't there then, but 1967 was the year he graduated from Chariton High School (this weekend was the 50th anniversary homecoming for his classmates; I hope they remembered him) and then, age 18, enlisted in the U.S. Army.

We squeezed a small battered earlier photo out of Tom to accompany his uniform a few years ago and in it, he looks impossibly young. This portrait most likely was taken about 1971-2 after a tour of duty in Vietnam and while he was assigned to USATC Armor at Fort Knox, Kentucky. Still impossibly young. I can't be sure, but it looks as if he may already have had his staff sergeant stripes. He served until 1975.

I wish I knew more about the stories behind the most consequential of these medals, especially the Bronze Star Medal with "V" device, awarded for heroism in combat. I think it was awarded during April of 1970 while he was serving with Company A, 2nd Battalion, 34th Armor, in Vietnam. But can't be sure. Perhaps one day we'll track the story down. If I'd had my wits about me, I'd have looked carefully at his decorations when the uniform was brought in and Tom was very much alive --- and asked.

This does bring to mind the importance of veteran stories, even though for various reasons veterans sometimes are reluctant to share them.

If you are related to a veteran who earned medals for heroism or, for that matter, for meritorious service otherwise, some day you'll want to know the stories behind them. So ask. Then write the stories down. If you're a veteran, share your stories or write them down yourself. Please!

Thank you for remembering my brother, Tom. Teresa Anderson

Tom was remembered at our reunion along with 20 other friends who have left us too soon. How nice that he contributed to keeping history alive at the museum.