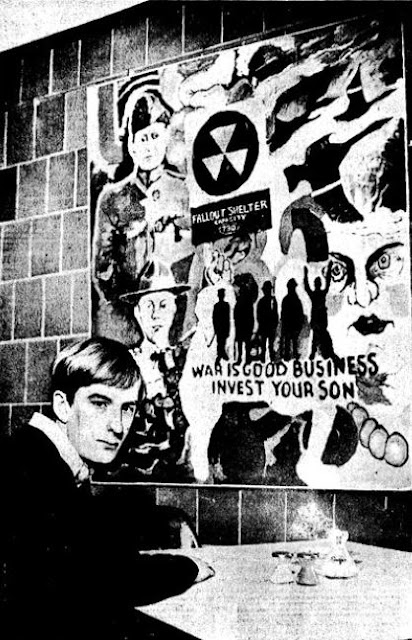 Anti-war efforts begin to play a larger role in Episode 4 of the Burns-Novick Vietnam War epic. The U.S. commitment increases, the supply of idealistic young volunteers is stretched and the draft increasingly reaches into more privileged classes to fill the gap, snatching young men inattentive to academics from colleges and universities.

The result, Burns-Novick suggest, helped shift the supply of fuel for the anti-war movement from early moral outrage of a few to the rapidly expanding self-interest of many --- young men more likely to be considered middle class and their families and friends.

This brought to mind the case of a young man from Chariton, Joe Draegert, now a successful and critically acclaimed artist based in Stockton, California, but then a sophomore at the Kansas City Art Institute. Inadvertently, Draegert became briefly, at least, a national poster boy for the anti-war movement.

Draegert, whose parents were the late Addison L. and Harriet Draegert, was not a privileged youth but he did have considerable talent and after graduation from Chariton High School had enrolled as a scholarship student at the Kansas City Art Institute.

Thoughtful students on campuses nationwide at the time were discussing the Vietnam War and the situation in Kansas City was no exception. In response, Draegert created a 6-foot by 8-foot painting, a commentary on war resembling a collage, borrowing some of the techniques of Robert Rauschenberg, who also had studied in Kansas City.

Among other images, the painting incorporated a portrait of the artist's uncle, a World War I veteran; another military portrait; small military figures in silhouette; a flight of geese with red, white and blue chevrons on their wings; a fallout shelter sign; and the line --- "War is good business. Invest your son."

Draegert's instructors liked the painting and displayed it in the Institute cafeteria, where outstanding student work often was placed.

Some time later, a young man in the military, bound for Vietnam, passed through the cafeteria on his way to visit one of the Institute cooks. He spotted Draegert's work and was offended by it. The man called The Kansas City Star, which sent a photographer, and The Star featured the result and a related story as centerpiece on the front page of its March 2, 1966, edition.

"I'm going to Vietnam today," the man reportedly told a Star reporter. "I have a wife and kids and I just don't like the painting."

Both the image and the story were distributed nationwide by wire services after that and Draegert and his painting were featured in newspapers from from coast to coast during early March, including The Des Moines Register.

The painting and the publicity surrounding it and the artist were front page news in The Chariton Leader on March 8. The Leader republished The Star story --- but not the photograph --- using instead a file photo of more bucolic Draegert works that had been featured the previous year as part of a one-man show at First State Bank.

The Leader carried the story under the headline, "Absurdity of War --- Theme of Painting," with a locally written introduction that reads in part as follows: "A young Chariton artist studying at the Kansas City Art Institute has found himself being misinterpreted and the subject of considerable comment as a result of an Associated Press wire photo of one of his paintings. The picture appeared in a recent Des Moines Register edition.

"Joe Draegert, of Chariton, son of the Addison Draegerts, completed an oil painting in which he expressed the thought that 'war is abusurd.' Unfortunately, the painting has been classed by may viewers as a draft-card burning protest to the conflict in Viet Nam in particular."

Which of course it was, to an extent --- minus the draft-card burning. But it appears that The Leader editor felt some sort of damage control was necessary. Draegert's mother, employed by Woolworth's, apparently was taking some heat for her son's expression.

If you're interested in reading more, Hampton Stevens, writing for Flatland, Kansas City, a digital magazine of the Hale Center for Journalism at Kansas City Public Television, caught up with Joe Draegert during late July at his California studio. You can read his report by following this link.

Is it thought that this launched his career?

No. It bears little resemblance to his later or current work --- in fact, no one knows where it's at.