The good old days back home in Saigon .... 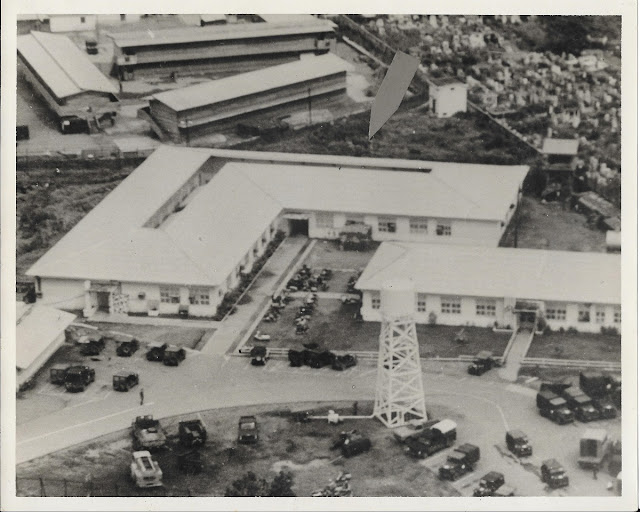 The curious thing about this old 8-by-10-inch glossy, when it finally turned up the other day, is that it made me homesick. As if I could walk through the door at center in the big L-shaped building, into the courtyard, turn left past the administration office, cut through center plantings of tropical vegetation, walk through the door into Analysis and go right to work.

The helicopter from which this image was shot, perhaps in 1968, was hovering over the roof of the Combined Intelligence Center Vietnam (CICV), much larger than the target, the Combined Document Exploitation Center (CDEC). We called the auxiliary building on the right the "snack bar" because it contained, among other things, a big room with attached kitchen where outnumbered GI's joined the Vietnamese military and civilian staff for breakfast (paper-thin omelets and a small baguette of french bread usually; we had no access to a military mess) and occasional meals.

Two other "combined" intelligence units, all I believe formed along with CDEC and CICV in 1966 and for U.S. personnel under the umbrella of the 525th M.I. Group, were located elsewhere in Saigon --- the Combined Military Interrogation Center (CMIC) and the Combined Material Exploitation Center (CMEC). Back then, I could have driven you to CMIC --- my roommate was an interrogator; but for the life of me can't dredge up a single memory of CMEC.

A bus ran daily, morning and evening, from our quarters in the "old french hotel" some distance to the west just off Plantation Road. But many times it was more practical to hail a motor-powered cyclo and pay your own way. At night or in case of emergencies, jeeps. The route was the same --- turn right just past the German Consulate as you approached Tan Son Nhut onto an even busier street then, just past Third Field Hospital, take a left across a busy "Y" intersection into the unmarked narrow lane that paralleled an unused soccer field, past a small cemetery, then through the gate of our small compound.

You can see the big cemetery that was our neighbor on the other side of the compound to the upper right in the photo. Some said our compound had been built on cleared cemetery ground, which may or may not have been true. But our staff did, upon occasion, burn incense and paper offerings and say a few Buddhist prayers in the courtyard --- just in case. I've forgotten who occupied the barracks in the distance. An MP company perhaps? That seems familiar. MACV, "Pentagon East," as well as Tan Son Nhut, was nearby.

This was an ARVN compound, guarded and administered by ARVN troops. Our fellow CDEC workers, other than a couple of dozen Americans and two South Korean liaison sergeants, all were Vietnamese. In Analysis, the amazing Mr. Suk was in charge although he graciously allowed GI team chiefs to believe they had some authority, too. The Vietnamese civilians who outnumbered us also were our friends. Everyone was in love with the U.S. team secretary, Miss Niehm, in flowing white trousers and au dai.

This little trip down memory lane accompanied Episode Six of the Burns-Novick film, The Vietnam War, covering January-July 1968 and the Tet Offensive, which occurred a year and a half before I landed at CDEC. By that time, those of us who lived and worked in Saigon were operating again inside a bubble, convinced that our home was the safest place in Vietnam, far removed from the realities of life in the field for other GIs.

The January-July 1968 period, in the United States, also included the assassinations of Dr. Martin Luther King Jr. and Bobby Kennedy and accelerating racial and anti-war unrest. I was struck by the story of a black Marine who made it safely out of Vietnam --- barely; then landed at home in Boston only to discover that no cab would stop to carry him on home from the airport because he was black. A highway patrolman finally stepped in to force a ride.

And of course in the case of CDEC, there's no going home again. When Saigon fell, some of our co-workers, including Mr. Suk and Miss Niehm, were evacuated to the United States. Many were not, however, and I have no idea of what became of them. To North Vietnamese eyes, they were collaborators. I've looked on "Google Map" for the site of the CICV-CDEC compound a number of times and think I've found the old soccer field. It may be that the CDEC site is now covered by tennis courts.