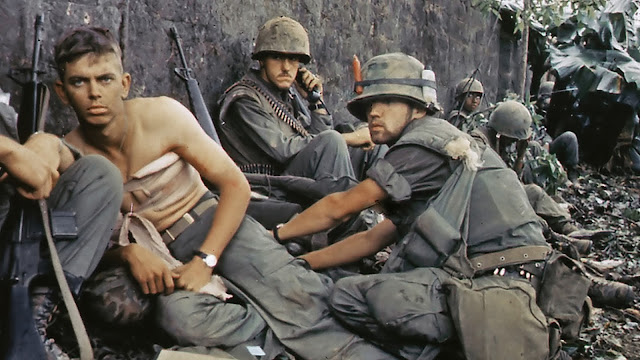 I'd forgotten a helluva lot and there was a helluva lot I didn't know --- hard lessons learned so far (seven episodes in) from Burns-Novick's The Vietnam War.

It's a riveting piece of work and, it seems, only a few people I know watched, are watching or have watched. Too bad. I'm wondering if I'm going to have to watch it again to sort out an overload of information, images and emotions.

My rate is an episode an evening and, while I never have problems getting to sleep, I have awakened a couple of times at 3 a.m., thinking.

I can understand why some would avoid it --- combat veterans carry their own reasons with them and those I respect; for many of us, time is an issue. Those Tweets and Facebook "shares" about trivialities do take effort.

To be a little fairer, however, The Vietnam War experience is not that far away from enrolling in a concentrated training course: years jammed into a few days.

One of the hardest parts of watching is just getting to know some of the young combatants featured --- and then they're killed.

Episode 8, which I'll watch tonight, covers public revelations about the My Lai massacre, the Cambodian Campaign (1 May-30 June 1970) and Kent State (May 4, 1970), all pivotal events in the anti-war movement.

Much of what I know about My Lai came later. I was closing out in Washington, D.C., home on leave or en route to Vietnam when this news hit the front pages and the evening news. It was not uncommon to avoid news about Vietnam when you knew you'd be there in a few days.

We were too busy to think during the Cambodian Campaign --- and barely aware, in Vietnam, of Kent State.

On reason I wish more would watch is the film's useful remainder of what an awful time the 1960s and early 1970s were --- much worse, actually, than many of the tempests in teapots we're currently engaged in fussing about. I'd actually forgotten (or suppressed) a lot of that.

It was fascinating to relive Nixon's ascendancy to the White House. I'd forgotten just how much I disliked that man and the details of the treason he engaged in that, in part, put him there. At least he didn't have Twitter; while he may have been evil, he wasn't an amoral clown elevated to the White House by jackasses.

I tried to watch this documentary for several nights. As a person who watched the war from the evening news from my childhood home, college homes, and several more years as a young adult, I was horrified and like you said "overloaded" by the information. In the end, I gave up on trying to watch. About this same time I went to visit the Herbert Hoover Presidential Library museum. They have a display of objects that past Presidents used during their Presidency. When I got to the display for Nixon, I literally got the heebee jeebies and shook in my skin! So much of this era just left us raw.