Ten days with "The Vietnam War" 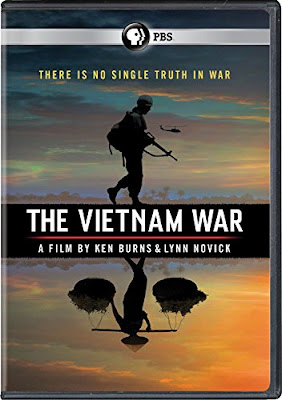 You'd think that I'd have something useful to say after investing 10 consecutive evenings --- one episode at a time --- to the Ken Burns-Lynn Novick film, The Vietnam War. It was a learning experience, however; now I've got to go back and watch at least some and maybe all of the episodes again.

Later last week, after the marathon, I watched a panel discussion sponsored by The Asia Society that featured, in addition to Burns and Novick, Thomas Vallely --- a U.S. Marine combat veteran of the war, specialist in modern Vietnam and senior advisor to the film. He acknowledged that, going into the film, he knew very little about the war. Me, too.

Another Asia Society panelist who made frequent appearances in the film, Duong Van Mai Elliott, observed that everyone involved in the war had a story, but that the stories do not necessarily form a comprehensible whole.

A little like the blindfolded men examining an elephant in an attempt to discern its true nature, it all depends on where you're standing. That kind of applies to the film, too.

But the film certainly is a masterpiece in that it pulls into one comprehensible narrative a majority of the elements involved in the war and it certainly is beautifully (at times, horrifyingly) produced. Thoughtful people will disagree, however, about the play given by the film makers to some of those elements; others will argue that elements are missing. It is, however, the best widely accessible launching point we have had until now for further thought, investigation and analysis.

You do have to pick it apart and think for yourself, however. I managed to get so preoccupied with  fussing about the limited examples of brutality committed by U.S. troops during the war that I didn't start until later pulling together elements of the film that clarify the consistent and horrendous brutality of North Vietnamese regimes that consciously facilitated the slaughter of millions as acceptable means toward an end.

Nor had I really thought about the fact that, as Duong Van Mai Elliott stated during The Asia Society discussion, one of the greatest tragedies of the war was how poorly served the people of South Vietnam had been by the supremely corrupt regimes that governed them --- with U.S. support.

But it is a learning experience. I was in Vietnam when the Kent State shootings occurred; it surprised me to find out that, at the time, a majority of Americans thought the shootings were justified --- national guardsmen killing unarmed students.

Then again, I got up this morning to a Facebook exchange between a couple of friends spitting fire at the 13 Ames High School marching band members who left the field Friday night in protest prior to The Star Spangled Banner. Perceived as disrespectful toward the national anthem, the flag, veterans, firefighters, EMTs and America in general, you'd almost think that these gentle ladies, had they been there and appropriately armed, would have shot the little bastards.

The more things change, the more they remain the same.