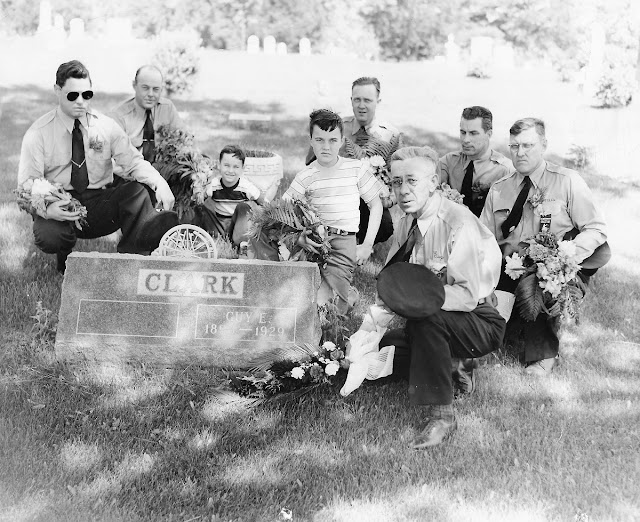 This old photograph from the Lucas County Historical Society collection --- six volunteer firefighters and two boys grouped around Guy Clark's tombstone --- has a tragic story to tell, one most likely not remembered by those who walk by his grave in the Chariton Cemetery today.

The firefighters had come to Clark's grave to deliver a wreath from the Scribner, Nebraska, Volunteer Fire Department whose members had remembered their fallen comrade in similar fashion since 1929. In that year, Guy had been killed in what was at the time the greatest disaster to befall Nebraska firefighters --- a full quarter of Scribner's 24-man force dead in one awful night.

Guy Clark, born Jan. 8, 1890, to James W. and Helen E. (Crall) Clark, had grown up in the Oakley neighborhood northwest of Chariton and was a barber by trade. He had married Lura Fletcher and they became the parents of two sons, Gerald and Bernard.

Until the fall of 1927, Guy had been working at the Lincoln Barber Shop, co-located with the Lincoln Theater on the first floor of the three-story Temple Building on the south side of the square, so-called because the Knights of Pythias club rooms, or "temple," occupied elaborate quarters on the top floor.

During September of 1927, the family relocated to Scribner, Nebraska, today a town of some 850 souls located northwest of Omaha in Dodge County. Guy opened his own shop on Main Street there. A veteran volunteer firefighter in Chariton, one of his first acts in Scribner was to join that city's volunteers, too.

Nearly everyone in Scribner was in bed and sound asleep when the fire alarm rang through its streets just before 11 p.m. on Thursday, March 7, 1929. Firefighters scrambled out of bed, rushed to the fire station and then headed to the Carl Hollander farmstead, located on the edge of town and consisting of a house and various outbuildings, including a small barn that was ablaze.

A couple of hundred spectators dressed themselves more carefully and headed to the scene either out of curiosity or a desire to be helpful.

Hollander was chairman of the Dodge County Board of Supervisors and what no one else in Scribner knew going into that night was that some time earlier a shipment of 10 cases of dynamite, between 250 and 500 pounds (estimates vary), had arrived and had been stored in the barn that now was burning. The commissioners planned to use the dynamite to break up spring ice jams on the Elkhorn River, which flows through Dodge County.

Hollander was at the home of a neighbor when the fire was discovered and according to some reports he rushed home and attempted to warn the firefighters. One account states that he ran toward them yelling, "Dynamite, be careful, dynamite!" According to another account, he arrived on the scene and reassured the firefighters that the dynamite would not explode because the caps were stored elsewhere --- that the fire would just burn out.

Whatever the case, at 11:18 p.m., a massive white flash illuminated the Nebraska night sky and a blast reportedly heard as far away as Fremont, some 25 miles distant, obliterated the burning barn and nearby buildings, shattered windows across Scribner and sent debris and bodies flying high into the air.

Four firefighters were killed outright --- Guy Clark, age 39; Gus Pittack, 26, assistant postmaster; Fred Felcner, 22, a feed and grain merchant; and Harry Wibbels, 24, an auto mechanic. Two others died after they had been carried from the scene: William F. Strube, 34, a garage owner; and Arthur Schoeneck, 25, a truck driver.

In addition, 40-60 firefighters and bystanders were injured, sustaining burns, injuries related to the concussion and wounds caused by flying debris. A nail reportedly was driven into the heart of one firefighter who survived --- and lived to be 100 with the nail still in place.

Only a hole in the ground remained where the barn once had stood, so a cause for the fire that set off the blast never was determined. An automobile had been parked in the barn when the fire broke out and some speculated that faulty wiring had started a fire that ignited the gas tank, resulting in flames of sufficient intensity to set off the dynamite.

Scribner had a hospital at the time, where the dead, dying and injured were taken. But it was overwhelmed. The town's two physician worked through the night, treating the injured. Beds were carried in from nearby homes. Dr. A.C. Stokes, head of the Omaha chapter of the American Red Cross, arrived before daybreak on Friday with six nurses to help out. Eight other physicians from nearby towns also arrived to help treat the injured before dawn or later on Friday morning.

The dead were taken to the undertaking rooms at the Arthur Furniture Store.

Guy Clark's funeral was held on Saturday afternoon in Scribner, then his remains were placed on board a train for the trip --- with his family --- to Chariton, arriving Saturday night at the C.B.&Q. Depot.

On Sunday afternoon, a second funeral service was held at First Christian Church in Chariton and Clark's body, accompanied by an honor guard of firefighters, was taken to the Chariton Cemetery for interment.

The mayor of Scribner, and others, blamed Supervisor Hollander for the disaster, charging that he should have made it known in the community that the dynamite was present. No blame ever was formally assigned, however, tempers cooled and Hollander was re-elected to further terms on the board of supervisors.

A city insurance policy paid benefits to the families of the fallen and other kindnesses were shown --- a collection to fund the educations of the children of one of the fallen, for example.

During June of 1935 a seven-foot granite monument in honor of the six fallen firefighters was erected in Scribner's town park and it remains to remind residents of the great disaster. And so long as any of the Scribner firefighters present on that March night in 1929 lived, their comrade buried in the Chariton Cemetery was remembered, too.