Even Baptists can turn from sin and toward the light 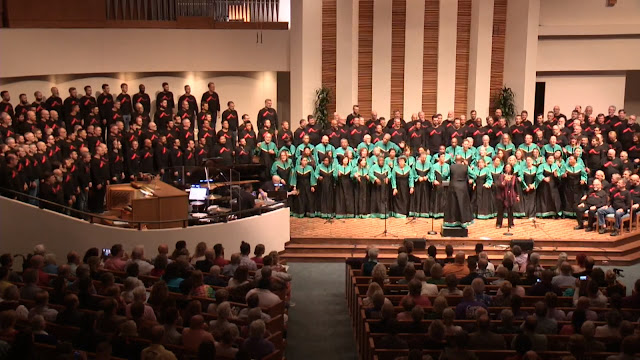 I got to thinking Friday night --- while watching a live stream of the San Francisco Gay Men's Chorus concert in the sanctuary of First Baptist Church, Greenville, South Carolina --- about the sweet Baptist lady here in Chariton who some time ago asked a friend, "What does he (me) have against us?"

The answer is two-fold. It's a collective and not an individual thing; some of my best friends, as they say, have been and still are Baptist. But if you were gay you'd know the answer and wouldn't have to ask the question.

Two hundred men of the chorus, accompanied by about 50 members of the Oakland Interfaith Gospel Choir, have been on a concert tour of the South during the week now past --- from Mississippi to North Carolina, wrapping up last night in Charlotte. Included was an emotional stop at Brown Chapel AME Church and a walk across the Edmund Pettus Bridge in Selma, Alabama.

But for many, I suspect, that appearance in First Baptist's vast sanctuary filled with a standing-room-only crowd was among the most meaningful because it represented a brief homecoming for those who had been cast out over the years by their churches.

Other congregations welcomed the musicians along the way: St. Philip's Episcopal and Fondren Presbyterian in Jackson, Mississippi; Baptist Church of the Covenant and Highlands Methodist in Birmingham; and First United Methodist in Charlotte.

But to experience firsthand that evening in Greenville the fact that even Baptists can turn from the sin of the Pharisees and toward the light --- well that must have been stunning.

The San Francisco chorus, organized during the fall of 1978, performed publicly for the first time that year on Nov. 27 during a candlelight vigil on the steps of San Francisco City Hall following the assassinations of Supervisor Harvey Milk and Mayor George Moscone. The featured number: Mendelsohn's "Thou, Lord Our Refuge."

Since then, hundreds of gay men's choruses have been organized worldwide --- even in Des Moines --- but San Francisco is the granddaddy.

The chorus originally had planned to kick off its 40th season with an international tour, but after experiencing the poison of the 2016 election cycle decided instead to embark "on a soul-affirming, life-changing journey ... to share SFGMC's mission of community, activism and compassion throughout the South, supporting our LGBTQ+ brothers and sisters and promoting acceptance and love through music."

Shortly after announcing the tour, the Oakland Interfaith Gospel Choir, with a similar mission, asked to join the tour and the groups began joint rehearsals.

The title of the tour, "Lavender Pen," refers to the lavender pen used by Mayor Moscone --- given to him by Milk, to sign a landmark gay civil rights bill during 1977. The Lavender Pen remains a symbol of the fight for equality for all.

Each of the tour musicians paid his or her own way, $2,000 each, and all money collected through ticket sales and freewill offerings was distributed among charities in the host cities. Travel was by bus and the groups made approximately 30 public appearances during the seven-day tour.

First Baptist of Greenville is, with some 2,100 members, as you might guess, not your typical Baptist church. Organized in 1831, it began to move away from the Southern Baptist Convention as that denomination came increasingly to be dominated by fundamentalists at odds with the traditional Baptist stance of congregational autonomy.

In 1990, First Baptist was a leader among congregations that organized the moderate Cooperative Baptist Fellowship and, in 1999, it severed its ties to the Southern Baptist Convention entirely.

After a period of discernment, the congregation in 2014 adopted the following statement defining its relationship with the LGBTQ+ community: “In all facets of the life and ministry of our church, including but not limited to membership, baptism, ordination, marriage, teaching and committee/organizational leadership, First Baptist Greenville will not discriminate based on sexual orientation or gender identity.”

If you'd like to watch all or part --- or merely skip around to see what's there --- of the Greenville concert, here's the YouTube version. As a church junkie --- who attends for the sheer joy of it all  but without orthodox belief --- and fan of choral music I naturally watched it all again.