Russell rustlers try to make off with the county seat 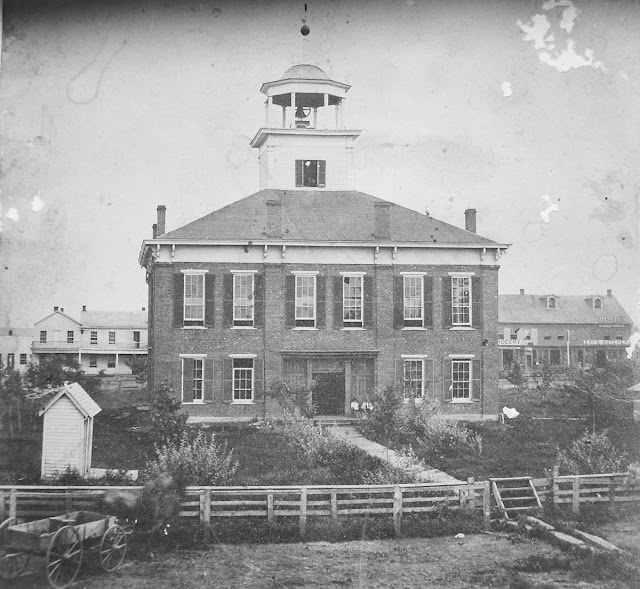 I've gotten a lot of mileage out of this wonderful Civil War-era photograph of Lucas County's 1858 courthouse since it was correctly identified back in 2014 in the Kearney County, Nebraska, Historical Society collection by Jack Hultquist, of Minden, and shared.

Those who have read earlier posts may recall that this lovely old building, constructed in the middle of Chariton's square at considerable expense, had for inexplicable reasons a wooden foundation. By 1890, it was beginning to fall apart although the Lucas County Grand Jury, during the fall of that year, pronounced it safe for another year's use.

That changed during November of 1891, when the Grand Jury --- after completing its annual inspection of the building --- pronounced it a hazard to occupants. The Board of Supervisors ordered its evacuation on Nov. 11, 1891, and had it torn down during early 1892.

Lucas County voters, during September of 1892, approved a bond issue to build the courthouse still in use, but the intervening months had been filled with considerable discussion --- not all of it friendly --- about what should be built and how much it should cost. Lucas County's second city, Russell, some distance to the southeast, entered the fray with a proposal that the new courthouse be located there.

Although no issues of Russell newspapers from that era survive, the following item was lifted from The Russell Recorder and republished in The Chariton Democrat of May 19, 1892:

"Subscriptions are progressing lively for the erection of a new court house in Russell. One of our citizens has, or will, donate five acres of ground on which to build it. Several have subscribed a thousand and many five hundred dollars each. It is believed the full amount to erect a good substantial building can easily be secured. So all the tax payers will have to do is to locate the county seat here, and they will be absolved from paying any taxes for the erection of a new court house. --- Russell Recorder."

That item and perhaps others excited the editors of daily newspapers, including those in Ottumwa and Des Moines, who thereafter engaged in additional reportage, some of which we might today call "fake news." The Chariton Herald published the roundup that follows in its edition of May 26, 1892, under the headline "Court House Balderdash."

"The old adage, 'Go away from home to get the news,' never had a better illustration than the following clipping from the Ottumwa Courier:

" 'Russell, Iowa, May 20 --- A lively county seat war is now brewing in Lucas county. At a recent session of the board of supervisors the old house was condemned and subsequently town down. A proposition to erect a new one had previously been defeated at the polls. There is a strong feud existing between Chariton and the balance of the county. This was caused partly by the attempt of Chariton to banish teams from being hitched around the square, as well as the claim that the square was city property and that the county at large had no right to it, and that the new court house should be located on a corner lot and the old park revert to the city. The records show that the park belonged to the county and not the city of Chariton.

" 'This, together with the revelations of Commissioner Van Arsdale relative to the matter of Chariton's not coming up with her full quota of taxes, and depending on the county for municipal improvements has caused the dissatisfaction especially among the farmers. They now propose that if Chariton wants a court house they must build it themselves.

" 'Petitions were started yesterday to locate the county seat at Russell and already have several hundred signatures. C.C. Post, a wealthy farmer living north of Russell, yesterday subscribed $1,000 to erect a suitable building here for court house purposes. T.S. Crozier, another farmer, puts down $1,000. Several of our merchants equally as well and $500 subscriptions are numerous. Besides, there are many well to do farmers in the east end of the county that will do as much as the first two mentioned, and it is thought that $50,000 can be raised in this way, not for the purpose of bribing voters, but to erect a county building at Russell, if necessary. So what was looked upon as a huge joke by Chariton may turn out to be a very serious matter. A monster mass meeting is announced for Litzenberg's hall tonight, and two bands will be in attendance and strong speeches will be made.'

"The Des Moines Leader has the same thing under day of May 23rd. Several of the Chicago papers have contined similar statements, doubtless from the same source, while the Des Moines Captial, under date of Ottumwa, Iowa, May 23, furnishes the additional information that, 'Mass meetings are being held and the entire county turning out, and the Chariton people are alarmed and understand that a terrible fight is upon them.'

"As a matter of fact, none of the points raised in these hyperbolical statements have been discussed by either the people of Chariton or the county, outside of the vicinity of Russell. The fact that our Russell friends have been able to create such a furor among outside newspapers, over a little innocent fun they are having down there all by themselves, will be as surprising to the level headed farmers of the county as it is amusing to the people of Chariton. If the good people of Russell imagine there is any benefit to be derived from their court house antics we have to disposition to interfere with their harmless amusement." 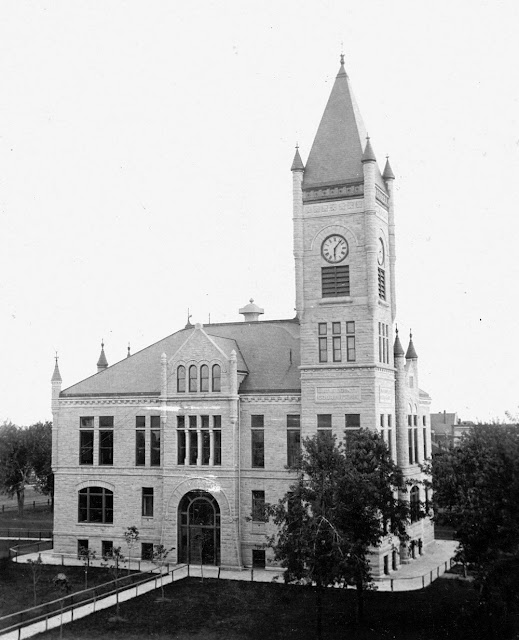 As noted earlier, any relocation efforts under way in Russell came to naught. Voters approved a bond issue for a new courthouse --- in Chariton --- during September of 1892, plans were approved and bids let during October and immediately thereafter foundation work commenced. The new courthouse was dedicated two years later, during May of 1894.
Posted by Frank D. Myers at 5:58 AM