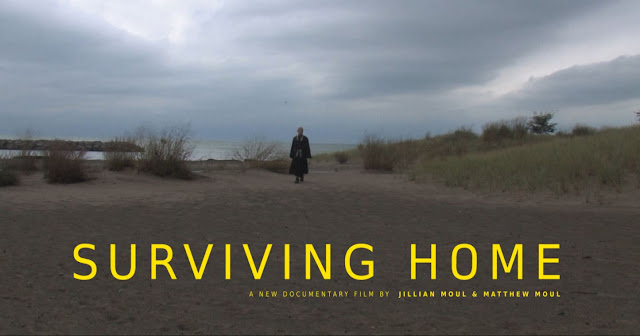 Matthew Moul's surname is not a familiar one in Lucas County. But had his grandfather, Mark, not been killed in combat during World War II, the Emmy-award-winning freelance film and television editor and producer most likely would have been known as Matthew Bingaman. And that would have been a different matter.

The news here is that Surviving Home, a new documentary film co-directed and produced by Matthew and Jillian Moul, will have its world premiere Nov. 2-12 during the St. Louis International Film Festival. Here's a description of the film from the Cinema St. Louis web site:

"In honor of Veterans Day, SLIFF offers a free screening of “Surviving Home,” an intimate documentary that follows four veterans over an eight-year period as they rebuild their lives after war. Interwoven with their stories are veterans' voices from across the United States. The film’s principal subjects had vastly different combat experiences and challenges, and they’ve taken equally diverse paths on their difficult journeys to recovery. A World War II vet is part of a generation that stoically resists talking about their experiences. A Vietnam vet becomes a Buddhist monk in an attempt to reconcile his guilt over the people he killed. A severely burned Persian Gulf and Iraq War vet, who lost an arm on his fourth tour of duty, still wishes he could go back into combat. And a female Iraq War vet suffers less from the trauma of war than from the sexual assault she experienced at the hands of her “brothers.” Through perseverance, humor, inner reflection, strength, and a determination to help others, these vets overcome many obstacles, but the road ahead continues to bend in unexpected ways. Their unique paths of healing and discovery shed light on the long-term burdens of war and reveal the miraculous power of the human spirit." 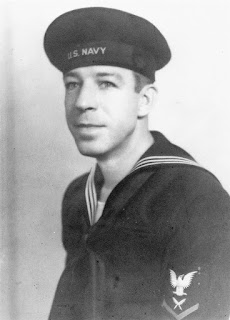 Matthew's grandfather was Lucas County native son Mark D. Bingaman (left), son of Robert and Elsie, husband of Marcella, and father of Robert Lee, not yet a year old when Mark died on March 19, 1945, aboard the U.S.S. Franklin near the Japanese mainland when it was struck by two armor-piercing bombs dropped by a single Japanese bomber. Although the ship survived, barely, 836 members of its crew were killed. Mark, with the others, was buried at sea. A cenotaph in his memory is located in Oxford Cemetery.

In the years that followed, Matt's grandmother remarried and Robert Lee was adopted, assuming the surname "Moul." Matthew, who considers Mason City his hometown, is Robert Lee Moul's son.

Matthew and I became acquainted during 2011 because the Lucas County Historical Society collection includes a photograph, uniform and correspondence related to his grandfather.

You can learn more about the film by going to its web site, which is located here. And here's a brief biography of Matthew from that site:

"Born in 1973 in Dubuque, Iowa, Matthew Moul is a Primetime Emmy-winning editor and producer and makes his directorial debut with Surviving Home. He was co-executive producer and editor of the 2015 documentary series, The Runner-Up, produced by Jonathan and Simon Chinn, which was a critic's pick in the Los Angeles Times. Matt has worked with HBO, Showtime, PBS, and AMC among many other networks over the course of 14 years. He has three Emmy nominations as an editor, and was part of the bilingual team which earned a Peabody Award for KCET's educational series, A Place of Our Own/ Los Ninos en su Casa. He also edited Addicted Twins for Paramount Domestic Television, which won a  Prism Award. He graduated from the University of Southern California with a B.F.A. from the School of Dramatic Arts and was a National Merit Scholar."

Down here in Lucas County, Grandpa Mark would have been proud.