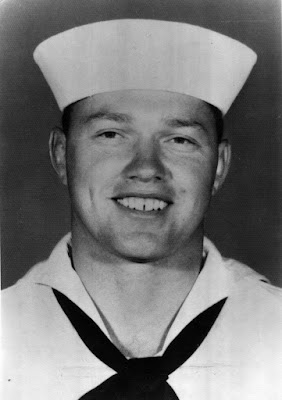 The circumstance of war had been relatively kind to Lucas County by the time 1969 dawned and began to rise on the horizon.

Accelerating warfare in Vietnam during previous years had been reflected in deployment reports for many of its young men in the Chariton newspapers and accounts of wounds incurred --- but the scattered stories of death in combat were limited to neighbors in adjoining counties or to grandsons, nephews and cousins whose homes were elsewhere.

That would change as conflict escalated in the United States and a new president began to fulfill his campaign promise to withdraw troops from Vietnam.


Just two months earlier, during late October of 1968, the Herald-Patriot had shared in a front-page story parts of a letter home from a young man from rural Chariton, Petty Officer 3/C Larry Ray Peterson, then serving aboard the supercarrier USS Constellation in the Gulf of Tonkin, off Vietnam.

Peterson, 27, son of Jesse G. and Wilma Peterson, was an aviation electronics technician in Helicopter Combat Support Squadron I. His unit flew guard for the launching and recovery of aircraft from the Constellation as well as making mail visits and personnel transfers to other ships in the area.

In his letter, published on Oct. 24, Peterson gave an account of his role in the rescue of LCDR Wayne Lambertson, 31, of San Diego, pilot of a Phantom F4-B jet that went down immediately after takeoff from the Constellation.

"The plane went over and the pilot couldn't pull it out shortly after being catapulted from the carrier," Peterson wrote. "We were already aloft on airborne guard duty and I yelled at the pilot that we had a plane in the water. We were over them in a minute, spotting the pilot's light, a director's wand, a cone-shaped flashlight for directing planes at night aboard a carrier.

"The motor whaleboat from a destroyer arrived shortly and picked up the radar intercept officer from the plane, but our crew was having difficulty getting Lambertson free of his entangled parachute shrouds.

"I went into the water to help. Usually you can pull a man away from his chute but this time we couldn't do it since they were all tangled around his feet. I asked if he was ok, so that I could move him more freely than I could if he had suffered back injuries in the crash. One man lifted him up and I went to work on the lines, using my knife while I made several dives to completely free him. Time was important because the chute, which can have a terrific pulling effect, was starting to pull him down.

"To make matters worse there was a sea snake in the area but when we got into the water it scurried away a short distance and remained an observer. Finally, the two of us in the water got the lines all cut and he was lifted into the helicopter. We were exhausted but happy."

By mid-June, 1969, the U.S.S. Constellation had been redeployed and was cruising off the coast of California. Peterson was assigned to a crew based at the Imperial Beach Naval Air Station.

Late Thursday, June 12, Peterson's crew received an emergency call from the Constellation, then 50 miles offshore, reporting that a sailor --- SPO James F. Dean, 47 --- had been injured when blown off its flight deck by a jet blast and needed immediate transport to a naval hospital.

The shore-based crew boarded a UH-2c Seasprite turbo-powered helicopter and flew to the Constellation where they picked up the injured man as well as Capt. Andrew W. Stevenson, 45, chief medical officer of the Constellation; and Wayne Zarling, 45, a civilian technician who had been working aboard the Constellation and needed a ride back to shore.

At 1 a.m. Friday, June 13, nearing home, the helicopter inexplicably crashed into the sea seven miles northwest of Point Loma, killing all aboard.

A Navy search and rescue crew worked the crash scene for approximately six hours and was able to retrieve the bodies of Peterson and the pilot, Lt. Richard L. Fitzsimmons, 26. Lost at sea were Dean, Stevenson, Zarling and Lt. Leonard E. Goza, 29, the co-pilot.

The news of Peterson's death was reported under a banner headline in The Chariton Leader of Tuesday, June 17.

Born Oct. 23, 1941, in Osceola, it was reported, Larry had grown up near Derby and Chariton. He was a 1960 graduate of Chariton High School and also had attended Simpson College and the University of Iowa before enlisting in the Navy during March of 1967. In addition to his parents, he was survived by two daughters, Laurie Lynne and Nicole Rae, and a brother, Glenn.

His remains reached Chariton later that week and funeral services were conducted on Thursday, June 19, at Beardsley-Fielding Funeral Home. Burial followed in the Goshen Cemetery.

Although Larry had served previously in the Vietnam War zone, his death did not occur there and so his name does not appear on the Vietnam Veterans Memorial Wall in Washington, D.C., a circumstance that made him no less a hero to his family and friends in Lucas County.

Larry's death was the first involving a Lucas Countyan during what sometimes is described as the "Vietnam Era." It would not be the last.