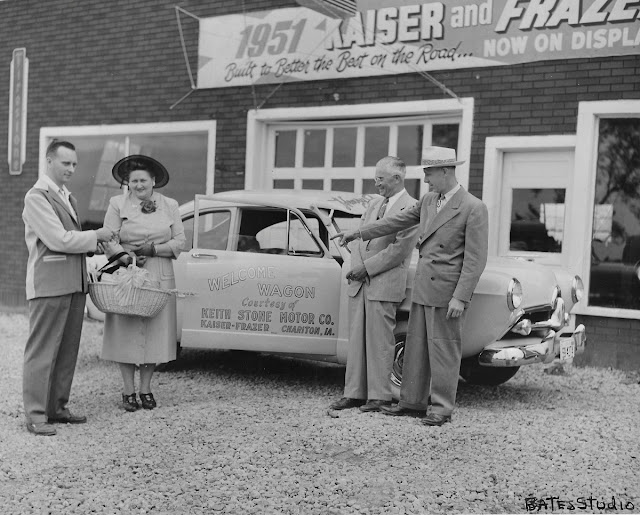 I've been trying to figure out what the response would be, in 2017, if Johanna Holmberg drove out of the past in Chariton's 1951 Henry J Deluxe Sedan Welcome Wagon and pulled into the driveway of newcomers, fully expecting to find the lady of the house at home.

Back then, there was a good chance the lady in question would have been; today, she'd most likely be at work. If not, the sight of Johanna, sailing toward the house like a fully rigged clipper ship with basket in hand, might result in a call to 911.

But those were different times.

Johanna --- a magnificent woman who also was the mainstay of practically every do-gooding organization in town, one of the rocks that formed the foundation of Sacred Heart Parish and "stringer" (local reporter) for The Ottumwa Courier and The Des Moines Register --- was Chariton's first fully fledged Welcome Wagon hostess.

The photo here appeared in The Herald-Patriot of Sept. 20, 1951, and shows Johanna receiving the Welcome Wagon keys from Keith Stone as Mayor Noel Cloud and Joyce Klepinger, president of the Chamber of Commerce, look on approvingly.

By 1948, when Chariton's chapter was organized, Welcome Wagon International was a nationwide business operating in more than a thousand cities and small towns. It worked via trained hostesses in cooperation with Chambers of Commerce, city governments and other local organizations to gather information about all aspects of community life as well as various gifts from local merchants, package all of that in baskets and hand-deliver the results to newcomers. The hostess also served as a good will ambassador for the community, prepared to answer any questions about it (or locate the answer if it wasn't immediately apparent).

Johanna completed her training in New York City during August of 1949 and went to work officially on the 15th of that month. As the years passed, she became a regional leader in the organization in addition to serving her hometown. For some years, she also headed up the Welcome Wagon Newcomers Club, a social organization that met one evening a month.

The Holmbergs (Johanna's husband was Paul) had arrived in Chariton just after their 1927 marriage when he took over management of the A & P Grocery Store. After 12 years in that position, he signed on as secretary of the Lucas County Soldier's Relief Commission and continued in that job for 27 more years. He died in 1977.

Johanna continued as Welcome Wagon hostess into the 1960s and the program itself endured in diminished form into the 1980s. She died during 1986 in Omaha, where her daughter, Sandra, lived.

Times were a changing, however, and in 1998 Welcome Wagon International fired all of its hostesses and hired telemarketers instead. It continues to function, sort of, from headquarters in Florida.