Taking the knee, walking off the field .... 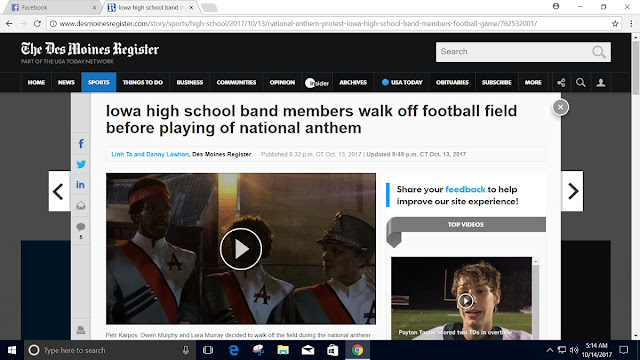 I'm proud of the 13 members of Ames High School's marching band who walked off the field last night before "The Star-spangled Banner" to protest racial injustice --- and ended up prominently featured in various media. And of Darius Moore down at Clear Creek-Amana, who continues his practice of kneeling during the anthem as standing teammates lock arms to show support for his right to do so.

The band members had planned to kneel, too, according to a report in this morning's Des Moines Register, but were instructed by an administrator to walk off the field instead.

The only troubling aspect of the Ames situation is that administrators also apparently told scholars who had planned to wear American-themed attire in the student section to choose another theme. What's fair for one student, it seems likely, should be fair for others, too.

I hope some are remembering the 7-2 1969 U.S. Supreme Court ruling in Tinker v Des Moines Independent Community School District that in effect established the right to non-disruptive free speech inside schoolhouse doors.

The only disruption in Iowa involved the ruffled feathers of some Friday night patriots. Apparently a few cursed the Ames students as they walked off the field. How very adult.

Ames High School sophomore Lara Murray said she decided to walk off to highlight inequality in the United States, The Register reported. "How can we be unified if there's racism, sexism and homophobia in our school?" Murray asked. "I had a lot of second thoughts on it, but I thought I was going to regret it more if I didn't do something."

Now you watch. As the days pass, the ruffled feathers crowd is going to suggest that high school students should be seen on the football field gladiator-like to entertain the oldsters, but should otherwise keep silent because, you know, they don't know what they're talking about.
Posted by Frank D. Myers at 6:38 AM