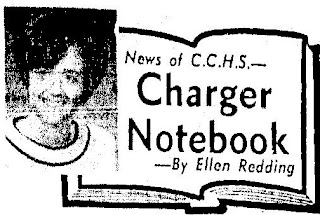 I set out quite a few years ago --- before back issues of newspapers had been digitalized and archives equipped with search engines --- to track down all of the Vietnam War dead in a multi-county area of north central Iowa as part of a regional newspaper feature I was editing. This involved working the newspaper "morgue," file cabinets filled with categorized clippings, and scrolling page by page through microfilmed editions.

One thing became evident. Early in the war, death in Vietnam was front-page, banner-headline news in a small-town daily. As the body count increased, the stories moved increasingly to inside pages and became more difficult to find.

Lucas County, of course, is much smaller than Cerro Gordo (I was employed by the Mason City daily) and more fortunate in terms of loss. Only one of our young men is carried formally as a Vietnam loss, although two Wayne County men and one from Mahaska were former residents at the time they were killed.

When I graduated from Russell High School in 1964, "Viet Nam" still was two words and we barely knew where it was at. That changed during 1965 and as the war accelerated and the supply of information --- and news about the war --- increased.

By 1967, when my childhood neighbor and 1965 Russell graduate Carl Werts arrived in Vietnam during January with the 9th Infantry Division, his deployment was front-page news in the Herald-Patriont of Feb. 9 --- three paragraphs, one a reference back to World War II noting that the 9th had "boasted" four Medal of Honor winners during that great conflict.

Soon after, however, so many young men from Lucas and other counties were being deployed to Vietnam that neither the military reporting system nor local newspaper editors could keep up and these types of stories diminished in frequency and usually were moved inside when they did appear. References to World War II disappeared.

By late 1969, the volume of news and information about the war was sufficient to ensure that anyone who was paying attention was fully aware of the war and could be as well informed about it --- barring outright lies from government officials --- as he or she chose to be.

In Lucas County, heightened awareness came during July when Chariton Green Beret Dennis W. Bingham, 21, was killed on the 17th in combat in Laos. The Herald-Patriot reported his death under a banner headline on July 22. The location was identified as "the battlefields of Vietnam."

During November, the war was of sufficient concern that it was the topic of a symposium organized by Chariton High School students and reported upon in The Charger Notebook of Nov. 20, as follows:

A student-organized assembly program was presented to the student body and the public Monday morning at the high school. A bold banner of "We the People" above a 10-foot American flag set the stage for the discussion of the Vietnam conflict, pro and con.

The assembly opened with mass singing of "My Country Tis of Thee" and the Pledge of Allegiance led by Mike Gardner. Dennis Oliver, who acted as moderator of the program and introduced the speakers, explained the purpose of the assembly by stating, "... not for the purpose of protesting the Vietnam war, but merely a symposium to further educate the people of our community on this most controversial subject."

William Shuey, faculty member, spoke first and presented the background history of the Vietnam war. Four senior students next presented opinions representing the local young peoples' opposition or support. Cindy Davidson and Ron Boyd spoke in favor of the present American policy and Barry Foust and Sue Danner spoke for those against the present policies in Vietnam.

Karen Stansbery, a CCHS junior, spoke of her personal opinion since her brother, Gary, has been in Vietnam. She also read a list of names of local boys presently serving in Vietnam.

Richard Trigueros presented his opinion as a foreign exchange student, reflecting the Argentine feeling about the war.

The next speaker was Ron Prough, a local man who recently served eight months in Vietnam. He explained some routines of a soldier's life, and as a veteran of the conflict supported U.S. efforts, saying "We were asked to help by the South Vietnamese government, we accepted, and now we should feel obligated to help until we are no longer needed."

State Senator Don McGill spoke upon the the political views of the war, outlining the policy being taken presently by the administration. Senator McGill, native of Melrose, represents Monroe, Lucas and Appanoose counties in the state senate.

The Rev. William Quick presented a theological view of the war, suggesting the religious importance of the problems of this war.

A brief period was left open at the end of the assembly for questions from the audience directed to the previous speakers.