This is the third and for now final letter home from Vietnam, written during 1969-70, that I'll share. Maybe a few paragraphs sometime from later letters, maybe not.

As my year in Vietnam continued, I was promoted to Specialist 5 and then made a team chief at CDEC. Because holders of the specialist rank in the odd military universe aren't supposed to be in charge of anyone, I was made an acting sergeant, wearing stripes.

My Vietnam experience was not typical; I have nothing to complain about. After a year, I made my way home via Tokyo, Seattle, Denver and Des Moines, dumped unceremoniously back into civilian life. It was like being dumped into a foreign country with limited language skills --- and to a point, still is.

I'm grateful to my friend, Steve, for sharing the following comment elsewhere, via Facebook, referring to my description of the hotel where Co. A, 519th M.I., was housed. His experience was more typical:

"The life of luxury in Vietnam! No piss tubes, no outhouses and shit burning, cold anything or choices of food, a near impossibility for most of us.

"I was eighteen months in Vietnam before I saw my first flush toilet and that was at the Americal Division Officers Club that a Navy friend of mine and I sneaked into wearing Navy chief uniforms. (According to my friend, the Army had no idea about Navy rank, and, I guess since we didn't get arrested he was right!)

"I made a few trips to Saigon, I bought nomex flight gloves for our crew chief and door gunner on the company ship on the black market, the only place you could get them.

"We suffered up country because of the GI's who would sell stuff on the black market. Vietnamese had a taste for menthol cigarettes and Kools and Salems were very marketable. Unfortunately the military supply system also responds to demand, and with thousands of cartons of menthol cigarettes going to the black market the system responded with thousands more cartons of menthol cigarettes, but less Winston and Marlboros. So after the places who got first pick fulfilled their needs they shipped us all the extra cigs that were menthol. Same for beer, soda, and everything else in high demand hundreds of miles away from places like Saigon. Ever try drinking ginger ale, even when cold, when it is 120 degrees out? Sort of like drinking cold acid, but with no other choices, that was it.

"I'm not complaining (much); we had it a whole lot better than many. D troop, First of the First Cav, track people, never came in for stand down, and if they did, they were put on the bunker line in tents and had a mess hall set up for them. I am told they would celebrate with boilermakers mixed up and dumped into a human skull and would pass it around and drink from it. These are the kind of things that go on far removed from places like Saigon, places where the war's rubber meets the road, so to speak."

Remember, if you read the following letter, that Saigon when it was written was a bubble and U.S. personnel like me who lived and worked there did so within smaller bubbles inside that bigger one. The war itself was a series of parallel universes. We had no idea ....

I just got home from work about an hour ago; have been  up to the club for a sandwich and am about to start sending Christmas cards.

I really enjoy the work. It's a good fit. As written before, I'm working as an editor in the Analysis Section of CDEC (Combined Document Exploitation Center).

As I also may have written before, CDEC processes documents captured across Vietnam. These documents range from unit reports on rice rations through personal letters and items removed from the bodies of Vietnamese KIA (sometimes stained with blood) to "secret" reports on enemy plans for attacks and offensives.

The documents arrive at Screening by helicopter, courier, truck, about every other means. They arrive in paper sacks, plastic bags, ammo boxes, sometimes by the truckload.

In screening, eight or so Vietnamese read and classify the documents, A B C  and D. Ds are worthless and are discarded. The others come to us in Analysis. There are about eight of us editors in Analysis. About 60 Vietnamese translators summarize, in English, the documents and then turn the summaries into us for editing. We in turn, publish three or four "hot" reports daily composed of these summaries. These reports are transmitted throughout Vietnam, to Washington, D.C., and elsewhere. If an item containing something of immediate interest --- a planned attack, for example --- is found a special report is prepared and we deliver that directly to MACV.

If someone, anywhere, ranging from top brass to field commanders, wants to study something further they ask and the Translation Department, also staffed largely by Vietnamese, translates and publishes the entire document. 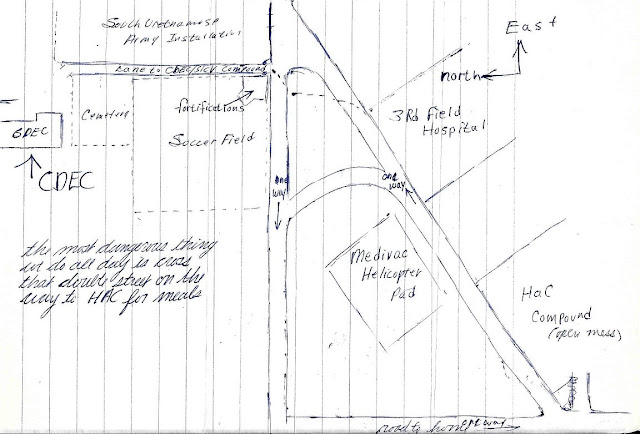 Finally, for tonight, this is the general layout of the area where CDEC is located. We share the compound with the Combined Intelligence Center Vietnam, a much larger building. We're south of the MACV Compound and near the South Vietnamese High Command. Coming in from the southwest from our quarters, you come to a big traffic island. The main drive into Tan Son Nhut is ahead, but take a right past Third Field Hospital. Medivac choppers bring the wounded into a pad located in the traffic island. There's a soccer field, fortified now, across the island from Third Field.

Although the entrance is not marked, you drive up a narrow lane alongside the soccer field, then past a small cemetery, to our main gate. The compound is not large and just beyond our wall to the north is a very large Vietnamese cemetery. Supposedly, our compound once was a cemetery, too.