This the second in a brief series of posts about a few of my letters home from Vietnam, read this week for the first time in the 47 years since I wrote them. Frankly, the content seems trivial and I'm a little sheepish about the whole thing. The first installment is here: "Letters home from Vietnam 1: Arrival."

Some of the reticence has to do with the fact every Vietnam veteran I've met lives with the dead. The same would be true for veterans of any war, especially for combatants, but also for those of us who lived and worked in relatively safe places like Saigon.

I wrote home about a steep midnight dive in complete darkness aboard a big jet toward the Bien Hoa airstrip where runway lights flashed on, then off again as soon as we were down. I've thought of that many times, always wondering how many of the 250-plus men I shared that flight with ended up in metal cases at the mortuary just over the fence from my battalion headquarters, shipped home as freight.

The photo at the top here was my home for a year in Saigon. I've seen it referred to as the Stackhouse BEQ, but I'm not sure it actually had a name. It was supposed to be a secret; no one was supposed to know what those of us who lived there did for a living. There were no signs. But of course there were no secrets in Vietnam.

I came across an online anecdote about the 525th headquarters, also written about in these letters and located in a compound closer to downtown Saigon known as the Ponderosa. It was supposed to be a secret, too. According to the story, a M.I.-type newbie arrived in Saigon and hired a cab to take him there. He did his best to describe his destination to the driver until finally it clicked --- "Oh you mean the James Bond place," the driver said, then drove to the compound gate and dropped him off.

Greetings again from Saigon. We are still at 525th Group headquarters in downtown Saigon, but will go tomorrow morning to our next unit --- the 519th Military Intelligence Battalion about five miles down the street at Tan Son Nhut Airfield, the busiest airport in the world. From the 519th we will be assigned to our field units and in a few days I should be able to send you a permanent address. I have no idea what that will be.

The compound here at group headquarters is a nice place, composed of several Oriental-style, French colonial and more modern buildings inside heavily defended walls. There are about eight major buildings in all with lots of green space, courtyards, flowers, etc., interspersed --- a picturesque place suffering somewhat from U.S. occupation. We are staying in a decrepit old-fashioned French colonial house with porches all around and shuttered openings where there would be windows stateside. We are on the second floor, so there's a good cross breeze inside. 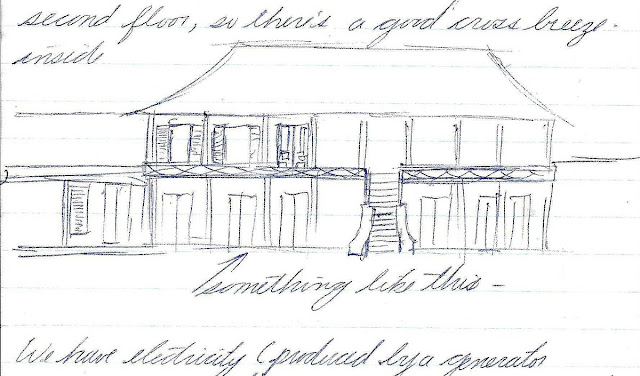 We have electricity (produced by a generator in the compound) and running water (cold) that dribbles; and lizards in the latrine, but it's pleasant.

The food is good and there is a good club across the courtyard where you can get pop, beer, hot sandwiches, etc., and it's air conditioned, so that's where we spend a lot of time. There is a big staff of Vietnamese cooks, waitresses, maids., etc., who do everything within the compound.

Those of us passing through haven't done anything except process now and then, but we're finished now at HQ and so have the afternoon free until we ship out tomorrow.

The climate is tropical --- very hot and humid, but I'm getting used to it. Just like Iowa at its summer worst.

To go back a little bit --- we touched down at Bien Hoa around midnight and then about 2 a.m. went about seven miles by convoy to the Ninth Replacement at Long Binh. They were expecting trouble, so it was kind of a tense ride. Long Binh is a pit, but we were lucky to spend only about eight hours there --- then we were brought here to Saigon --- to Tan Son Nhut --- about noon and picked up by our unit. Our unit (First MIBARS) didn't have a place for us so they sent us up the street to the 525th and we've been here ever since.

One minor problem here is to keep from being eaten alive by mosquiotes. My mosquito net must have a hole in it cuz I've got quite a few bites.

Three Holabird classmates and myself still are together, but will most likely be broken up at the 519th.  Right now, there are five us here together in the room writing, reading and sleeping and it is hot! Guess we'll go over to the club a little later and maybe go back to the movie tonight. And then get a good night's sleep so we'll be ready to run around some more tomorrow and hopefully in a few days I'll have a bed I can call my own and an address you can write to.

I wish I could tell you more about the 525th Combat Evaluation Group and what its job is, but they tell us that's classified and we shouldn't write home about it.

I hope things are OK at home. It sure doesn't seem like Christmas around here. As I said Saigon is quite a city and I can't begin to describe it. So many people, sights and sounds, unlike anything I've ever seen before. And since there is a lull in terrorist activity at the moment, the war could be a million miles away. So don't worry. I'm doing just fine.

Well, I have arrived I think; or at least I sure hope so. We left the 525th HQ Sunday morning and after getting involved in a Vietnamese funeral procession, arrived at the 519th Support (Military Intelligence) Battalion. We spent the day there getting processed and given what I hope will be our final assignments. The 519th is located out in back of Tan Son Nhut Airbase, about 10 minutes from where I am now. Graves Registration, where all the KIA are processed and boxed to be sent home, is just across the fence --- not the most encouraging view.

My three Holabird friends were assigned to the 45th, which staffs CICV (Combined Intelligence Center Vietnam). I was assigned to Company A and understand that I will be doing journalism-oriented intelligence work rather than I.I. work, which is fine with me.

Unless things get messed up, I'll be working for the Combined Document Exploitation Center, again in the city of Saigon. Company A, compared with many troop quarters is a palace. it is a converted French hotel on a cul de sac just off Plantation Road. Two men are assigned per room and each room has a bath. There is no mess hall, but we will be paid separate rations and getting our meals on the economy, from one of the military cafeterias or at an NCO/EM club --- there's one of those on the 4th floor of the hotel.

I am hoping that all goes smoothly because this is where I want to stay, but I guess the next couple of days will let me know for sure. I'll let you know how things are going later in the day.

Well, I am finally settled. Just got back from Finance and learned a little more. I'll be working at CDEC, not as an I.I. but as an editor of translated documents, which is fine with me. The 519th sergeant major noticed my journalism degree when it came time to assign me and decided I was what he needed. CDEC is located in Saigon and we'll go to work every morning about 6:45 by bus, jeep or cyclo, depending on when we get up and what's available. My first day will be tomorrow and I am looking forward to starting work. 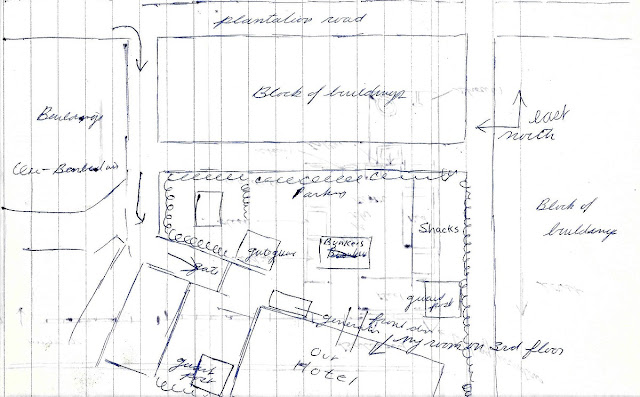 Again, about the hotel. It's fairly new and modern --- our bathrooms are quite nice. Two men to a room and we have the original hotel furniture --- shabby but OK.

Our weapons are kept in an arms room and I understand there are monthly practice alerts.

There is a club on the 4th floor. That's where I am going now to get a cold drink. We have plenty of water (hot and cold) but you cannot drink it. Our water coolers don't work, so it looks like I'm going to be drinking a lot of beer. Before I forget, here is my address. Write!

Norm Prince said...
This comment has been removed by the author.
10:00 AM

Hi, my name is Mike H. I was assigned to the 525 MIGP in july 69. Your drawing of the bldg brought back memories. Clear memories. that bldg you drew at the top of that long flight of stairs was the transient "housing". I had quite an adventure the one night i stayed there. Sitting at the top of that long stair watching the going away party for the group commander. That was the EM club across the square. I was at that location for about 4-5 months then we all moved to the MACV annex compound at tan son nhut. ....if you want to reminisce call me at (i had my ph nbr here but not sure if this lerrer will be openly posted. I live in st louis mo. I was drafted apr 69.... good luck, brother. I'm well, hope you are too. Memories bother me a lot & the dreams are tough the older i get, 71 and counting. By the way my memory recollects that was the 90th replacement battalion at long binh.