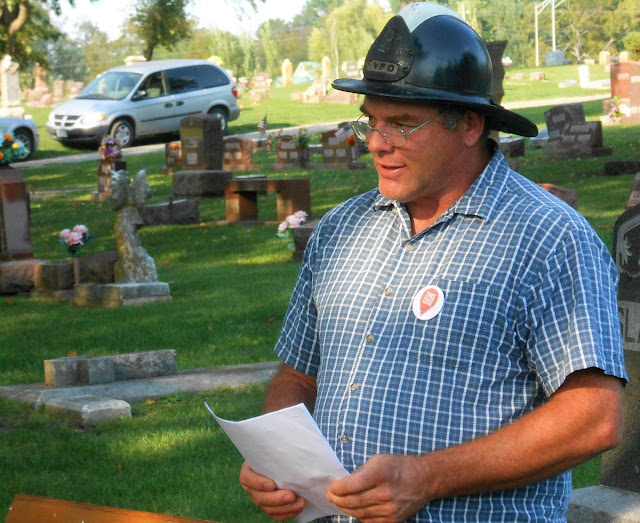 Note: This is the fourth in a series of five scripts prepared for presenters during Sunday's 14th annual Chariton Cemetery Heritage Tour, "Neighbors in Section E." The subject is Templeton Percifield and the presenter, Doyle Smith.

Maybe it was because I got off to such a rough start in life that for the rest of my days I just wanted to see people happy. My name is Templeton B. Percifield, but call me “Temp” --- everybody did. Compared to most of my neighbors here in Section E, I was of no importance. But I did make many of them laugh.

So I’m going to start with a little story today because I’m still the only man who ever rode a goat while being initiated into membership in one of this town’s most venerable organizations, the Chariton Volunteer Fire Department.

I don’t know how they do things uptown these days, but back in the 1880s an initiation ceremony was involved. There was an altar-like affair up to the front of the room with the chief behind it and me in front --- dressed in my best. I was expected to kneel with my forehead on the floor to take the oath.

Now I smelled the goat beforehand and I heard the goat, but they told me there was no goat and that those were just hallucinations of my olfactory and auditory nerves.

So there I was kneeling with my back end in the air when I started to take the oath. “I do most solemnly pledge that ….” WHAM! That goat got me squarely in the rear. I rolled forward, got partway up, stumbled, fell backwards, landed astraddle that blamed goat --- and split my brand new pants wide open.

There was a lot of laughing, but the goat got the worst end of the deal and I got a new pair of pants, courtesy of my fellow firefighters. The goat was retired after that.

Like I said, I got off to a rough start. My folks, Missiner and Sally Percifield, had married in Indiana during 1845 and then my father went off to serve in the Mexican War. Sometime during the mid-1850s, they moved to Randolph County, Arkansas, on the Missouri state line way up in the northeast corner of the state. I was born there during May of 1861, just as the Civil War was beginning, the youngest of nine children.

My folks were Union people in a part of the state where there were deep divisions between neighbors and lots of what you’d call terrorism. In 1866, after the war had ended, Confederate bushwhackers killed my dad.

By that time, my oldest brother, Sam, had moved west into Indian Territory and my mother had watched all of her other children, except Sam and me, die --- some in infancy and some of disease, seven in all, including Link and Marlin, the ones I can kind of remember.

After that, all my mother wanted to do was get me as far away from Arkansas as she could, so we headed north and finally landed in Lucas County, Iowa, where my dad’s sister, Aunt Sarah McClain and her husband, Robert, were living.

In Chariton, my mother met and married a recently widowed boot and shoemaker named Evan Price Young. They married in 1867. He was about 15 years older than Mother, but was kind to me and I mourned him when he died in 1879. My mother lived 20 more years, until 1899, on little more than I could provide her with.

In 1882, when we both were 21, I married Anna Belle Boylan Fisher, left a widow with a young son when her first husband, Nathaniel, died during 1879. I always treated young Alfred Fisher like my own son and we went on to have four more boys of our own, Charley, Theodore, Robert and Ralph. Anna Belle longed for a daughter, so we adopted Rosamond, too.

Other parents might have been distressed, but I was thrilled when Robert and Ralph turned into high-wire artists and ran away with the circus --- an occupation they followed all over the country for several years.

We never struck it rich, but I worked hard at many jobs and provided a good living, including our own home, for the family. For many years I worked as a drayman, with my own wagon. For a time I was superintendent of the new city electrical plant down by Lake Como. And for 40 years, I was Chariton’s “stove man.” Nearly every house back in those days had two or more cast iron cooking or heating stoves. When owners wanted them to shine like new, they called me to come “black” them. When they broke, I fixed them.

Back in 1903, the Knights of Pythias lodge built magnificent lodge rooms on the third floor of the new Temple-Lincoln Theater building on the south side of the square (Hammer Medical Supply is on that site today). You cannot imagine today just how grand those rooms were --- when not in use by the lodge, they were rented out as an events venue. I hired on as janitor, although “events coordinator” might be a more accurate description. In addition to seeing that the place was spotless, I arranged the food service, hired the bands and set up for everything from wedding receptions to a statewide gathering of newspaper publishers. And I was always there, seeing that things went smoothly. The young gents of the Pastime Club were so appreciative of my services in 1916 that they presented me with a gold signet ring.

And I loved to entertain. When Chariton organized a giant celebration called the “Society Circus” back in 1906, I performed in the parade as the “wild man,” riding on top of my cage. The Patriot, in its report of the event, described me as “Chariton’s funny clown.”

I was also the town’s leading “Spieler” --- or barker, much in demand on Saturdays when Chariton’s streets were jammed with folks from the country in town to do their trading. If someone wanted to attract a crowd, or sell something, they got in touch with me beforehand and I showed up with my megaphone and a non-stop line of gab.

When the Nickeldom Theater opened on the west side in 1907, I was there every night on the sidewalk out front pulling in capacity crowds for the moving pictures at a nickel a head.

And of course there was the Fire Department --- I was a volunteer for something like 40 years and, when I moved out here, was the department’s oldest active member.

“Temp was a genial fellow,” old Henry Gittinger wrote of me in The Leader, “liked by all who knew him, and was industrious and energetic. He was unsurpassed as a barker and with his megaphone was a familiar sight whenever his services were required for community affairs or other events. He was one of the early members of the Chariton Volunteer Fire Department and had given faithful service in that organization for over 30 years, being the oldest member of that useful order. He also had been a member of the Knights of Pythias order for many years. He will be greatly missed in this city.”
Posted by Frank D. Myers at 4:08 AM