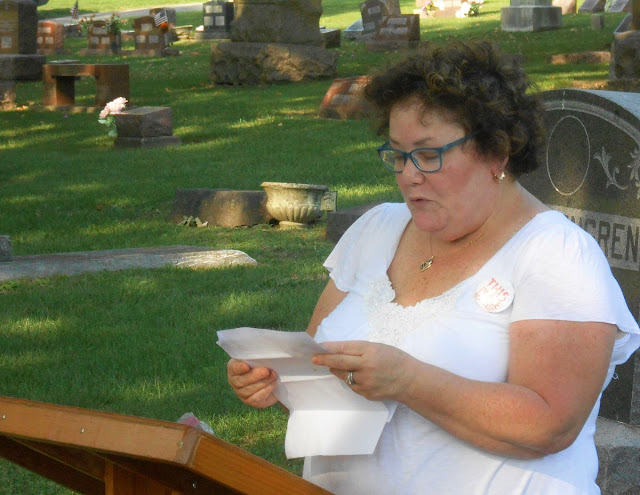 Note: This is the third in a series of five scripts prepared for presenters during Sunday's 14th annual Chariton Cemetery Heritage Tour, "Neighbors in Section E." The subject is Freda Simon Oppenheimer, matriarch of what may have been Chariton's most widely known family at a time when nearly everyone in Lucas County shopped at Oppenheimer's. The presenter is Suse Daniels Cohen, who like Freda herself has deep roots in the Reform Jewish tradition.

Back in 1902, the editor of The Chariton Herald asked dozens of us who were widely known in Chariton to submit favorite quotes for publication in a special edition. I chose this --- “What do we live for, if it is not to make life less difficult for each other?” --- written by Mary Anne Evans, a novelist who published under the male pen name George Eliot, she said, so that people would take her seriously. Women always were taken seriously in my own family, however.

I am Freda Simon Oppenheimer and Mary Anne’s philosophy governed my life as well as those of my immediate family, who rest here in the Chariton Cemetery with me. It also was and remains a guiding principle of the Reform Judaism movement of which we were a part and which helped to shape us.

My husband, Simon, was invited to address this gathering 11 years ago and he spoke a good deal then about the commercial success of the Oppenheimer brand in Chariton. But it’s my turn now and I intend to speak of other things.

I was born Freda Simon, the eldest of Joseph and Henrietta (Loeb) Simon’s four children, on Oct. 9, 1864, in the village of Altleiningen, located in a region of western Germany sometimes called the Palatinate. I had two brothers, Jacob and Morris, and a baby sister, Sadie.

Life for us in Altleiningen when I was a child was not especially difficult. Jews had been “emancipated” in the Palatinate during 1848-50 and few of the old restrictions on our lives and livelihoods remained. But there was an undercurrent of anti-semitism there and the future always seemed to be bordered by uncertainty.

For those reasons, many families encouraged their children to go to America --- filled with unrestricted opportunity. So by 1890, only my parents remained in Germany.

As was the case with most immigrant groups, some led the way then reached back with helping hands to assist others.

In our family, my mother’s cousin, Max Loeb, offered the hand. By 1882, when I was 18, Max and married Bertha Oppenheimer and settled at Albia, Iowa, where he was operating a clothing store. They invited me to join them, and so I did.

While living with Uncle Max and Aunt Bertha, I was introduced to Bertha’s brother, Simon Oppenheimer, then working at his brother-in-law’s store. We were married in Albia on August 25, 1883.

Simon and I lived and worked for a year in Red Oak, then in 1884 moved to Chariton --- a more promising town --- and established what became southern Iowa’s leading retail outlet for men’s clothing.

And once established here, Simon and I began to extend our hands to help others, too. My sister, Sadie, came from Germany to join us in the late 1880s; then Simon’s niece, Josie Berman, also from Germany; and later still, my niece, Josie Simon, after her mother died in Texas. Any stray member of either of our families in need of a job or a bed always could find one at Oppenheimer’s. Our only child, Jerome, who would carry the family business forward for a second generation, was born in 1885.

My sister, Sadie, was introduced in Chariton to Simon’s nephew, Eli Oppenheimer, and they married during 1891. Some years later, Eli joined Simon in the operation of Oppenheimer’s. One of the greatest joys of my life was the fact that my sister and I, separated by my immigration, were reunited in Chariton and thus able to spend our lives together. Eli and Sadie are buried here, too.

AS A FAMILY, we were woven into the civic and social fabric of Chariton. Simon served on the City Council and once, while serving as mayor pro tem, joked that Chariton had just become the first Iowa city to have a Jewish mayor. Sadie and I were active in Eastern Star, P.E.O., the Chariton Improvement Association and the Chariton Woman’s Club. We were too far from Des Moines to participate in temple sisterhood, so I joined the St. Andrew’s Guild; Sadie, the Presbyterian Ladies Aid.

As a hostess, I was a legend --- even if I do say so myself. During January of 1898, The Herald reported that “Mrs. Oppenheimer has added new laurels to her already wide reputation as a thoughtful and resourceful hostess” after a three-day marathon of afternoon receptions for ladies and evening sociables for mixed company.

If I had a weakness, it probably would be the fact that I was house proud. At my urging, Simon and I built a fine new home two blocks south of the Square on Grand during 1895, then 20 years later, a large and fashionable replacement on South Eighth, which we shared with son Jerome and his family. Following Simon’s death in 1930, I designed a new home for myself at 822 Woodlawn and moved there, turning the South 8th Street house over to Jerome, Florance and my only granddaughter, Jerry.

And travel, my goodness did we travel --- by carriage and train at first, then by automobile. We had relatives all over Iowa, including Albia, Knoxville and Webster City, and either traveled to visit or hosted them frequently. Many summer weeks were spent at Lake Okoboji. Simon often was in Chicago or New York on business, and I enjoyed accompanying him when duties here allowed. During 1913, we spent April to October in Europe, including visits to the villages of our childhoods in Germany.

Temple B’nai Jeshurun in Des Moines, Iowa’s first Reform congregation, was the focus of our spiritual lives and we often were there for holy days and on other occasions. But because we were a considerable distance from Des Moines, like Iowa’s other small-town Jewish families --- and there were many of us at that time --- we developed our own ways of observing Shabbat and other occasions at home.

Eugene Mannheimer, Temple B’nai Jeshurun rabbi from 1905-1945 and a giant among Iowa’s ecumenism pioneers, became a close friend of our family and often visited with us and others in Chariton. During May of 1927, Rabbi Mannheimer was selected to deliver the commencement address during graduation ceremonies for the Chariton High School graduating class.

I should mention, too, that many other Jewish families made their homes and operated businesses in Chariton during those years prior to World War II. So we also have the distinction of giving one notable rabbi his start. Rabbi Everett Gendler, son of Max and Sara, who operated a grocery store on the southeast corner of the square, was born in Chariton during 1928. Known sometimes as the father of Jewish environmentalism, Rabbi Gendler has credited his early years here in rural Iowa with giving birth to his interest in that field.

My husband, Simon, died unexpectedly at age 77 on Jan. 10, 1930, and I made the decision to bury him here, his home for nearly 50 years, rather than at B’nai Jeshurun’s Emanuel Cemetery, part of the Woodlawn complex in Des Moines, where many members of his family rest. Rabbi Mannheimer was unavailable at the time, so I called upon the rector of St. Andrew’s Episcopal Church to conduct the funeral.

I continued an active life in Chariton for a number of years after that, dividing my time toward the end between Lucas County and a second home in California. I became ill late in 1942, however, and returned to Chariton to spend my final days with Jerome and his family. I died at the family home on South 8th street on Friday, Sept. 10, 1943. Rabbi Mannheimer, then nearing retirement himself, conducted my funeral service on the Sunday afternoon following at the Beardsley Funeral Home and I was laid to rest here beside Simon.

Our immediate family was very small and as the years passed Eli and Sadie, Jerome and Florance and our son-in-law, Kenneth Hoxton, joined us here. Happily, my granddaughter, Jerry, is alive and well and living in Florida, having attained an age unimaginable to those of us who, when it’s time, will welcome her home.
Posted by Frank D. Myers at 5:35 AM