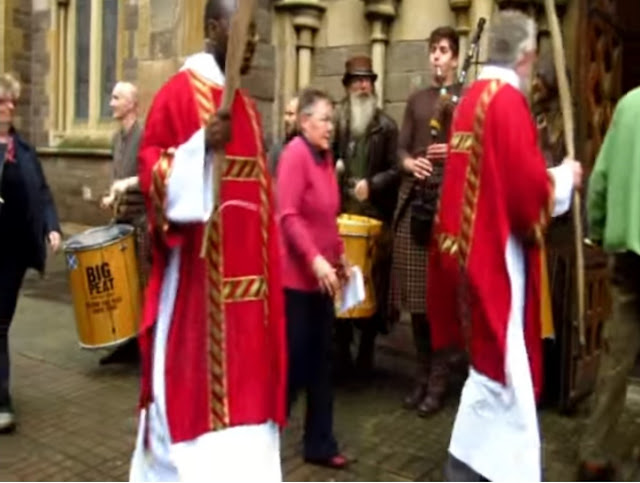 It's Palm Sunday --- and that calls for a processional. With palms.

And pipes and drums, too, if you're a communicant of the Cathedral Church of St. Mary the Virgin (Scottish Episcopal Church) in Glasgow.

Posted this last year, too, and cruised around YouTube looking for something I liked as well, but couldn't find it. So here it is again. It looks like a friendly group, complete with dogs, that you'd be welcome to join.


Did my duty yesterday and changed out the candles in the "big six" sticks that march across the top of the old altar. These had been burning down during lent, by the fifth Sunday therein barely stubs after some months of service.

Changing them out is not as easy as it looks. The big sticks are a century old and candles no longer are made to fit them exactly, so a small amount has to be shaved off a couple of inches of the base of each each candle so that they will slip securely into their appointed places.

Rather than a Palm Sunday sermon, we usually do a "readers theater" version of the passion story using scripts developed at St. Gregory's Episcopal Church in Muskegon, Michigan --- this year according to St. Matthew (Year A according to the Revised Common Lectionary).

I drew Jesus. Fancy that.

Now how the heck do you pronounce, "Eli, Eli, lema sabachthani?"