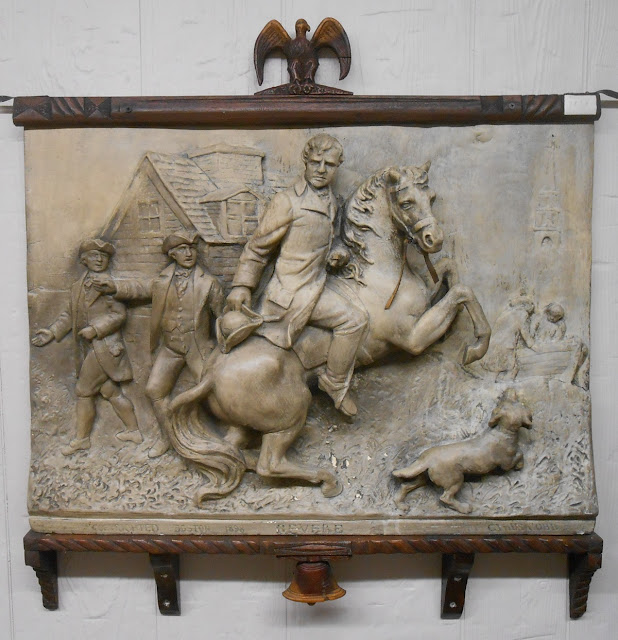 I've been obsessing during the last couple of weeks about rehanging the museum's Irene Garton Library --- getting everything taken down from the walls while the long narrow room was recarpeted, repainted, relighted and rearranged back up in some sort of logical order.

There are more than 50 items of all shapes and sizes, ranging from a vast photo-portrait of entrepreneur Smith Henderson Mallory in gilded plaster frame to an elaborate brass hinge from one of the doors in his long-vanished mansion, the Ilion.

The item above is the only artifact that went back in its original location, unbolted from the wall by Bob and Jim when the project began, then reinstalled (using the same bolt holes) by them in exactly the same place.

It's a plaster relief wall panel entitled "Revere" that reproduces an original created by Boston-based sculptor Cyrus Cobb in 1898, copyrighted by him and then reproduced and sold widely at the turn of the 20th century. The style is sometimes called alto-relievo, or high-relief. In other words, patriot Paul Revere and his horse jump out at you from the background.

Cyrus and his twin brother, Darius, were widely admired artists during the latter half of the 19th century --- Darius painted and Cyrus sculpted. The Revere panel was one of Cyrus's last projects; he died during 1903.

It's an interesting piece in remarkably good condition, other than a small area where the surface has flaked slightly. Lots of our visitors enjoy looking at it --- without really understanding what it is.

But I'm as interested in the frame that supports the panel as in the work itself. This was hand-carved by Boyd Schotte, who donated several of his prized possessions to the museum back in the 1970s when he was preparing to give up housekeeping and move into what now is known as Chariton Specialty Care although many of us still just call it "the nursing home." No one asked him at the time how or when he acquired the panel. 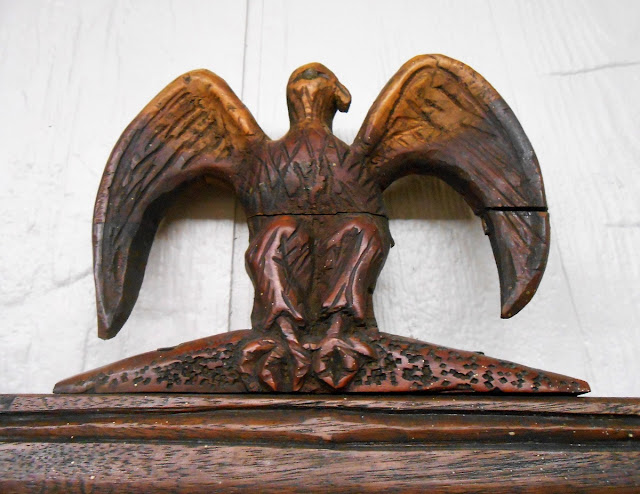 I suppose we'd call the frame "folk art" or "tramp art" today --- but I really like the little image of the Liberty Bell carved at the bottom of the frame and the American eagle at the top. 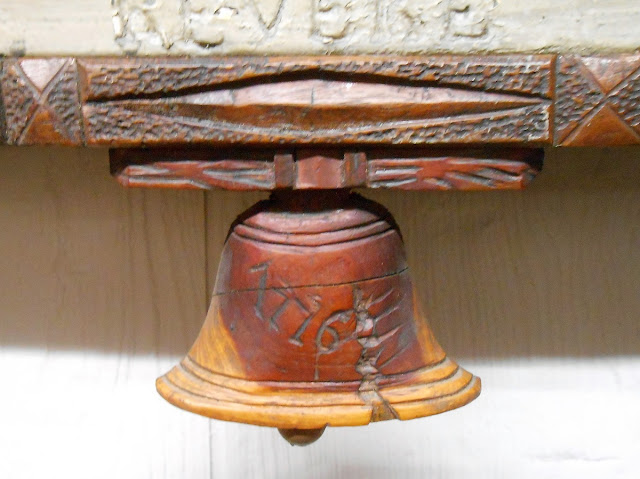 Schotte apparently had many stories to tell about Lucas County's earlier days --- he arrived here at age 2 during 1886, never married and had managed to outlive everyone, excepting a nephew and sister-in-law who lived elsewhere, by 1983 when he died at the age of 99. But not many of them got written down.

The late Elizabeth Tuttle did interview Boyd late in life and her article about him, along with a photograph, was published in the Lucas County Genealogical Society's 1978 history of the county. So there's that.

But Boyd didn't even have an obituary --- just a brief notice in the Chariton newspapers that he had died, that his remains had been cremated and that memorial services would be held later.  These services may or may not have occurred, but his remains were buried on the family lot in the Chariton Cemetery with his entire family --- including parents, three brothers, two sisters-in-law and that nephew, who survived him by five years.

Boyd had been the son who stayed at home to care for his parents, Frederick Schotte, a harness-maker, and Clo (Boyd) Schott, who died in 1937.

A couple of newspaper articles from early in the 20th century suggest that he had considerable artistic talent and that his first work was as a draftsman and designer. Self-employed all his life, he later worked as an upholsterer, furniture-restorer and cabinet-maker, sign-maker and journeyman repairer of glass and other objects.

But that's about all we know. I'd surely like to have heard more of his stories.